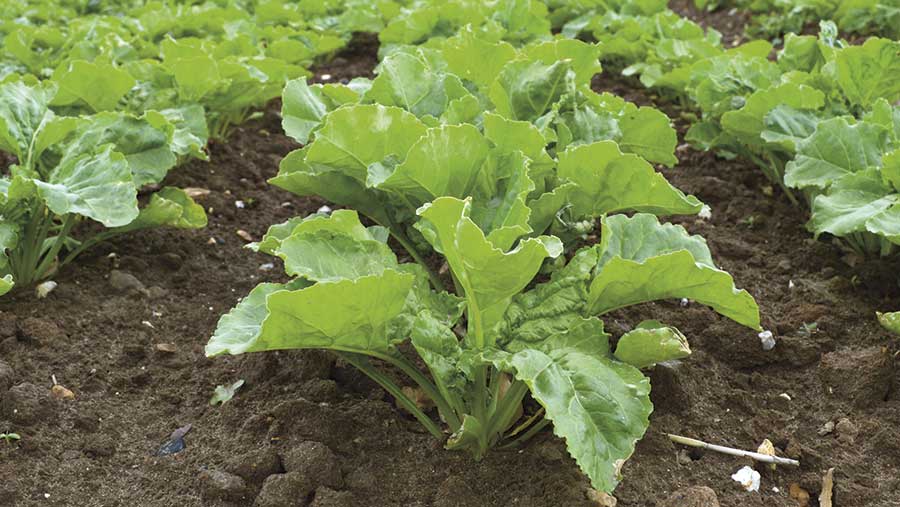 There is a future for sugar beet without neonicotinoid seed treatments, although growers will have to monitor their crops more closely and use other methods of pest control.

If the current ban on neonicotinoid seed treatments is extended to all crops, the British Beet Research Organisation (BBRO) is starting to look at alternative strategies for controlling virus yellows-transmitting aphids, leaf miner and a range of soil-borne pests.

“Currently, we can control fifteen pests in sugar beet with the use of a neonicotinoid seed treatment. It’s a one-stop shop, it works very well and we’ve all got used to that,” says Mark Stevens, lead scientist at the BBRO.

See also: Cereals 2017: Wheat and beet could be hit by extended neonic ban

Should the seed treatments be banned, growers would need to consider the threat posed by aphids, leaf miner and soil pests before coming up with integrated management strategies, he adds.

“Soil pests are easy. We will still have tefluthrin, as in Force, which does a good job on them,” says Dr Stevens.

Leaf miner is becoming a greater issue but continues to be a sporadic pest, rather than causing nationwide damage.

More than 30 crops have been entered into the BBRO’s 2017 beet yield competition, which is being run for the first time this year. The competition aims to help growers reach their maximum yield potential.

Detailed monitoring of crops throughout the growing season is taking place and will continue during harvest and through to the factory.

“For the last couple of years, we have sought and been granted an emergency authorisation to use a foliar application of the neonicotinoid thiacloprid for their control. However, there is also Hallmark (lambda-cyhalothrin), which can be used effectively,” he adds.

Virus yellows, which is a greater risk to UK crops due to the maritime climate and can reduce yields by 25-50%, is a bigger challenge, Dr Stevens acknowledges.

“We are looking at novel insecticides and ways of using them differently,” he says.

The aphicide known as Teppeki, which contains the active ingredient flonicamid and is approved for use in potatoes and cereal crops, is one of those.

“Otherwise, there’s exciting plant breeding work being done on developing virus yellows tolerance, so that resistant varieties can be introduced,” he adds.

But with no single major source of resistance, it involves getting lots of minor genes and consolidating them for three different viruses.

Given that complexity, tolerant varieties are unlikely to be available before 2023-24,  Dr Stevens predicts.

“In the meantime, we will have to improve surveillance and there is a new kit in development to help with that.”

Dr Stevens points to a drip feed of new solutions for pest control, rather than a major breakthrough, but is optimistic about the crop’s future.

“We will have to do more monitoring, especially of aphids. And, as always, farm hygiene remains crucial,” he adds.

New seed treatments and seed technology for sugar beet are on their way from Syngenta, Germains and KWS.

It is expected to be registered for use in the Netherlands by 2018, with UK approval anticipated for 2020 drilling.

Germains has Xbeet enrich100 in trials, a combination of new pellet and elicitor treatment that triggers a plant’s natural defence mechanisms.

This results in stronger plants and leads to greater yield potential compared to existing product Xbeet plus, claims the company, which points to an average yield increase of 1.3% in trials conducted over 10 sites and in four varieties.

Some Xbeet enrich100 will be available to growers for comparison purposes next year, says Jordan Long of Germains.

KWS has Early Plant Development (EPD), a technology that contains a sequence of treatments for rapid germination and even emergence.

The company is working with BBRO and claims that EPD gives results similar to Xbeet plus.

The experts spoke to Farmers Weekly at the recent BBRO open day in Lincolnshire, which was hosted by Patrick Dean Ltd. The farm grows 12,000t of sugar beet on 140ha and has a five year adjusted average yield of 74.12t/ha.