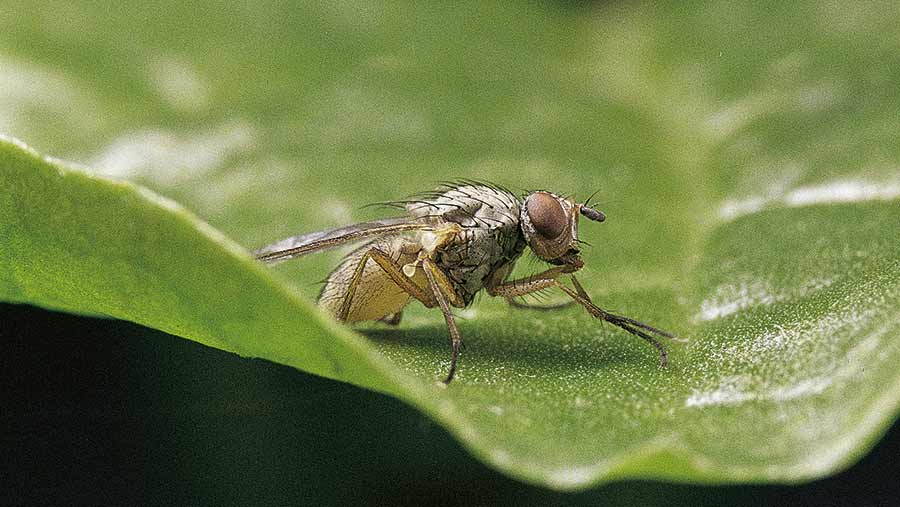 Sugar beet should be carefully monitored for signs of mangold fly presence this summer and treated with a well-timed insecticide spray to avoid significant yield loss.

Growers of outdoor crops will be tired of seeing the negative effects of yet another mild winter, with the UK not experiencing a prolonged cold spell for a number of seasons.

Sugar beet is no different, with growers seeing a significant rise in mangold fly numbers and a widening geographical spread from its original hotspot around Stowmarket, Suffolk.

Just five years ago the pest – also know as beet leaf miner – was largely confined to this one location and caused little economic damage, but 2015 Adas monitoring uncovered its presence from Essex to the Humber, with the highest numbers around The Wash.

“The pupae overwinter in the soil, where they would usually be exposed to both predators and cold temperatures, but we just haven’t had the cold in recent seasons,” he adds.

This has led to increasingly large populations emerging in spring to lay eggs in growing beet crops, leading to rising levels of damage experienced during recent campaigns.

While neonicotinoid systemic seed treatments are crucial in controlling virus-carrying peach potato aphids, they also provide good control of the first of three overlapping generations of mangold fly larvae that hatch through May.

However, these treatments – such as Cruiser and Poncho Beta – run out of steam against the larvae after about 10 weeks, leaving crops susceptible to the second- and third generations through the summer.

The graph (below) displays data from Adas yellow water trap monitoring at sites across the sugar beet area during 2015 and shows two peaks in adult numbers at Holbeach, which give rise to the two most damaging generations, which can destroy up to 70% of the canopy.

These typically coincide with fungicide applications that protect leaf area losses to diseases such as powdery mildew and rust. “It is a double whammy, as you are losing foliage and the benefit of the fungicides.

“The crop can put on a significant amount of autumn growth, which is crucial for maximising yield, and leaf miner can have a significant effect on that,” says Dr Stevens.

Growers lost the use of organophosphate dimethoate to control the larvae in 2013, leaving pyrethroid product Hallmark as the only approved chemical weapon to deploy.

The BBRO successfully applied for an emergency approval last summer for Biscaya, but Dr Stevens tells Crops it is unclear whether it will be repeated for 2016.

This relatively empty chemical toolbox and growing industry concern about the pest prompted the BBRO to commission Adas to look into control options for mangold fly.

The research organisation ran a trial on a high-pressure site near The Wash, just north of Wisbech, and looked at existing and new insecticides and how best to time sprays.

In total, 10 active ingredients with four different modes of action were tested at three different timings, targeting the most damaging second and third generations. 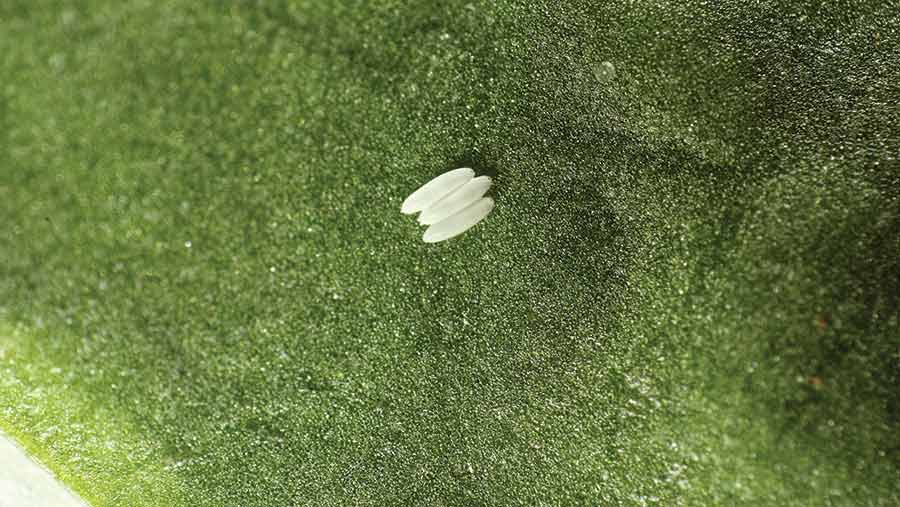 Sprays were applied as adults emerged (T1), as eggs were laid on leaves (T2) and finally as eggs hatched (T3) for each generation.

Adas research entomologist Sacha White says Dursban was the only product to give a consistent reduction of larvae numbers and also significantly reduced the area mined to give a 15t/ha yield response over the untreated plots.

The downside of this result is that Dursban has since had sugar beet removed from its list of approved crops.

“A couple of the coded products also gave a reduction in mining, but perhaps the most reassuring part of the project was that Hallmark was second best and gave a statistically significant reduction of damage in our assessments,” explains Dr White. 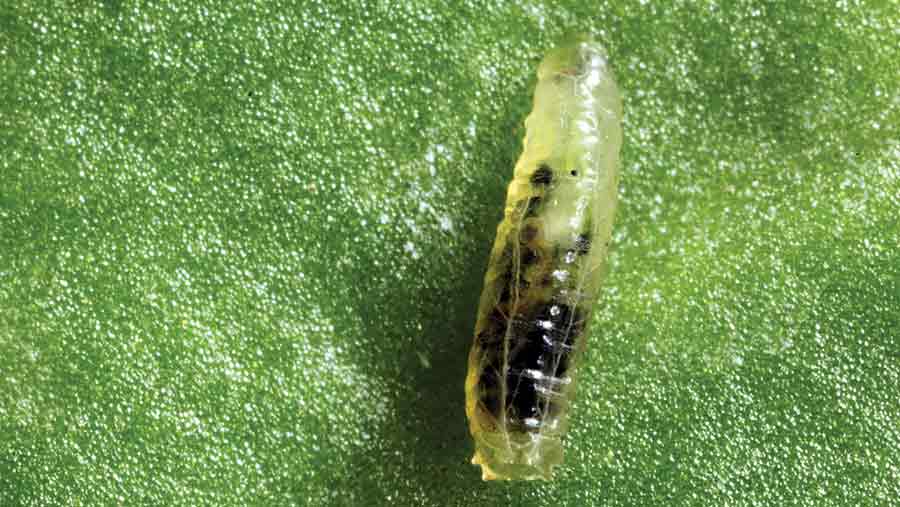 This season – after another mild winter – agronomists and British Sugar area managers are already reporting eggs laid on the underside of sugar beet leaves throughout the beet area, so pressure is likely to be high.

Both Dr Stevens and Dr White agree that as seed treatments run out of steam after 10 weeks, crop monitoring will be critical to assess thresholds and effectively time any necessary insecticide treatments.

The 2015 trial clearly demonstrated that the most effective time to apply Hallmark is as eggs hatch and before the larvae mine into the leaf and start to feed between leaf layers.

Dr Stevens explains that leaf mines from the first generation might be visible, but as they burrow into the leaf they will have picked up and been controlled by the systemic neonicotinoid seed treatment.

Where old mines are present, growers will need to look for fresh leaf damage. “The key thing is to keep an eye on eggs, as they are a good indication of what is going on.

“Look out for egg hatch and fresh mines and if the threshold is exceeded, you can treat with Hallmark,” he adds.

While insecticide applications might be necessary, Dr White urges growers to refer to thresholds and use sprays in a targeted way to reduce the effect on beneficial insects that could assist in control.

He explains there will be a number of predators and parasitoids that have an effect on mangold fly populations and the fewer pyrethroid sprays applied, the better.

“Sugar beet crops were plagued by black aphids last summer and populations suddenly plummeted.
“You could see a lot of mummies and the parasitoids had decimated the aphids, so they have a huge role to play and it is important to target sprays and use as few applications as possible,” says Dr White.

The BBRO and Adas are continuing to monitor the pest and evaluating control methods this season, with the aim to further improve spray targeting, treatment thresholds and develop a better integrated pest-management strategy.

“Its transient nature and overlapping lifecycles means it is difficult to apply cultural controls, but there is anecdotal evidence there are differences in the tolerance of some sugar beet varieties.

“It would be great to have varieties that have something within them that allows them cope with leaf miner, but it needs verification first,” adds Dr Stevens. 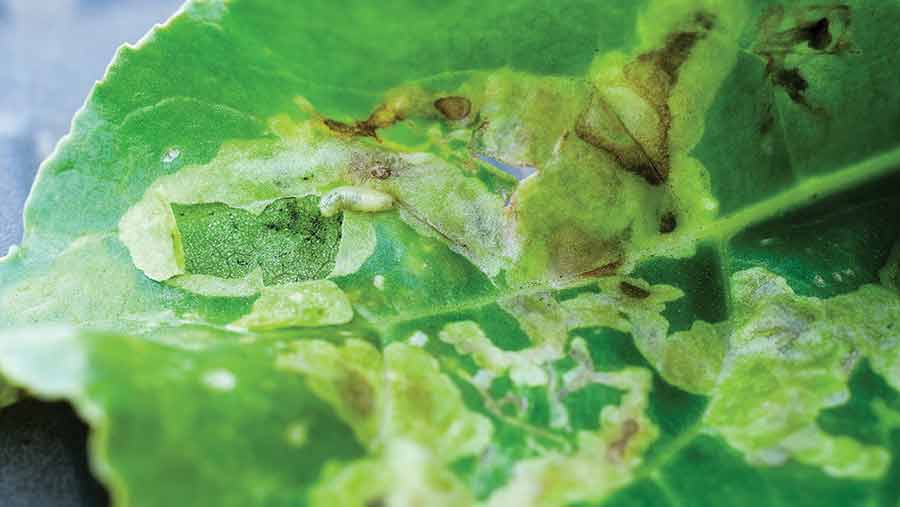