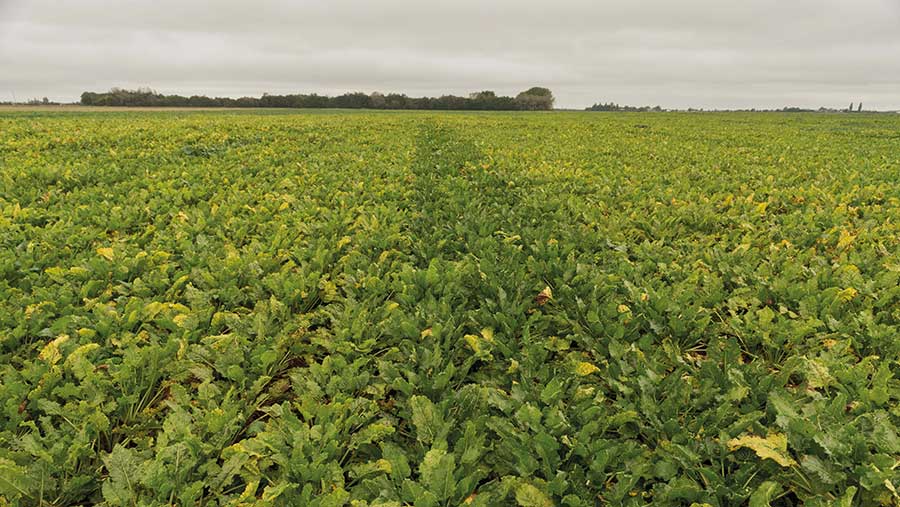 The first sugar beet variety with tolerance to two forms of the virus yellows complex will be available for drilling next spring, along with another five newly approved beet varieties.

The variety Maruscha from breeder KWS has shown tolerance to beet mild yellowing virus (BMYV), as well as a positive response to beet yellows virus (BYV), two of the three viruses in the virus yellows complex.

In the new sugar beet Recommended List (RL) 2022, which saw six new varieties added, Maruscha showed an adjusted crop yield of 93.5% compared with the top-yielding variety on the list at 107.3%.

See also: Gene-edited sugar beet could be grown in UK within five years

However, the new variety could offer a way forward for those growers dramatically affected by the disease, which can cause yield losses of up to 50% in heavily infected crops.

Mike May, chairman of the RL board, says the new list provides varieties with good yields, high sugars and other features such as tolerance to disease, pests and herbicides.

“In addition to having several new varieties yielding closer to the top-yielding BTS 1915, it is also good to see that a variety [Maruscha] with tolerance to some of the yellowing viruses is on the list,” he says.

Virus yellows is a complex of three viruses – BMYV and beet chlorosis virus (BChV), which are closely related, and BYV.

All three are spread by the peach potato aphid (Myzus persicae). There are very few insecticides approved for use to control the aphids in the growing crop.

Ben Bishop, KWS country manager for sugar beet, says Maruscha has shown minimal losses to BMYV infection and respectable losses from BYV – two forms of the virus complex that can inflict losses of up to 30% and 49%, respectively.

“Its tolerance, and that of other varieties as they are introduced, will help to manage the risk, but should be used alongside other measures such as controlling volunteers on spoil heaps as part of an integrated strategy,” he says.

Of the other five new varieties, Katjana, again from KWS, is the second-highest-yielding variety on the list at 102.7% and is tolerant to beet cyst nematodes.

Wren from SESVanderHave and BTS 3020 from Limagrain both offer high yields, BTS 5770 from Limagrain gives the highest sugar content on the list, and Smart Rixta from KWS is an acetolactate synthase (ALS) herbicide-tolerant variety and joins Smart Janninka on the list.

In addition, Mr May says Maruscha and Smart Rixta are not recommended for early sowing (before mid-March), but both have shown low-bolting characteristics when sown after that date in the past three years of RL trials.

Katjana and BTS 5770 produced no bolters in those three years of normal-sown RL trials.

The top-yielding variety on the list remains BTS 1915 at 107.3%. Its breeder’s agent, Limagrain, now has two new varieties on the list.

Newcomer BTS 5570 has good disease resistance, especially for rust and powdery mildew, along with the highest sugar content on the list at 17.6%.

BTS 3020 is the “early bird” variety within the Limagrain portfolio, having consistently delivered three years of very low bolting counts in the early-sowing period before 5 March.

“This result has been consistent over the past three years, including data from 2020, which we know was a higher year for bolting,” says Ron Granger, arable technical manager for Limagrain UK.