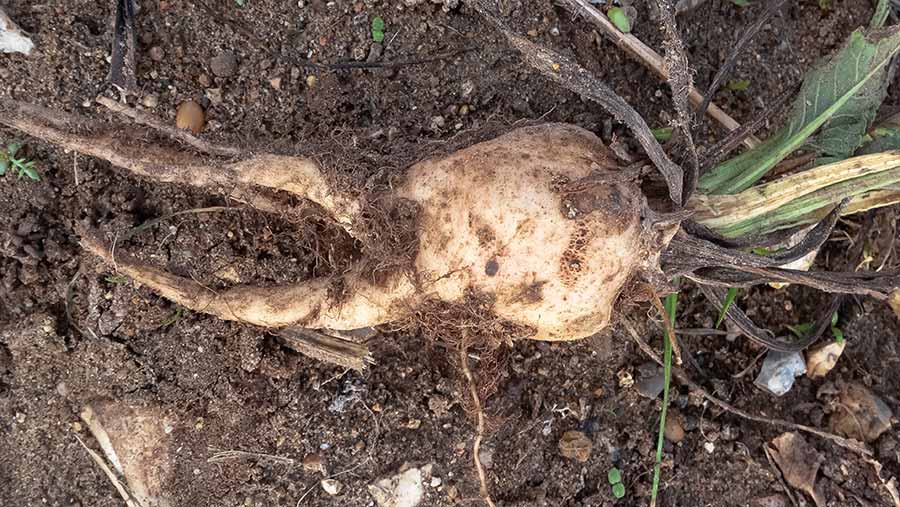 For many years, growers could use Vydate (oxamyl) to manage free-living nematodes in fields with a history of docking disorder.

But last year, the UK government decided not to reauthorise the use of the pesticide, resulting in its withdrawal on 28 February 2021, leaving growers with no way of managing the problem.

Docking disorder is the name given to the symptoms of free-living nematode damage characterised by stunted plants, root fanging and reduction in root size.

It is named after a village in the north-west of Norfolk where the condition was first recorded, and can cause yield losses of up to 50%.

Damage is usually more common on light, sandy soils and is more severe in years with heavy rainfall in the spring.

However, following work by the British Beet Research Organisation (BBRO), manufacturer Ecospray and distributor Certis Europe, the Health and Safety Executive has granted authorisation for NEMguard DE in sugar beet.

It is a granule formulation containing 450g/kg garlic extract, which is applied at drilling via a granule applicator.

“In conjunction with manufacturer Ecospray, we established three in-field strip trials in 2021 to compare the garlic-based product against Vydate, and untreated controls, on free-living nematode vulnerable sites,” says the BBRO.

Following these trials in 2021, the organisation says it is confident the product works as well as Vydate for managing the pest.

BBRO initially recommends a rate of 10kg/ha of NEMguard DE for 2022, “as we believe this will provide adequate protection of crops.”

However, BBRO adds that the rate may be refined over time and could reach up to 20kg/ha (the maximum label dose) following further research.