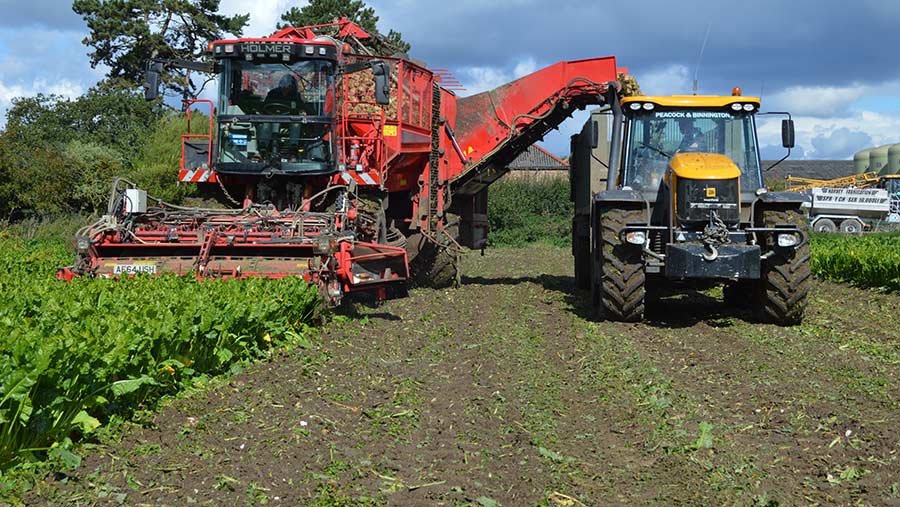 Sugar beet yields are hitting 100t/ha along the north Norfolk coast, with crops bolstered by a good level of rain and sun throughout the summer and autumn.

Tom Dye, managing director at Albanwise Farming, has lifted about one-third of his 300ha of sugar beet at Green Farm, Saxlingham, three miles west of Holt.

“It’s been a good year, perhaps not a record one, with current yields of about 85-100t/ha,” he told Farmers Weekly.

A record average yield on the 1,940ha north Norfolk farming unit of 100t/ha was hit in 2014. All the beet is delivered to British Sugar’s factor at Cantley, south-east of Norwich.

Closer to the coast, the Holkham Estate is seeing good yields of more than 80t/ha, with nearly one-third of its 260ha of sugar beet lifted.

James Beamish, farm manager of the 2,300ha in-house-managed arable land, said yields are averaging in the high 80s, despite the crop being drilled late, and this compares well with Holkham’s average yields of 70-75t/ha.

“It will be a record year at Holkham if these yields turn out to be the average for the year,” he said.

Beet processor British Sugar is forecasting a bumper crop this season “in excess of 1.4m tonnes” of sugar from its 3,500 growers helped by favourable beet growing weather.