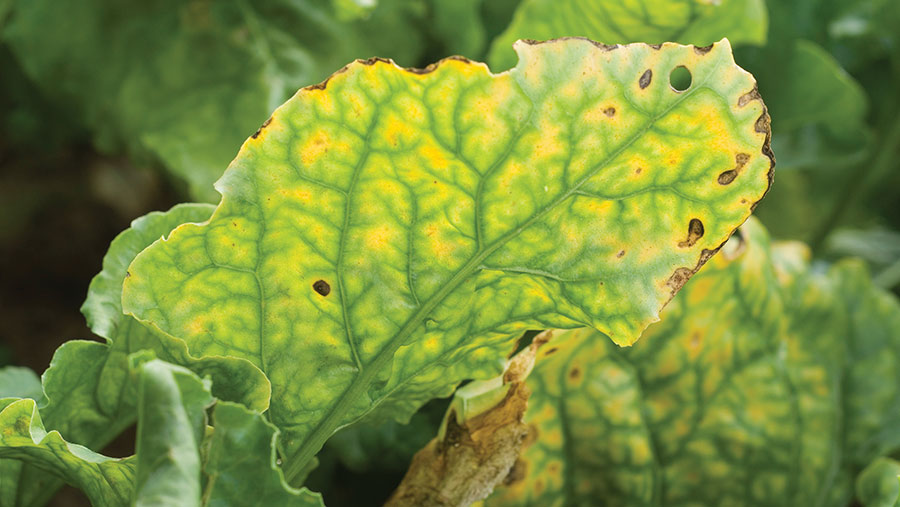 Sugar beet growers ravaged by virus yellows could find out before Christmas whether they can use neonicotinoid-treated seed to help grow the crop next spring.

It comes amid mounting concern that farmers are deciding to not grow the crop next year. Sugar beet yields this autumn have been devastated by virus yellows – the disease was previously controlled by neonicotinoids before they were banned last year.

An emergency application for farmers to use the Cruiser SB neonicotinoid treatment in 2021 was discussed this week by the UK Expert Committee on Pesticides, which provides independent, impartial advice to the government.

A decision on whether to grant approval for Cruiser SB to be used on crops most at risk from virus yellows could be announced by mid-December. But that could already be too late for some growers.

Suffolk farmer Stephen Rash is among those growers who have decided to stop growing beet. He said it was an emotional decision because beet had been grown for almost 100 years on the family farm at Wortham, near Diss.

Mr Rash said he was losing £200/ha this year. “Virus yellows is reducing yields and sugar content – it means we have to use far more broad-field insecticides than we have ever had to use before, which we are not happy about,” he added.

Low beet prices, bad autumn weather and soil damage by heavy machinery had also contributed to the decision to stop growing the crop, said Mr Rash. But he added: “It is mainly the virus yellows infections which have pushed us over the edge.”

NFU Sugar chairman Michael Sly said other growers were in a similar situation. Yields were down by 50% in some areas. “It’s quite a shock and catastrophic for many farmers – it’s a big reduction.”

Farm business consultant Guy Bicknell, of Wilson Wraight, said growers were finalising rotations for next year. Deciding whether or not to grow beet was an important but difficult decision given the level of virus yellows.

“You’ve got to look at what you think your remaining sugar beet crop is going to yield – and also we don’t know what sort of frost we are going to get over the winter to take out some of the pests that will cause us problems.”

Neonicotinoids were banned across Europe over concerns that they kill bees and other pollinators. But growers in France will be allowed to use neonic seed treatments next year. Similar derogations have been announced in Belgium, Spain and Poland.

Nick Morris, head of central agriculture at beet processor British Sugar, suggested the UK government should take similar action. It was important there was a level playing field when it came to pesticide availability, he said.

British Sugar has earmarked £12m over three years to partially compensate growers who lose sugar beet due to virus yellows. But the scheme only covers up to 45% of the loss, with compensation being capped at a 35% yield loss.