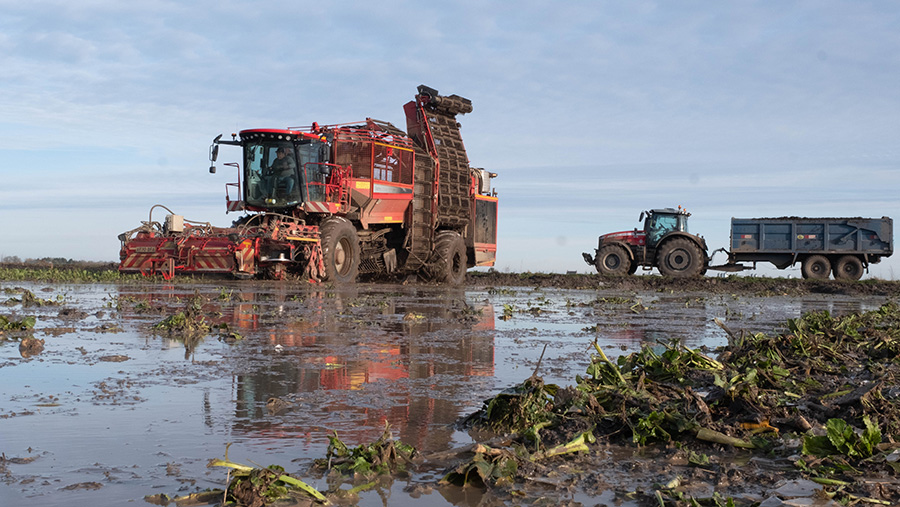 Beet lifted by contractor Richard Ivatt yielded 48t/ha at 15.5% sugar content, compared with 85t/ha and more than 17% sugar in an average year at Deeping St Nicholas, near Spalding.

See also: How emergency authorisation for neonics in beet will work

Almost half a year’s rain has fallen in parts of the Fens during December (123mm) and January (104mm), leaving many farms with flooded fields and crops under water.

It has been a challenging year for sugar beet, in particular, with yields already suffering due to virus yellows disease.

Although January wasn’t an exceptional month for UK precipitation as a whole, some parts of the country saw much more rain than others.

Mark McCarthy, head of the Met Office’s national climate information centre, said: “Several areas of England and Scotland saw more than double the amount of rainfall for a typical January.”

Loftus in North Yorkshire had more than three times its normal January rainfall.

With an average temperature of 2.2C, it was the coldest January across the UK since 2010.

In that year, the average UK January temperature was 0.9C – but the coldest January on record was 1963 with a mean temperature of -1.9C.

January was also the coldest calendar month since March 2013, which also recorded an average temperature of 2.2C.

Mr McCarthy said: “A winter month as cold or colder than January 2021 used to occur in approximately seven out of 10 winters through the 20th century.

“In more recent decades this has dropped to around three in 10.

“So, although we are still subject to cold weather in winter, these cold spells tend not to be as severe or as frequent as in the past.”