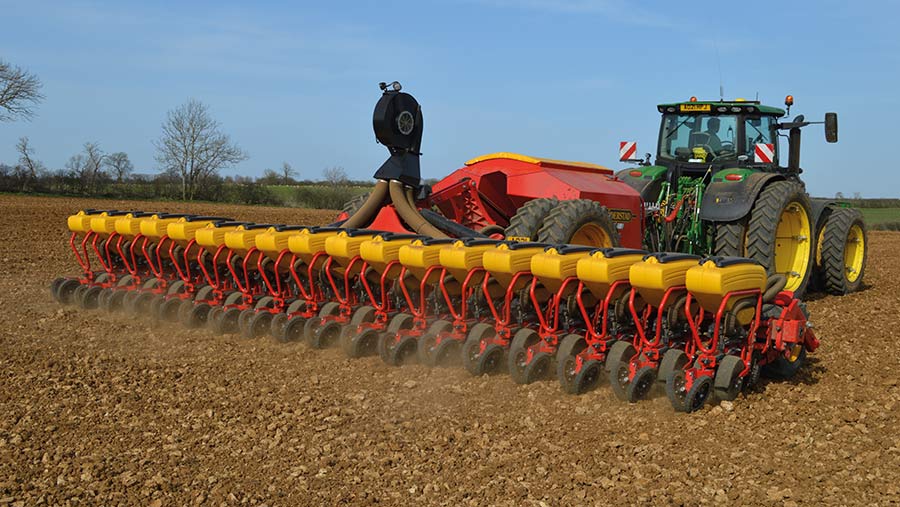 Sugar beet drilling is racing ahead in south Lincolnshire in dry spring weather with two-thirds of the national crop expected to be in the ground by the Easter weekend.

First-time grower Matthew Wallace is planning to drill 80ha on his lighter land as a partial replacement for oilseed rape, with the beet being sown in near ideal conditions.

He is rejigging the rotation at Buckminster Farms, which straddles the Lincolnshire-Leicestershire border, to get on top of blackgrass and cope with the absence of oilseed rape.

“Sugar beet is good as a blackgrass break crop and if we follow it with spring barley we will have a double spring break to cope with the blackgrass,” he says.

The 80ha of sugar beet on his light limestone brash soil was being drilled by contractor Edward Plowright with his new 9m Vaderstad Tempo high speed precision drill, which can drill up to 100ha in a good day.

Mr Plowright started drilling sugar beet for his clients on March 24 and usually clocks up about 1,600-2,000ha every spring from his base in the village of Barnstone, between Grantham and Nottingham, and trades as JP Plowright & Son.

The 200ha-plus he has drilled so far has gone into the ground well in good seed-bed conditions, but this is on the better drained lighter land, with heavier soils still to drill.

“This spring, drilling conditions are better than last spring, and we are also drilling earlier than last year,” he says.

Nick Morris, head of central agriculture at beet processor British Sugar, says the sugar beet crop area is expected to be down after a very difficult growing season in 2020 when yields and sugar production tumbled.

“The area is estimated to be down 10% this season, with some of the marginal sugar beet land being taken out,” he says.

Mr Morris adds that drilling conditions for England’s 3,000-plus growers across the east of the country have been “fantastic”, with two-thirds expected to be drilled by the Easter weekend, and virtually all by the following weekend, weather permitting.

Mr Wallace is a newcomer to the sugar beet crop on the 3,000ha of arable land he manages, growing cereals along with winter and spring beans, based in the village of Buckminster, just south of Grantham and to the west of the A1 trunk road.

At one time, the farm grew as much as 1,200ha of oilseed rape before a combination of cabbage stem flea beetle damage, blackgrass and slugs forced a retreat, and no rapeseed is being grown this season.

Now the oilseed rape is being replaced on the lighter land of the estate by the 80ha of sugar beet and also 80ha of winter linseed. Some of Mr Wallace’s neighbours had started growing sugar beet over the past two or three years so he has decided to try the crop.

“Sugar beet is a low margin crop, but it can produce some good yields and crop rotation is very importance to us,” he says.

Mr Plowright was drilling the crop with his 9m drill, producing 18 rows at 50cm spacing, with a 15.5cm spacing between the seed along the rows, to give 128,000 seeds/ha.

Last season’s beet harvest is forecast to see sugar production fall nearly 25% due to a severe hit to yields from the aphid-spread virus yellows disease and poor weather conditions.

This season, the threat of virus yellows is much lower following cold winter weather which has limited the number of aphids expected to enter crops.

In early March, Rothamsted Research estimated that only 8.37% of the national sugar beet crop would be affected by virus yellows by the end of August 2021, below the 9% threshold that would have allowed growers to use neonicotinoid-treated seed.

Neonicotinoid insecticides, which have been used to control the virus-carrying peach-potato aphid (myzus persicae), are currently banned from use in sugar beet because of concerns they may kill bees and other pollinators.

This will be the third season without the use of neonicotinoids in sugar beet following their withdrawal from use as seed dressings for cereals and oilseed rape.

The independent researcher also forecast that the first aphids will reach crops from May 18 this year, a lot later than in 2020 when aphids were seen in crops soon after emergence.

This is likely to give sugar beet crops more time to reach the 12-true leaf stage when they achieve “mature plant resistance” and so are significantly less susceptible to virus yellows.

Mr Morris highlights that although the risk is much less this season, aphid levels will be monitored by the British Beet Research Organisation (BBRO) to give an early warning of any increased threat.

Growers can still use one spray of flonicamid (Teppeki) insecticide to control the aphids in a season, and there are hopes that there may be emergency authorisations of two other products. 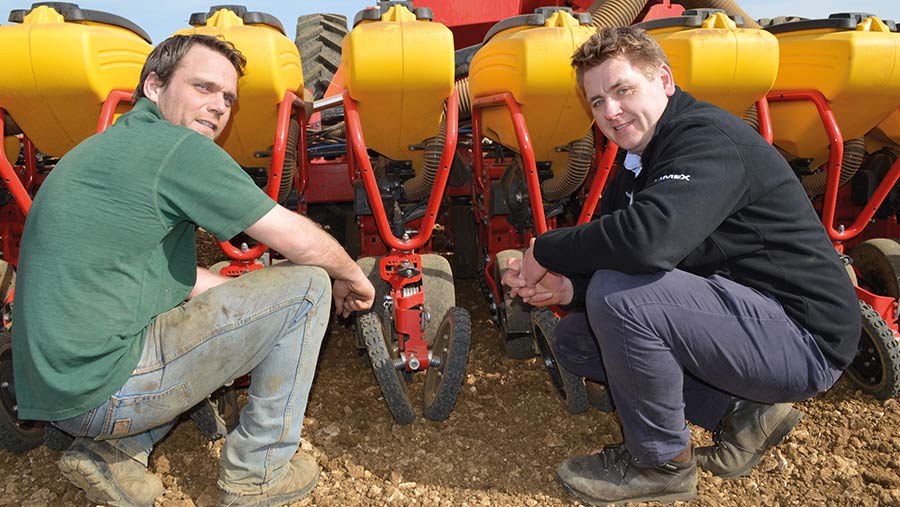 Last year, the most seriously affected crops were in the Wissington factory area in west Norfolk and the northern part of the Bury St Edmunds factory area.

Mr Morris points out that a new variety, Maruscha, which has tolerance to two of the three viruses that makes up the virus yellows complex, is a very exciting development for the future.

The variety will be available for drilling in 2022 after its inclusion in the latest BBRO Recommended List for 2022, and although lower yielding than many other varieties, it may be useful for growers in virus yellows danger areas.