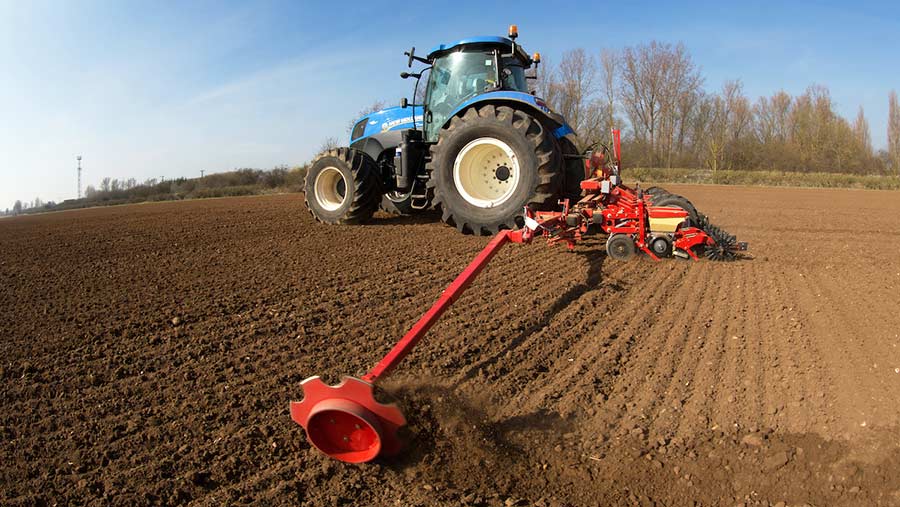 Growers aiming for the highest beet yields should get drilling in early March, providing that soil conditions are suitable and no cold weather is forecast.

That means swinging into action as soon as possible after 1 March, with the target of having the entire operation completed before the end of the month.

“There’s a drop in yield as drilling moves in to April,” explains Simon Bowen of the British Beet Research Organisation (BBRO).

“If you get delayed until after 10 April, there will be an average yield loss of over four adjusted tonnes per hectare a week.”

However, there is a risk of more than losing that yield advantage when conditions are less than ideal. Last spring was a good example, with a cold spell in late March/early April pushing drilling into May.

For new sugar beet growers and those returning to the crop after a break, a key drilling indicator is soil temperature.

It ensures that you minimise the risk of bolting – as well as slow and variable emergence – by not drilling too early.

Although germination will start where soil temperatures are above 3C, it will be slow while the soil is colder than 5C.

It will also be adversely affected by heavy rainfall occurring within 48 hours of drilling, as plant emergence is impeded by the resulting soil capping or crusting.

“The better the seed-bed structure, the more easily it can cope with heavy rainfall,” adds Dr Bowen. 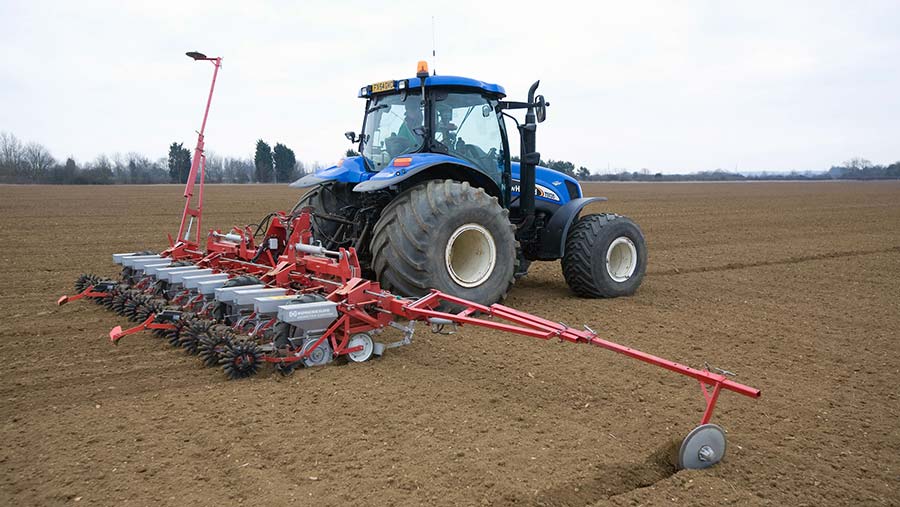 “In the spring, use a spade to check whether soils are dry enough below the surface and use a soil temperature probe to check that there is sufficient warmth in the soil. Patience is key – you are better to wait until the conditions are right.

“The decline in yield as a result of late planting can be the lesser of two evils compared with forcing a seed-bed, especially if we have torrential rain like we did in June last year.”

Aim to establish 100,000 plants on every hectare sown, with an even distribution of plants across the field – or yields are likely to suffer, he advises.

Establishment is when the majority of plants have reached the critical 6-leaf stage.

“We have very good data to show that yields are optimised at 100,000 established plants per hectare and we know that establishment is typically between 70-80% of the seed population drilled,” reveals Dr Bowen.

“Drilling at 1.25 units/ha (1 unit = 100,000 seeds) will help compensate for these losses and ensure you hit this target plant population.”

Growers that end up with fewer established plants than expected will find that the crop is less able to compensate for the impact of weeds, pest and diseases, as well as the effect of poor weather conditions.

“Remember that establishment is often lower on headlands or where seed-beds are poor. So you may need to use higher seed rates in these areas,” says Dr Bowen.

To predict percentage establishment, growers should use knowledge of existing and expected factors that can affect germination and seedling growth.

Uncovered or shallow-drilled seed is at risk of being eaten by mice, while birds and small mammals can graze small seedlings and remove the growing point.

Otherwise, seedlings are prone to pest and disease attack pre- and post-emergence, as well as being at risk from extreme weather events such as a heavy frost. 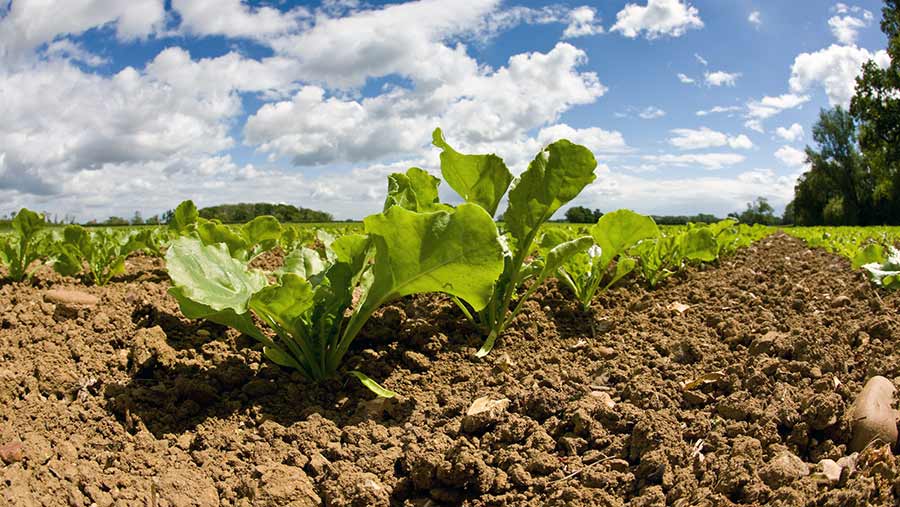 “Most of the seed sold in the UK has in excess of 95% laboratory germination,” notes Dr Bowen.

“In the field, germination depends on the quality and moisture content of the seedbed, as well as its temperature.

“That’s why the majority of growers will see establishment of 70-80%. A good, even population has advantages with weed control, sugar percentage, impurities and harvesting, as it has better leaf cover and radiation interception.”

Growers are encouraged to measure their plant population at establishment by counting plants along a measured length of row.

This helps to assess how successful seed-bed preparation and drilling has been, with a low count indicating that the crop may not reach its potential

For crops on 50cm row spacings, that means measuring out a 20m row of sugar beet and counting the plants within that row, before multiplying the number by 1,000 to give the plant population.

With 45cm row spacings, a 22m row of sugar beet should be used. 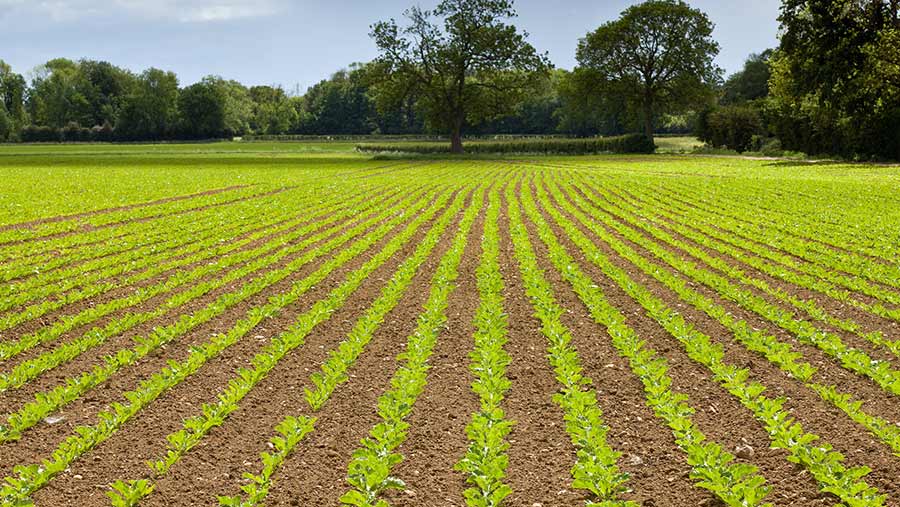 “Investigate any reasons for poor establishment if your figure is below 70%,” recommends Dr Bowen.

“It will help you make a better estimate of seed rates required in future years.”

Most sugar beet is drilled in 50cm or 45cm rows, with the ideal spacing being 16cm, he points out.

“You can match seed spacing to your establishment conditions, by making use of your predicted establishment figure and the BBRO Reference Book tables.”

Providing primary cultivations have dealt with previous crop residue, improved drainage and provided the foundation for a fine, uniform seed-bed, a single pass in the spring can be used to create a level, consolidated seed-bed.

However, the timing of this pass is very important, as there’s a need to balance earliness with avoiding excessive compaction, which means soil moisture must be at the correct level, Dr Bowen notes.

“Prepare a seed-bed to a depth of 5-7cm. Ideally it should have a high proportion of small particles in the planting zone, so that you get good seed-to-soil contact.

“Below this top layer, you need a more open soil structure with some larger aggregates.”

With all passes, Dr Bowen says, the aim is to prevent the soil balling up and losing the crumb.

“If you are using more than one, allow the soil to haze between passes and straddle the first pass wheelings.”

In good conditions, the use of a combination harrow working at a depth of 7-9cm will create the right depth of seed-bed.

If non-inversion tillage is preferred, the previous crop’s straw should be either baled and removed or chopped and spread, leaving a stubble length of about 15cm.

“You may need to do a shallow cultivation to help with weed germination, before the main cultivation,” Dr Bowen says.

On heavy soils in less-than-optimum conditions, it may be necessary to use a combination harrow on the front of the tractor and a power harrow behind to carry out two passes in one travel of the field.

“Only consider rolling after drilling if the seed-bed is cloddy or the seed is exposed,” says Dr Bowen.

For further information on all aspects of the sugar beet crop, consult the BBRO Reference Book: A Comprehensive Guide to Sugar Beet, which can be downloaded from the BBRO website.