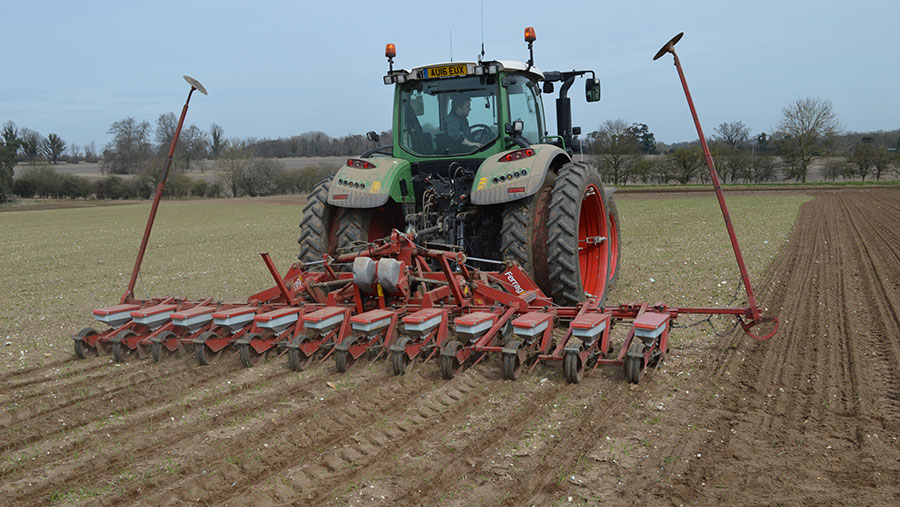 After a wet winter, light beet land has dried up quickly, leaving a dry surface with plenty of moisture below, and early-drilled crops are already through the surface.

Tim Harper, commercial director of the Blankney Estate in Lincolnshire, says his team drilled 450ha of beet in a 10-day window in late March, mostly on light limestone brash land south of Lincoln.

“We are very happy with the drilling, especially considering the very wet weather we saw in February,” he says.

The beet seed has hit good moisture on 85% of his land and, ironically, after the winter deluge, the remainder on the lightest land could do with 10-15mm of rain.

The 5,800ha estate is the biggest single supplier to British Sugar’s Newark processing factory, and this season’s drilling started about 10 days later than normal due to a very wet February.

Further south, drilling also finished last weekend at Euston Estate in the heart of the Suffolk Brecklands on its light, blowaway sandland.

Matthew Hawthorne, farm manager of the estate, and his team drilled 350ha of beet with 20-30% of early-sown crops showing young plants through the ground.

“It’s the best beet I’ve ever put in; the soil surface is dry with plenty of moisture below, making for an excellent seed-bed,” he says.

On the very lightest land, winter barley seed is drilled in the early spring to act as a cover crop to stop soil blowing away at sugar beet sowing time.

The 4,200ha estate, just a few miles south of Thetford, had a good sugar beet harvest last season, with average beet yields of 71t/ha, an improvement on its five-year average of 65t/ha.

Nick Morris, head of central agriculture at beet processor British Sugar, says about two-thirds of the crop is now drilled, with the expected beet area up 4% at 104,000ha, from just over 100,000ha last year.

After a slightly later start than usual, good winds through March have helped land dry out quickly on all but the heaviest of soils.

“The crop has gone in really well and it’s been a great start to the season, with drying winds in March leading to a continuous drilling period unbroken by bad weather,” he says.

The group has been working remotely with its 3,000-plus growers – especially its 18 contract managers – during the current coronavirus epidemic.

Last season’s harvest is nearly all complete, with the last of its four beet plants at Newark in Nottinghamshire due to close on 9 April. The other three plants at Bury St Edmunds in Suffolk, and Wissington and Cantley in Norfolk are already closed.

The harvest is expected to yield a higher sugar output due to improve beet yields, which are expected to exceed the 75t/ha five-year yield average.