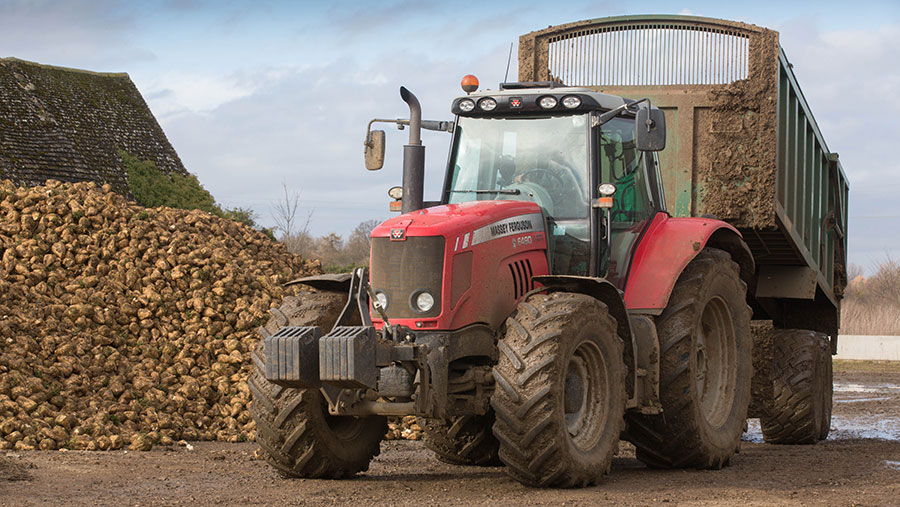 The sugar beet harvest is set to see sugar production fall nearly 25% this season due to the severe effect on yields from aphid-spread virus yellows disease.

Sugar beet processor British Sugar said that just over two months into the beet harvesting campaign, white sugar production is forecast at 900,000 tonnes, some 24.4% down on last season’s 1.19m tonnes.

Only a month ago in early November, the group said sugar production would fall more than 10%, but damage from the virus is worse than first thought with some beet yields down 50% in some areas, hence the downgrade.

He added that within the group’s four factory areas, Wissington in west Norfolk, which also covers south Lincolnshire and Cambridgeshire, was worst affected.

“All the factory areas have been affected, but Wissington to a greater extent and Cantley to a lesser extent,” he told Farmers Weekly. Cantley is in east Norfolk, while the other two factories’ areas are around Bury St Edmunds in Suffolk and Newark in Nottinghamshire.

British Sugar parent company Associated British Foods highlighted the problem at its annual general meeting late last week. “Our forecast for UK sugar production for 2020/21 is now 900,000 tonnes, lower than previously expected and well down on last year’s 1.19m tonnes, due to the severe impact of virus yellows disease on sugar beet,” it said last Friday.

The 3,000-plus sugar beet farmers in England who grow 103,000ha of beet have suffered from the high number of disease-carrying aphids moving into their crops in the spring and early summer which led to a yellowing of sugar beet leaves and the resultant lower yields.

This is the second season that beet growers have had to grow the crop without neonicotinoid insecticide seed treatments, and they have a limited number of sprays they can use to try to control aphids. The seed treatment provided protection against the myzus persicae (peach potato aphid) which transmits the virus for about 10-12 weeks after planting.

Neonic seed treatments are banned across the European Union, including for oilseed rape and cereals, over concerns they may kill bees and other pollinators.

In addition, growers have suffered a difficult season as crops were often drilled late after a very wet winter, then were hit by a spring drought leading to some poorly established crops, while a generally dull summer limited further growth.

France has also suffered big yield losses this season and the government there is planning a derogation to use neonic seed treatments for the 2021 season and if necessary for 2022 and 2023. Similar derogations have been announced in Belgium, Spain and Poland.

Farming unions in the UK have urged Defra secretary George Eustice to introduce a similar derogation in the UK, and beet growers could find out before Christmas whether they can use neonic-treated seed next spring.

British Sugar has promised £12m over three years to compensate growers who see yields hit badly by virus yellows, but the scheme only covers part of the estimated yield loss.