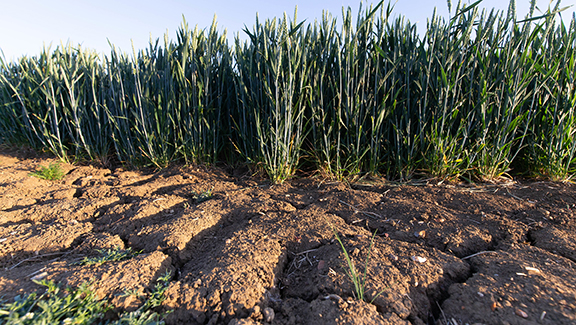 Britain’s farmers and growers face an increased risk of drought this summer despite recent rain, as river levels are low and high temperatures are forecast.

Scientists warn that, unless there is a sustained period of wet weather, there is a risk to crop yields and likely water restrictions in areas where irrigation is used.

Jamie Hannaford, principal hydrologist at the UK Centre of Ecology and Hydrology (UKCEH), says unsettled weather in June has not reversed the low water levels seen at the end of May.

“There is still an elevated risk of a potential for drought conditions unless we get sustained heavy rainfall,” he tells Farmers Weekly.

The UK is moving into summer with recorded river flows down sharply for May, and in some western rivers lower than in the major drought years of 1984 and 1976.

Record lows were seen in the River Severn and Wye catchment areas, which saw severe flooding in February, while reservoir stocks across the country were down 15-20% on normal levels at the end of May.

Analysis by the independent research body suggests below normal river flows will persist for the next three months, particularly in the north and west of the UK, and in the south and east of England, groundwater levels will be mostly above normal following the wet winter.

UKCEH fellow hydrologist Katie Muchan says the exceptionally dry soils and low river flows are concerning, especially coming after significant flooding in many areas of the UK as a result of the wettest February on record.

“There is now an increasing risk of reduced crop yields and potential water use restrictions if the lack of rainfall continues, and the forecasted high temperatures materialise,” she adds.