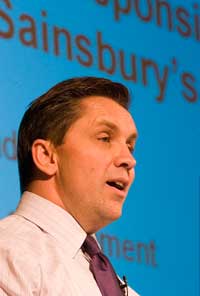 Supermarket bosses are adamant that there is no need for a grocery ombudsman and deny they have any role to play in advocating GM technologies.

The challenge for supermarkets to “step up to the mark” on these issues was laid down by NFU president Peter Kendall at this week’s IGD annual convention in London.

Mr Kendall applauded the leadership supermarkets had shown in promoting the Red Tractor logo, which had enjoyed a 60% increase in just three years. And the development of dedicated supply contracts had given milk producers a real confidence boost, he said.

But he called for retailers to change tack and give their backing to the creation of a supermarket ombudsman, to enforce the grocery supply code of practice.

Unless supermarkets agreed to this voluntarily, the Competition Commission would have to recommend that the Department for Business Enterprise and Regulatory Reform establish an ombudsman.

Mr Kendall insisted that such a move was essential, not just for suppliers, but to protect the long-term interests of consumers. Retailer lobbying against an ombudsman was counter-productive.

“Farmers have a reputation for being the biggest whingers in the food chain,” he told the conference. “But judging by the comments I’m picking up around Whitehall, it won’t be long before retailers take our mantle.”

“We support the code of practice – indeed we had our own code long before this was introduced,” he said. “The new code (introduced in February) now covers 10 major retailers, rather than just the big four, and addresses all supplier and consumer concerns.”

Mr Kendall also called for supermarkets to take a lead in explaining the potential benefits of GM crops. “Your involvement will be critical in moving the debate on, to everybody’s benefit,” he said.

But Mr King insisted it was up to government and scientists to justify the use of GM crops, not food retailers or manufacturers. “The retail food industry is merely reflecting where public opinion currently is,” he said.

In fact, IGD research had shown that most consumers were still open-minded, he added. “Where GM’s failed first time round is that there was no articulation as to why they might be good for consumers, only an articulation of why they were good for farmers and biotech companies.”

For a comment on the Ombudsman, see Phil Clarke’s Business Blog