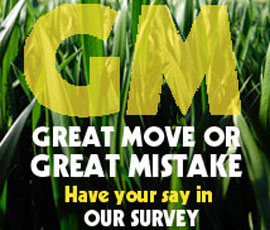 Some 61% of British farmers would grow GM crops if it were legal to do so, a Farmers Weekly survey has revealed.

The survey, conducted in association with Barclays Bank, gathered opinions from more than 600 farmers across the UK.

The results have revealed that GM technology remains a polarising issue for the farming industry.

While 61% said that given the opportunity they would grow a GM crop, 39% said they would not. Some 47% believed that GM technology was a good innovation – needed for UK agriculture to maximise output and profitability – while 26% would under no circumstances grow GM crops.

For those happy to grow GM crops the key advantages (see table 1) were perceived to be reduced environmental impact, putting UK farmers on a level playing field with those farmers already growing GM crops overseas and a decreased cost of production.

For those not willing to grow GM crops, the key disadvantages (see table 2) were perceived to be public resistance to the technology, the fact that the technology was unproven and its long-term effects poorly understood, and that the GM market is controlled by a few large corporates.

To put these pros and cons in context, we asked farmers to name the main factors affecting the performance of their business. Some 80% said the weather was the main limiting factor, 52% said the cost of inputs and 40% said soil type and local geography.

Other less significant limiting factors were the availability of capital, yield limits, labour and limits of chemistry.

While a majority felt positive about growing GM crops, 52% felt that to date the technology had over-promised and under-delivered.

Many of those saying why they wanted the technology said they would like to see more progress and uptake of innovative technologies in agriculture to “feed the world”. However, there remains a scepticism about the way GM technology is controlled and applied.

When asked whether their views on GM technology had changed over the past 12 months, 32% said their attitude towards GM crops had become more positive.

For some, this was because of a greater awareness of the global food security challenge and helping the UK become less reliant on imports. For others, more extreme weather and rising input costs meant a means of growing yields was an important advance. And for a few, it was just about remaining competitive with the rest of the world.

However, 17% said their attitudes had become more negative. This was largely due to a lack of trust in the control that a few large corporates had over the technology. For others, it was due to some of the negative stories from farmers in the US and for some it was because of the rising cost of non-GM livestock feed.

For the detractors, health ­concerns remained an issue, but they were not nearly as significant as they were back in the days when headlines spoke of “Frankenstein foods”. In fact, 64% thought GM foods were “probably” or “definitely” safe to eat, while 16% disagreed.

Eat what you reap?

The reasons for choosing conventional and organic were in tune with well-rehearsed selling points (for example, price, environmental benefits, taste and health).

The reasons for choosing GM ranged from a need for more sustainably produced food and a need to reduce pesticide use through to an acceptance that lots of our food already contains traces of GM.

The labelling of food as “GM” has been the subject of much debate in countries such as the USA, but 70% of farmers believed that food products containing GM should be labelled as such.

It is clear there are some pros and cons to the production of GM crops, but who is really going to benefit from the uptake of this technology?

Despite perceived gains in yield, reduced input costs and less environmental impact, farmers placed themselves at the bottom of the pile (see table 4) of who would gain from the use of the technology.

Seed and agrichemical companies were seen to gain the most, followed by research bodies and livestock breeding companies.

Consumers ranked slightly higher than farmers, but the ranking nonetheless raises the question of in whose interest is the use of GM technology?

A significant concern from farmers was the corporate control of the technology, so what role should government play?

DEFRA secretary Owen Paterson’s view is that UK farmers are losing out from Europe’s anti-GM stance.

We asked our readers whether they agreed with him and 63% thought it was right for government to be promoting the adoption of GM, while 34% disagreed.

However, when asked to rank priorities for government food policy, farmers put reducing waste across the food supply chain as the number one priority, followed by investing in educating farmers in developing countries on best practice agronomy and farm management.

Investment in the development of GM crop varieties was ranked last (see table 3).

A majority of farmers were willing to grow GM crops and a large part of the reasoning behind this was the need to see progress in UK agriculture and embrace available science and technology.

However, there remain significant concerns about how the technology is applied, especially the current dominance over the technology by one large corporate.

There seems to remain a mistrust about the power dynamic associated with the technology and farmers were clearly concerned that there isn’t a market with the British public.

The results revealed a large gap between what farmers were willing to plant and what they would choose to eat.

Some 61% would grow a GM crop, 63% think government is right to promote the technology, 64% think GM food products are safe to eat, yet only 15% would choose to buy a GM food product in the shop.

There remain many questions to be answered on this subject and the fact that many farmers still hold concerns over the use of GM technology means more research and education needs to be done. But in the light of more variable and pressurised growing conditions, it seems farmers are warming up to the idea that GM crops are a technology they want in their toolbox.

Other survey questions and responses:

What should be the priority for government food policy?


Who will benefit the most?

Have your say on our forum on GM

OPINION: Where do you stand on GM?