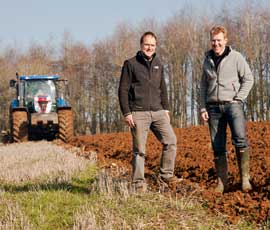 Sustainability is a buzzword that agriculture has long had to bear. We all know it’s important – but could you really sum up what it means? In a new series of articles, Farmers Weekly has teamed up with TV presenter and farmer Adam Henson to find out exactly what “sustainability” looks like when it gets mud on its boots

If you’ve heard it once, you’re sure to have heard it a thousand times – or read it or even said it yourself. Farming needs to be “sustainable”. It’s there in cross-compliance rules, on politicians’ lips, and on the packaging of the food we eat.

It’s been there in the calls of environmentalists, politicians and campaigners for decades.

Of course farming needs to be sustainable. Farmers put food on people’s plates and care for the natural environment that produces it. Farming is intrinsic to the fabric of Britain, and many farming families have been in occupation for generations – sometimes centuries. Sustainability is something farming doesn’t need to be reminded of.

The word has acquired a new set of clothes recently, as scientists and farming leaders begin to talk about “sustainable intensification” – the idea that, to feed the billions of mouths in the coming decades, food production needs to expand massively – but within the constraints of environmental responsibility.

Sustainability in farming is something that interests Adam Henson. He’s best known as the face of BBC’s Countryfile programme, which regularly attracts more than 6.5m Sunday evening viewers. Others may also know him as the man behind the successful Cotswold Farm Park visitor attraction. But few realise that he’s also a commercial farmer who, with his business partner Duncan Andrews, is cropping more than 3500 acres.

“Everyone’s concept of sustainability varies and it’s often a topic of disagreement. A farmer in Africa will obviously have a very different idea of sustainability to a farmer in, say, Wales. As far as most of us are concerned, we’re managed by EU law and trade on a world scale – so implementing a sustainable farming system on individual holdings that everyone agrees with is always going to be fraught with difficulties.

“I first heard someone talk about sustainability at a farming conference years ago. Lots of people were and still are very cynical about it, but for us it’s proved one of the most important considerations in our business.

“For me, sustainability is intrinsic to all aspects of our business. It’s all about ensuring the continuation and well-being of everything we do, our technical efficiency, our environmental obligations and our relationships with the people we interact with.”

While most people hear the word sustainability and immediately think of restrictive environmental practices and difficulties in intensive farming systems, Adam believes it is worth exploring every aspect of a modern farming business. “In a practical arable context, it’s quite easy to try say what sustainability means,” he says.

“Keeping a business sustainable in that context suggests investing in up-to-date technology and operations. That way we can use fuel more efficiently, and resources like nitrogen and phosphate.”

Adam and his business partner Duncan Andrews reorganised their farming operation 12 years ago, selling most of their own machinery. In a joint-venture partnership with nearby farmers Robert and Hamish Campbell last year, they formed the Cotswold Farm Partnership, a limited liability partnership which contract-farms Bemborough and Tinkers land as well as the Campbells’ 1350 acres. With them, Adam and Duncan invested in a new set of tackle including a Yara N-sensor, SOYL nutrient management systems and variable-rate fertiliser spreading. The joint venture owns its own kit and makes a monthly charge to the parent businesses – cutting their power and machinery costs, like depreciation, significantly.

Efficient arable operations also have positive implications for environmental aspects of sustainability. “We’re now five years into a 10-year Cotswold Environmentally Sensitive Area agreement, and there is significant biodiversity here that we want to protect – for instance, we have some rare plants and insects here like Cotswold Pennycress and the Duke of Burgundy butterfly.”

To that end, Adam and Duncan have sought to embrace integrated farm management principles as part of an efficient arable system. “That means the obvious things like not chucking fertiliser into the hedges, and using chemicals at lower rates instead of blanket applications. But we’ve also been thinking carefully about what we put where – and that means observing insect thresholds to target crop treatments better.”

It goes without saying that the Cotswold Farm Park forms the major part of Adam and Duncan’s diversified business. Established by Adam’s father Joe and his business partner John Neave, the Cotswold Farm Park quickly became one of the most successful of its kind. Now celebrating its 40th anniversary, it attracts more than 70,000 visitors each year and has brought more than 2.5m people into hands on contact with farming, showcasing 50 different breeds and seven species.

“We’re carrying on Dad’s work and passion and showing it to the general public – and that’s really satisfying.”

Joe Henson began to acquire examples of livestock breeds that were becoming less mainstream in the late 1960s. The post-war intensification of farming to feed a hungry, near-bankrupt nation saw the introduction of black-and-white dairy cows and Continental beef breeds. Older breeds that didn’t suit these systems began to fall from favour. “For instance, Gloucester cattle, which traditionally had a threefold purpose – meat, milk and draught power – began to slip away.”

Despite local opposition – including the belief that “farms were factories, not visitor attractions” and that “the Cotswolds won’t get tourists”, the farm park was an early success. A further boost came when Joe and John acquired the rare breeds collection from Whipsnade Zoo. As more traditional animals, like the Gloucester Old Spot pig, were gradually left behind, Joe was approached to join a working party of farmers interested in preserving some of these breeds. It was this group that became the Rare Breeds Survival Trust, with Joe as its founder chairman.

“It’s not just sustainable in that sense – the farm park has been a really important part of our business, and one that we’ve relied on, when farm incomes have been lowest,” says Adam.

It seems one doesn’t have to look hard for examples of what sustainability really means.

* Throughout this spring, Farmers Weekly will be looking at different aspects of Adam and Duncan’s business, exploring the concept of sustainability in terms of people, soils, machines and livestock. But we’d like to hear your ideas too – tell us what farming’s perennial buzzword means to you at www.fwi.co.uk/sustainability

* The business includes contract management and contract farming on a further 800 acres.

* Arable operations are carried out in a joint venture partnership with Cotswold farmers and rapeseed oil producers Robert and Hamish Campbell www.r-oil.co.uk