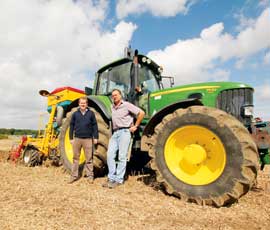 Adopting a no-till establishment system is not without its pitfalls in the early stages, but the long-term gains are believed to have massive potential.

“The decision to go down the zero-tillage route is predominantly driven by sustainability,” says Mr Randall, who runs the family farm near Maidenhead with his father Alan.

“We are on relatively light land, with low organic matter and poor moisture retention. As we suffer from increasing extremes in weather, we hope that being more sympathetic to the soil will enhance its characteristics.”

Coming up to the first anniversary of the Randalls’ switch to direct drilling, they hope the move will help to retain the organic matter in the soil and leave the land with an improved soil structure.

“We were also concerned about the current chemistry available for grassweed control, particularly blackgrass,” he explains.

“Although we don’t have a huge blackgrass problem, we would like to keep it that way and all the research I have done points towards leaving seeds on the surface as the best means of managing the weed seed bank.”

Switching from a system that is a known entity and works well to one that has numerous risks sounds like an agronomist’s nightmare.

“I had my reservations about moving over to direct drilling and I’m not quite convinced how it will go,” says Jock Willmott, the Strutt and Parker agronomist who oversees crop care for the Randalls.

“We are aware there will be a yield penalty while settling in, but we will be working hard to counteract that as best we can.”

In this first year, establishment has been exceptional, to the extent that the farm was confronted with some very forward crops in the early winter.

“They really took off in the mild conditions,” says Mr Willmott. “The wider rows were really noticeable though and it was a concern as to how that would affect weed management. We are trying to do as much out-of-crop control with glyphosate as we can, which is absolutely vital in the non-inversion scenario.

“We are not starting with a clean sheet, with pockets of blackgrass, brome and ryegrass all present around the farm, but not to a horrendous extent. The challenge is to keep it that way, particularly with brome moving in off headlands and no longer having the option of burying it with the plough.”

Patience will be key in the autumn, delaying drilling as late as possible to ensure there is a good flush of weeds and the 7.5m Claydon stubble rake can be used to encourage germination.

“Striking a balance between leaving the seed-bed long enough to get a decent chit, but not so late that seed coverage is poor in damper conditions, is a difficult thing.

“Stale seed-beds didn’t produce the flush we would have wanted last year due to the dry autumn, but I don’t envisage the same problem this year.”

Mr Willmott points out that the recent incorporation of a spring break crop – either oats or linseed – to what was a wheat and rape rotation has significantly increased his confidence in keeping on top of the weeds.

“It will give us another crack with the glyphosate,” adds Mr Willmott.

“Looking back on the first year, we haven’t seen any negative effect from the change in system with regards to weed control.

“But we need to keep on top of it, as Mr Randall’s long-term strategy of improving the soil will be compromised if we have to plough for brome in five years’ time.”

Mr Randall will be assessing his soils for organic matter improvement and digging profile pits to see how the soil structure changes.

“We are hoping to see an improvement in nitrogen use, with better soil characteristics and structure, but that will be difficult to quantify in the early stages,” he says.

“Regarding compaction, this year we have already seen the benefit of not using deeper cultivations. Where the Sumo Trio had been used the previous year, the combine has left much deeper marks compared with ground where we tried the Claydon two years ago and followed it again last autumn,” he says.

Although the direct drilling system would aim not to use any sub-soil cultivation, Mr Willmott points out that where compaction is affecting crop performance there would be a case for it.

“It’s a case of getting the spade out and looking at where the compaction is and at what depth,” he adds.

The issue of compaction is something that must be managed, and although Mr Randall won’t be investing in a complete controlled traffic system to complement the direct drilling, he is restricting where machines travel.

“We can’t justify CTF on our acreage. It’s a big investment and to get the full benefits we would have to double our drill width.

“RTK systems are currently expensive, but hopefully it will come down in price and it may be something we consider in the future. We did hire RTK to put the tramlines in, so they are in the same place each time,” he says.

All grain trailers travel down those tramlines where possible and Mr Randall’s rolls and muck spreaders are running at 12m between 24m tramlines to ensure he knows exactly where the compaction, if any, is located.