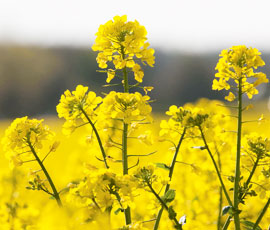 The French government has banned the use of a pesticide linked to the decline of bees that is widely used to treat oilseed rape crops.

The French Ministry of Agriculture withdrew Cruiser OSR, a neonicotinoid insecticide that contains the active ingredient thiamethoxam, from use on oilseed rape in France.

Cruiser OSR is a seed treatment by Swiss agrichemical company Syngenta, which describes it as “the most effective and convenient way of controlling damaging pests in oilseed rape”.

The ban will take effect from the start of the next oilseed rape sowing campaign in the late summer. However, Luke Gibbs, head of public affairs at Syngenta UK, said British growers would not be affected.

“The restriction on the use of neonicotinoid seed treatments in France will not impact the registration of Cruiser in the UK, which will be available for use as normal in the coming planting season,” he confirmed.

The decision to ban Cruiser in France follows two studies earlier this year, in the UK and France, which found evidence that high doses of neonicotinoids contained chemicals that disorientate bees and prevent them from finding their hives.

Bees are essential pollinators of crops and a recent Friends of the Earth study showed they are worth an estimated £510m a year to the UK economy.

Studies show that bee numbers are declining worldwide and conservationists claim increased pesticide use is a major factor.

However, Mr Gibbs said Syngenta remained convinced that the decision to ban Cruiser in France was being made without the appropriate scientific evidence.

Mr Gibbs said the experimental study on neonictinoids in France was flawed because bees were subjected to far higher doses of the chemical than they would ever encounter in the field as the pesticide is used at far lower doses – and only as a seed treatment.

“Seed treatments are the most effective and environmentally responsible method to protect crops from seed damage – significantly reducing the risk of non-target species. Cruiser protects 30% of crop yields and replaces foliar application sprays.”

Syngenta has estimated that the decision will cost French farmers around €200m  (£161m) per season through lost yield and crop protection.

France’s Ministry of Agriculture had also been pushing for an EU-wide ban on neonicotinoids with the European Commission and the European Food Safety Agency (EFSA).

However, Farmers Weekly understands that the commission will not be proposing a member state restriction of neonicotinoids at this time and will wait until EFSA reports its own assessment later this year.

DEFRA said it was monitoring the situation, but confirmed that so far the Food and Environment Research Agency’s National Bee Unit had found no evidence that linked neonicotinoids directly to any case of bee mortality.