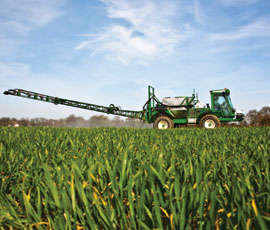 Yellow and brown rust is threatening to be a serious problem as in 2006/07, agronomists believe.

It means the timing and effectiveness of the T0 treatment will be vital to protect crops going into the spring.

“We have had very few frosts this winter until recently, which has allowed disease levels to build,” says Colin Lloyd, research and development manager for Agrii at Throws Farm, Essex. “If the spring conditions are right for brown and yellow rust it could be serious.”

James Southgate, Agrii research and development project manager at Throws Farm, believes it could be even worse than 2006/07. “We didn’t have the same level of brown and yellow rust inoculum that there is now.

“In 2006/07 it appeared due to conditions in the spring, but this year we already have high levels sitting in the crop,” he explains.

With 32% of the UK wheat area in 2012 having a Recommended List score of five or less for yellow rust, and 70% of the area scoring five or less for brown rust, there could be significant issues with infection.

“We are seeing new races of both brown and yellow rusts, with varieties such as Warrior and Stigg, which have strong resistance to the disease, breaking down in some situations,” says Mr Lloyd.

“However, the fact that nearly 10% of the wheat area for 2012 is Oakley, which has poor scores for both rusts, proves it can be managed,” he adds.


Timings throughout the fungicide programme and the quality of the spraying is vital to ensure yield is protected.

“We have bigger, lusher canopies this year, so spray penetration will be key,” says Mr Lloyd. “Forward speed when spraying should be considered, with slower speeds ensuring the target is hit.”

When timings are stretched there can be increased disease presence and yield penalty, says Mr Southgate.

“In trials we have shown that if a T1 is earlier and T2 is later, increasing the window in between resulted in 10% higher infection of yellow rust and, subsequently, 0.38t/ha less yield.”

“Although it is not always possible to spray on a precise date due to conditions, growers should identify high-risk areas and ensure that timings are as close as possible where there could be a problem,” adds Mr Southgate.

The addition of a T0 application into programmes can also give additional yield benefits, especially when T1 applications are delayed.

“If we start the programme in the right way it gives us extra insurance against disease, especially if the weather results in following sprays being delayed,” says Mr Southgate. “A T0 gave us an extra 0.48t/ha in yield, even in a low disease year.

“We are getting to the stage where T0 should be part of the programme wherever you are, regardless of disease levels,” he says.

“I would work on the T0 timing of 15 March, give or take a few days, based on a triazole with a mildewcide, if required,” says Mr Lloyd. “Growers who need activity on septoria can add chlorothalonil too.”