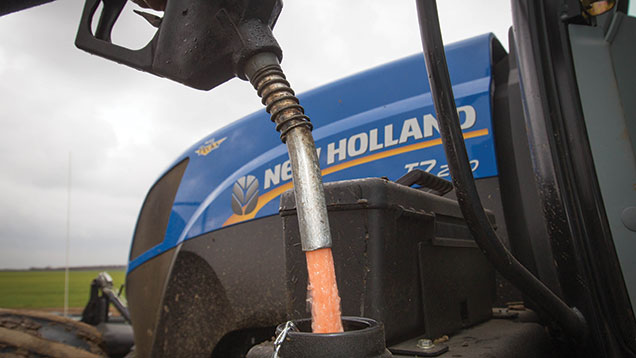 Oil prices have plummeted in recent months and farmers can take advantage of this to reduce their arable input costs in the year ahead.

Farmers carrying out autumn cultivations will not have benefited, and many producers will have already locked into spring fertiliser prices – but there are considerable savings to be had for the year ahead.

However, add in the effects of fluctuating exchange rates, refinery costs and taxes, and the influence on domestic prices is not quite so straightforward, says Gary Markham, director of farms and estates at Churchgate Accountants.

“Our benchmarking survey of 90,000 acres showed the top 25% of arable clients spent an average of £31/acre on fuel last year – so a 25% cut in fuel price equates to a saving of nearly £8/acre.”
Gary Markham, Churchgate Accountants

Nevertheless, red diesel prices have dropped from about 62p/litre last year to about 45p/litre now.

“The word is that we’ve got these prices for the next couple of years, but politically it is such a volatile situation that quite a few people are stocking up on fuel now.”

Assuming farmers have the cashflow and storage, it could be sensible to lock in at current prices, says Mr Markham. “If you’re part of a buying group such as Elite Farmers, it may be possible to fix future fuel prices as well.”

Fertiliser prices have yet to reflect lower costs of production, as many manufacturers are still selling old stocks. “Urea is currently pegged at about £290/t, compared with £250/t in April last year,” says Mr Markham. “But if it drops as expected, to £230-240/t in May or June, that will be a huge saving.”

For larger farmers, or those collaborating through machinery rings or buying groups, buying in bulk and storing fertiliser is increasingly attractive, considering the volatile market, he adds.

“I’ve got a couple of clients who are jointly putting up new buildings to store fertiliser, so they can buy strategically rather than when they need it. When you’re working together across a large acreage you really can benefit from this type of investment.”

Given the volatility in fertiliser prices, it is vital to monitor the markets and lock in when a buying opportunity arises, says Charlie Ireland, partner at Strutt & Parker. “Last year, urea prices dipped for a short period, and two years ago they dropped by £30-40/t just before Christmas.”

Gas prices tend to influence the cost of fertiliser more than oil values – but global supply and demand for fertiliser is also critical, he adds.

“Supply and demand for urea is tight, which is putting upward pressure on prices. But manufacturers will have to take account of falling oil markets, so I wouldn’t rush out and buy now.”

Given that most manufacturers prefer growers to spread the timing of sales, they usually offer incentives for buying early, says Mr Ireland. “There might be an opportunity to buy in the spring.” However, for anyone who has yet to lock into fertiliser for the current crop, time is of the essence.

“Deliveries are becoming more of a problem, so you need to hurry up if you haven’t already bought your top dressing.”

Electricity costs should also fall this year, he adds. “We’re seeing energy wholesalers cut their prices for between February and April, so they are factoring in an expectation that energy prices will stay low into the summer. The experts are saying oil prices will stay low for a couple of years, so I wouldn’t rush out to buy fuel – but that said, they didn’t see this drop coming in the first place.”

Nigel Collen, business development manager at Mole Valley Farmers’ Mole Fuel Solutions, agrees that the general consensus is that oil prices will remain low throughout 2015 and into 2016.

“Prices have fallen quite dramatically and my personal view is that they are now leveling out. There is an oversupply of fuel and demand isn’t as strong as it was, so I don’t see values rising dramatically – unless of course there is a major geopolitical influence, which can’t be predicted.”

Although there is no urgency to lock into today’s prices, if they do start to rise then farmers should consider locking in, says Mr Collen.

The same is true of electricity costs – although growers should be aware of termination clauses. “Often you are locked into a contract, so make sure you give notice on your due date, so you are then free to renegotiate with existing or other suppliers.”