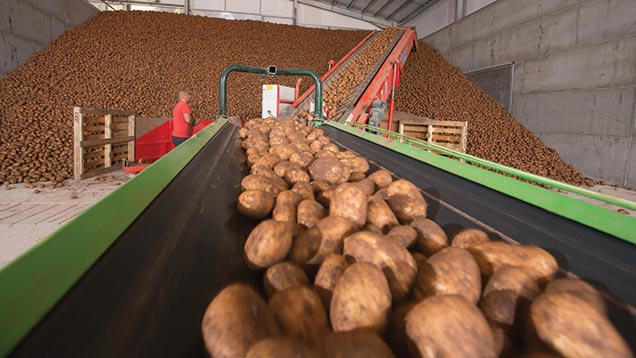 Potato growing costs are set to come under greater scrutiny after producers endured another difficult year, with ex-farm average prices the lowest for at least five years, undermining returns across the sector.

And with the outlook for markets remaining depressed for the coming season, farmers are understandably considering how to slim down production costs and improve their margins.

“Just because you have a potato store doesn’t mean you have to fill it with potatoes.”
Adrian Cunnington, head of Sutton Bridge Crop Storage Research

According to Allan Wilkinson, head of agriculture at HSBC, the difference between the most and least efficient potato producers’ costs of production could be as great as £100/t. So, for some, there is plenty of room to improve margins.

“We have an oversupply of potatoes, resulting in low prices – and if you’ve got a higher cost base than others, it’s more than a bit of a challenge,” he says.

“If you’re serious about potatoes you’ve got to look carefully at the different enterprises to ensure they remain viable. There seems to be a gentle decline in consumption of fresh potatoes in the UK: You’ve got to supply what the processor wants, and grow what suits your farm.”

Although the difference in production costs between the top and bottom quartile of growers is huge, tackling profitability is not just about cutting costs, warns Mr Wilkinson.

To maximise yields and minimise costs, producers should only grow the most suitable varieties on their best available land, he explains.

“If you are renting land you have to consider the costs and opportunities it comes with, including transport costs. In the future, UK growers are going to have to think like global exporters because we are increasingly exposed to that market.”

The Potato Council is forecasting a 0.8% decrease in growers’ average production costs this year, with marginally higher fixed costs being offset by lower variable-input costs.
Comparable data compiled by Andersons and Bidwells puts total production costs among the top 25% of growers for the processing market at £6,108/ha – or £107/t based on a yield of 46t/ha.

Of that, variable costs comprise £1,825/ha, with labour, machinery and rent making up the majority of the £4,283/ha fixed costs.

While variable costs are virtually non-negotiable, fixed costs are where the big differences arise, says Mr Wilkinson. “You need to really use your machinery efficiently; pool resources with other people – maybe even share management expertise. Whatever you do, it has to be viable.”

David Hoyles, chairman of Lincolnshire co-operative Nene Potatoes, says the best way to tackle production costs is to benchmark against other growers.

“We have 28 members growing 100,000t of potatoes, and benchmark both with the Potato Council and within the group,” he says. “Once you have accurate figures to work with you can make much more informed business decisions with regard to forward prices and contracts.”

Mr Hoyles recommends using the farm’s audited end-of-year accounts when allocating costs to different enterprises, to ensure nothing slips through the net. “If you try to guess your costs, you often underestimate them,” he says.

“Little jobs lsuch as maintenance often go unrecorded, but you have to attribute those costs somewhere in the business.”

Other common areas where farmers underestimate their costs include family labour and an opportunity cost for the land, says Mr Hoyles. “Even if you own the land, you need to include a rent figure, as you could just be letting it out.”

As a group, Nene Potatoes’ members have slightly lower costs of production than the industry average, as many don’t use irrigation and have owned their land for generations, he adds. “But where our costs are higher are depreciation and storage, as many of our growers have invested in storage in recent years.”

Variable costs are extremely comparable, regardless of enterprise size. “Some growers have 30ha and some have 300ha, and yet we don’t see any economies of scale with variable costs,” says Mr Hoyle.

“Fixed costs are where we do see massive differences; land rent, finance, deprecation, labour and so on. Some growers have invested in renewable energy, so their electricity costs are far lower.”

But it’s not just about growing costs. By benchmarking against others, Mr Hoyles realised his yields were lower than other farmers on similar land. “We have light soils, and with lower yields my costs of production were higher per tonne,” he says.

“To address that, I’ve recently got permission for an abstraction license and planning permission for a reservoir. By irrigating I should be able to increase yields and get more consistent quality.”

He has also bought an oversize module and box filler so he can burn off the crop later, boosting yields, while still being able to handle oversize potatoes. “You don’t need to get too concerned about overall costs of production – it’s what you do with that information that counts.”

Storage is one critical area where savings can be made, despite lower energy prices this year, according to Adrian Cunnington, head of Sutton Bridge Crop Storage Research.

“Our data suggests there is a 300% difference between the best and the worst stores,” he says. “It gets quite difficult to compete if your costs are three times that of your neighbours’.”

Worryingly, most producers don’t actually know what their storage is costing them, so the first thing to do is install an independent energy meter into each store and check you’re on the cheapest energy tariff, says Mr Cunnington.

“You should be able to work out a cost/tonne for your storage, and then benchmark against others. If you identify a problem store you can then take steps to discover why.”

Common problems include poor insulation, air leakage, inaccurate controls and inefficient refrigeration technology. “Automatic controls generally work quite well, but if you have manual controls it is easy to leave fans running when conditions aren’t ideal,” he explains.

“In most ambient stores your ventilation system should be running for 15-20% of the time. If it is exceeding that there could be a problem with a heat source or air circulation. You need to look at how well the store is loaded, as if there are barriers to air flow it will increase your costs.”

Having calculated their own costs, producers should then assess the viability of potato production, he adds. “The overriding message in the current climate is not to grow and store crops that you haven’t got a viable market for. Just because you have a potato store doesn’t mean you have to fill it with potatoes.”