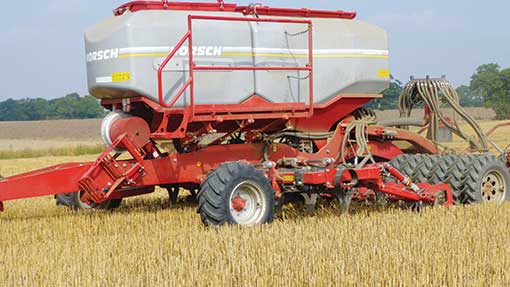 Strategic placement of fertiliser to give crops an early nutrient boost is a key feature of new seeders designed for “strip drilling” of oilseed rape without purpose-built strip cultivators. And they can also be used for sowing cereals.

For OSR, the key feature of the Horsch Focus TD and Väderstad Spirit StripDrill is that cultivation is concentrated where the plants will grow rather than across the full working width, and deep enough to provide the deep fissuring that promotes strong root development and effective drainage.

Unlike strip cultivators, there is no mechanism other than the tines for removing crop residues from the tilled soil. But the manufacturers claim the drills provide the benefits of strip cultivation – such as moisture retention, high output from lower draft load and a firm surface for subsequent operations – from an implement not confined to establishing oilseed rape.

“We’ve put a lot of development work into strip tillage across Europe in the past six years and seen some excellent trial results,” says Stephen Burcham of Horsch UK. “Our experience shows soil type has a lot to do with its success. We want to create a nice, friable seed-bed in a short distance; that’s easily achieved in light to medium soils, but more difficult on heavier land.”

Providing fertiliser in the right place is another key factor, he maintains. “It’s clear the weather at seeding time and the location of fertiliser in the seed-bed is as important as choosing the right fertiliser,” Mr Burcham says. “With the Focus TD, we can place it shallow – 5-10cm – when it’s wet and cold, and root development is likely to be slow, or 20-25cm when conditions are more favourable.”

For late sowing, a combination of the two provides the option to give a quick hit of nutrients from shallow placement and a deeper supply providing further nutrition as the root system develops.

Horsch claims to have made it relatively easy to adapt the drill for sowing grain: a redesigned coulter toolbar allows row spacing changes in a matter of minutes and the tine cultivation frame can be swapped for a 25cm DiscSystem assembly for shallow cultivation.

Väderstad tested its first StripDrill concept in 2011 and it has since been further refined, with many of the improvements resulting from the experience of German strip tillage advocate Nis Lassen.

“My experience is that yields are stabilised at a higher level and over the long-term, increases of 5-10% are realistic,” he says. “For me, the biggest advantage of the technique is the increase in yield stability, which is particularly true under difficult conditions when the weather is too dry or too wet.”

Despite extreme weather, it is possible to establish good stands with optimum root systems, he maintains, while also meeting the differing needs of rape and grain crops in terms of root development.

StripDrill is a front tool for Väderstad’s Spirit tine drill designed to minimise soil disturbance at drilling to conserve moisture, minimise the effects of compaction and ultimately increase yields.

❚ Increased demand for fertiliser placement at drilling has prompted new options from Claydon – the front-mounted 1,500kg hopper and 1,000-litre liquid fertiliser tank for the 4.0m, 4.8m and 6m Hybrid drills; and the 3.0m Claydon Fertiliser Hybrid drill, which features a divided hopper.

“Placing fertiliser at drilling works particularly well with the Claydon system because only the soil immediately around the seeding zone is moved, leaving the rest of the soil undisturbed,” says the firm’s Spencer Claydon.

“It ensures optimum nutrient availability to the young seedling and can reduce costs because fertiliser is only applied where necessary, rather than being applied to the 50% of undisturbed soil between each seed row.”

As with the front hopper option, fertiliser is fed down the back of the leading breaker tine and placed 75-100mm below the seeding zone – although growers who prefer mixing seed and fertiliser can reconfigure the set to feed fertiliser down the seeding tine.