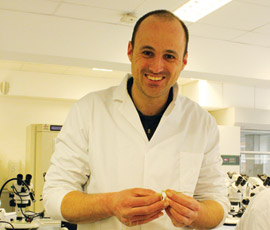 As Farmers Weekly‘s Adam Clarke embarks on his BASIS certificate in crop protection, he finds out who the course is for, and what’s involved.

The BASIS qualification is primarily aimed at arable advisers and agronomists, but there is no reason why growers shouldn’t attempt it.

BASIS managing director, Rob Simpson, explains he is seeing an increasing number of farm managers, both young and old, applying.

BASIS was founded as the British Agrochemicals Standards and Inspection Scheme, but now has a far wider remit in the pesticides industry.

Legislation dictates all those selling and supplying pesticides must have a BASIS certification and the government recommends advisers do as well.

Most independent and distributor agronomists hold the industry’s only recognised competence certificate, along with some farmers, managers and spray operators.

“Once the certificate is gained, you are put on a professional register which ensures that holders maintain their knowledge and skills by collecting continuing development points,” Mr Simpson notes.

Mr Simpson point out that 20 or 30 years ago farmers used to rely on advice from bodies such as ADAS, which came at little to no cost.

Today, the costs of advice and crop inputs are much higher so it is important for growers to have more informed conversations with their advisor or agronomist.

“Although growers won’t necessarily issue their own advice, they want to be more aware of the technical and environmental issues surrounding pesticide use, which can make the agronomist’s job much easier.

“If there is a need to invest more cash on fungicides or herbicides, they are perhaps more likely to be receptive of the extra investment,” he explains.

So what does it involve?

There are no academic requirements to take the course, but it is recommended that students have at least one to two years of industry experience.

BASIS business development manager, Stephen Jacob, points out that although the course is testing competence rather than academia, the standard is still on a par with an honours degree.

“There is classroom work, but the most important part of the course is getting out in the field and immersing yourself in the weed, pest and disease problems facing farmers,” he adds.