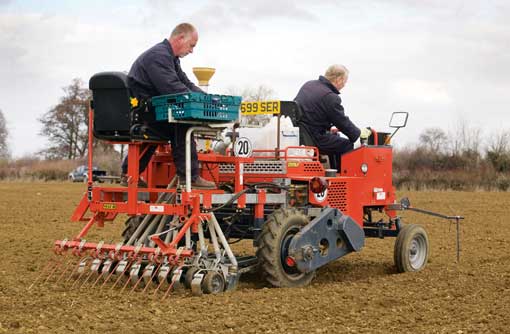 The recent search for a new pathologist has brought home to me just how run-down applied arable science has become in the UK.

A research institute with which I am involved with set out to recruit a new pathologist due to the retirement and whichever lead we followed, we ultimately found out there was seemingly no applied pathologists to be found. Hopefully, we will be found wrong on this one.

The trend started with the cutbacks in agricultural research implemented by the government in the mid 1980s, and has continued ever since as successive governments, keen to keep the spending down, followed suit, unwilling to listen to the voices that told them of the dangers of following such a policy.

If we are ever to translate that vital and much-needed strategic laboratory-based research into meaningful systems and advice on farm then applied scientists are desperately needed.

At a meeting of the All Party Parliamentary Group on Science and Technology in Agriculture, Robert Watson commented that the UK levy boards whose combined R&D budget was the same size as DEFRA, had “not stepped up to the plate on funding translational or applied research”. He obviously forgot that AHDB as it is currently constituted cannot deliver agronomy advice, as they are only allowed to contract out research to a third party.

Continual cutbacks have left the UK applied research institutes battered and demoralised and it is no wonder that recent graduates go abroad.

In the past 30 years, 17 research institutes have become two. There just aren’t the positions available for everyone to follow their vocation in the UK.

Even more alarming is the age profile of our applied research specialists. For instance, in soil science we only have four specialists under the age of 40, while the 41-60 age group shows 30 specialists, and similarly for water use, there is only one specialist below the age of 40, whereas there are nine aged 41-60. This profile is depressingly similar in all of the major disciplines.

The great worry is that in 10 years’ time, those specialists at the higher end of the age profile will have retired and take with them many years of accumulated knowledge, while there are insufficient new entrants. When we really need to turn on the taps of food production, we may have a problem without the practical advice on how to implement this.

Prof Watson’s announcement that a process was under way to examine the status of UK agricultural research and development is all to the good. The aim of the survey is to see whether or not the UK was disadvantaged to other countries such as France, USA and Germany. In terms of percentage of GDP spent on UK agricultural research, we are most definitely at a disadvantage. The UK spends just 0.01% per annum compared with 0.02% for the USA, 0.06% in Australia and France at 0.05%.

A recent initiative by NIAB-TAG has seen them secure £6.8m to fund the transfer of research findings through to commercial markets. Key to this was a £2.7m grant from the European Regional Development Fund with additional match funding coming from industry and academia. But how much better this would have been with a long-term plan by either the UK government, or EU to help fund the dissemination of information rather than the ad hoc and hit-and-miss approach of having to apply to a Regional Development Fund for assistance.

It is about time we woke up to the dangers that currently exist in our applied research base. If EU commissioner Ciolos is to retain any EU modulated monies, then I can think of no better use for it than to help fund a long-term strategy and network of applied research centres across Europe. This should put some degree of long-term stability into applied R&D and give us what we need to become once again a key player in the world of applied research.

It is only by long-term funding that we can secure the future of the next generation of researchers and give them the confidence to continue their academic studies. If we are genuinely interested in food production, we need to change our thinking on applied research.

• Mark Leggott is the vice-chairman of the NFU Combinable Crops Board and chairman of PGRO Research Station.

Do you agree with Mark that there is a lack of applied arable research in the UK. Tell us what what you think on our Crop Comments forum