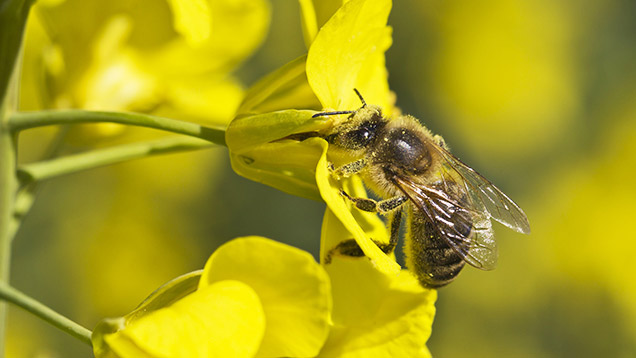 An emergency request for growers to use neonicotinoid seed treatments on oilseed rape is unlikely to be considered by Defra before 7 July, it has emerged.

The request to use neonicotinoids has been made by the NFU, which said it was having to amend its application for farmers to use the chemicals to control cabbage stem flea beetle.

NFU combinable crops board chairman Mike Hambly said the request required the union to demonstrate a need for the authorisation – and also for it to be limited and controlled.

See also: Defra will take the right decision on neonics

Furthermore, the union had to demonstrate to the government’s Chemicals Regulation Directorate that flea beetle could not be contained by any other reasonable measure.

This had been proving quite difficult, Mr Hambly told an NFU council meeting at Stoneleigh Park, Warwickshire, on Tuesday (23 June).

“Negotiations are ongoing,” he said, adding that there would probably have to be “some amendments” to the NFU’s original authorisation request.

Once resubmitted, it was unlikely that the amended application would be considered before a meeting of the Chemicals Regulation Directorate on 7 July.

“We are well aware that time is running out,” said Mr Hambly.

“This is really pushing us into a very, very difficult position with the regulators. There seems to be little understanding of the word ’emergency’ – which is what we said to them last year, as well.”

Mr Hambly said the NFU was well aware of the oilseed rape losses growers had suffered during the current season without neonicotinoids.

Unless authorisation was granted, more growers would abandon rape as a crop.

Asked why the NFU had not prepared and submitted its emergency authorisation request earlier, Mr Hambly said the union had been gathering evidence to support its application.

This is the first season that oilseed rape has been grown since the European Union banned neonicotinoid seed treatments over fears that the chemicals damage bee populations.

With oilseed rape grown without neonicotinoids yet to be harvested, the final impact of the absence of chemicals on the crop is yet to be seen.

Regulators were pressing the union “very hard” to back up and substantiate the need for growers to use neonicotinoid seed treatments, said Mr Hambly.

“The other thing that we have to work on is going to be the impact of turnip yellows virus on the final yield that we get.

We already have reports from agronomists highlighting higher levels of turnip yellows virus but until you’ve had harvest, we can’t really quantify that.”

The NFU has already met agrochemical manufacturer Syngenta to discuss the practicalities of making neonicotinoid treated seed available should authorisation be granted.

The meeting took place at during the Cereals event on 10-11 June. At the time, it was felt that a decision by Defra on the authorisation would be needed by the end of June.