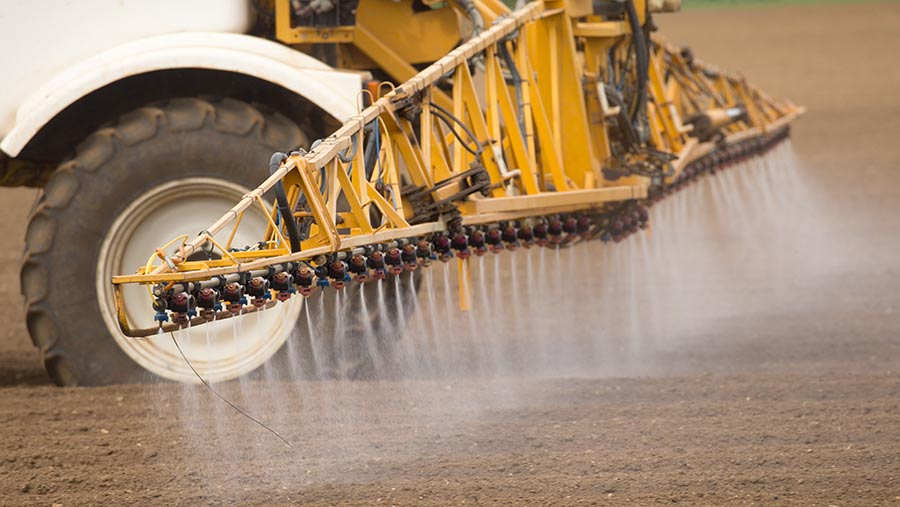 Good levels of early weed control can still be achieved in potato crops despite the loss of a key early-season herbicide, by picking the right mix of alternatives.

Linuron, which has been a significant building block of potato weed control programmes for more than 25 years, was withdrawn from sale last year, with its on-farm use-up period coming to an end on 3 June 2018.

Without it, growers have to consider other ways of getting the same results from their pre-emergence weed control programmes, something they had plenty of warning about, agronomists say.

“The writing has been on the wall for a while,” says Kevin Knight, an agronomist with Zantra in Kent.

“Ever since the rate was reduced seven years ago, we knew linuron was likely to disappear sooner rather than later.”

Trials work done to assess the replacements and their compatibilities shows that far from being left high and dry, growers can still get good results with the right combination of other products.

“There is life after linuron, but the trade-off is that it comes at a cost,” Mr Knight adds.

“A number of the alternatives have a heftier price tag – in some cases it will be significantly more for a programme with comparable performance.”

When considering their use, the challenge is making sure that safe levels of the remaining active ingredients are being targeted at the expected weed spectrum, he advises.

“Linuron was always used in mixes and it is still fair to say that three-way mixes will provide the broadest spectrum of weed control. Of course, weed spectrum, soil type and variety have to be accounted for – there won’t be a standard programme for all situations.”

Mr Knight highlights the active ingredient metobromuron, which has performed well in pre-emergence mixes since it arrived on the scene three years ago, having been resurrected by Belchim.

“We’ve seen very good results with it, but it does need a residual tank-mix partner,” he says.

“In particular, when put in a mix with prosulfocarb, it has done everything that was asked of it. That combination is also a very safe mix.”

For those who don’t want to pay extra, he points out that there is a budget treatment mix option, comprising 3 litres/ha of pendimethalin, 2-3 litres/ha of prosulfocarb and up to 250g/ha of clomazone.

“If the variety and weed spectrum allows – so no chickweed or shepherd’s purse – there’s also the option of replacing the clomazone with Shotput [metribuzin] to further reduce the cost.”

This then makes the follow-up with rimsulfuron a bit less painful on the purse, he says. “Despite best intentions, the residuals often need help to tidy up cleavers, groundsel, mayweed and grassweeds.”

He also recommends using an adjuvant designed for residual herbicides with the pre-emergence treatment, so that the actives are held in the soil and their efficacy is prolonged.

Lancashire-based agronomist John Ball of Agrovista points out that metobromuron is not a like-for-like replacement for linuron, but it is capable of filling the hole left by the older product’s withdrawal.

“It doesn’t have as much contact action as linuron, but offers more residual activity and comes with no aquatic buffer zone. It is also dose-responsive, but experience has shown it’s not worth dropping the rate below 2.5 litres/ha.”

At lower rates, you start running into problems with weeds such as groundsel and knotgrass, he warns. 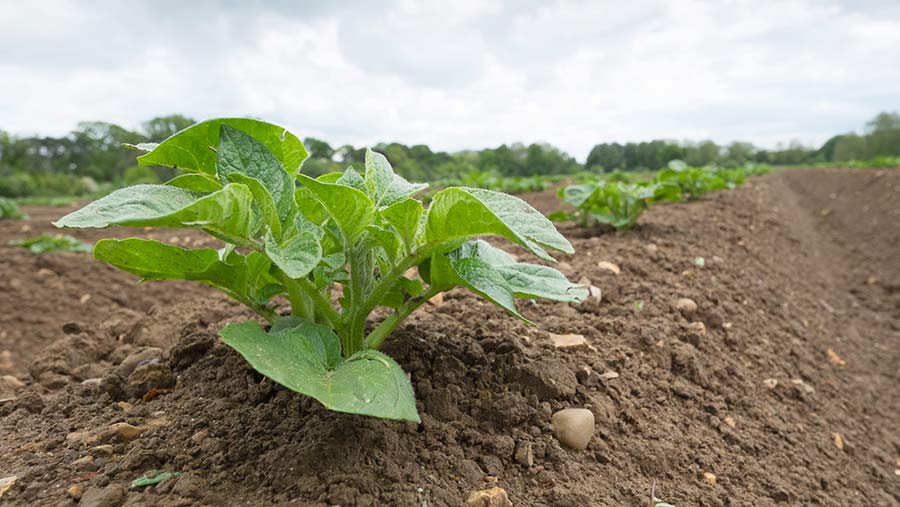 “Given that it’s going to cost you more this year, you need the pre-emergence treatment to work very hard for you. So use it at 2.5-3litres/ha.”

He has also had very good results with a metobromuron/prosulfocarb mix and has included metribuzin where variety choice has allowed.

“The key is to get the residuals working well, so that you are not reliant on contact action later on. In last year’s dry spring, we found the metobromuron was activated once moisture arrived.”

In Scotland, Andrew Sprunt of Agrii is of much the same opinion, pointing out that the most direct replacement for linuron is metobromuron.

“It is very mobile in the soil and it can be used as a partner to other herbicides,” he says.“Of course, it is considerably more expensive.”

He has found that using metobromuron with metribuzin does a good job, covering a whole range of weeds and working well in dry conditions.

“It’s a good foundation. It allows you to control fat hen, redshank and annual meadowgrass, which can be problematic in this part of Scotland. Where there are varieties that prevent the use of metribuzin, it’s a good mixer with prosulfocarb and pendimethalin too.”

While much will depend on the farm and the soil type, there are strengths and weaknesses with the different programmes and some will struggle in dry conditions, he warns.

“Fortunately, metobromuron is more mobile in the soil than some – it also comes with no varietal or soil type restrictions, so it offers flexibility.”

He believes the extra £25-£35/ha is nothing compared with the total production costs for the potato crop.

“If you have to use a post-emergence treatment of Titus, it wipes out the saving you would have had anyway.

“It is better to achieve the required weed control at the pre-emergence stage and Praxim helps greatly with this, in a mix.”

Rumours that another mainstay, diquat, will soon be following linuron into the history books mean other products must be assessed and compared, to see where they might fit.

All three agronomists highlight Gozai (pyraflufen-ethyl) and Shark (carfentrazone) as possible replacements, being as good as diquat for broad-leaved weed control.

“Gozai is slightly better on some weeds,” says John Ball. “On its own, it has done well, with the exception of controlling cranesbill and fumitory.”

“There’s still time to look at your pre-emergence programme and find ways of filling the gaps that Gozai would leave, he points out. 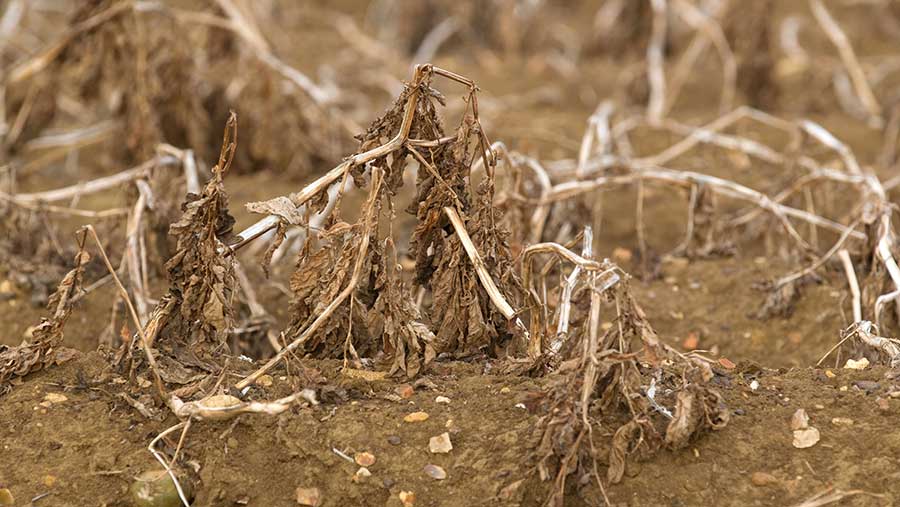 “It’s worth planning ahead by understanding what your weed challenges are.

“Matching products to known issues and having a fallback position is important – the linuron situation has taught us that.”

Losing diquat would give challenges for both weed control and burning off, stresses Andrew Sprunt.

“At this stage, we don’t know what is going to happen. It may not be removed completely, but its use could be restricted.”

He agrees that Gozai has looked promising, but highlights annual meadowgrass as a gap that would need plugging.

“It’s a contact herbicide that has to be used on emerged weeds. Residual partner products will still play an important role in controlling annual meadowgrass.”

Diquat’s withdrawal at the desiccation timing would be a bigger loss, he believes.

“That would be a much steeper learning curve, as neither Shark nor Gozai can burn the foliage down as quickly and effectively as diquat does.”

Two tank mixes stood out in the herbicide trial conducted on a sandy soil type at the Elveden Spot farm East site, but both cost more than the standard treatment.

They were compared with the standard treatment of 1.35 litres/ha of linuron, with 2.2 litres/ha of Stomp Aqua and 200g/ha Shotput, which cost just £34/ha.