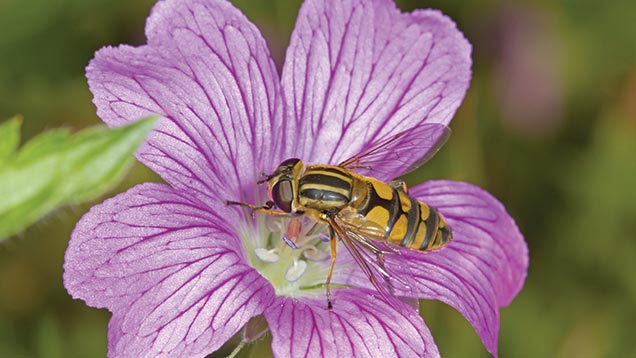 Creating farmland habitats for bees is a matter of putting the right measures in the right places, as well as maximising what is already available on the farm.

Growers who follow expert advice to ensure that nesting sites are within foraging range of food will give bees all the provision they need from March to September, when they are active.

Just five 300m circles, spaced equidistant from each other, will supply enough pollinator habitat for 100ha of farmland, work done at the Centre for Ecology and Hydrology (CEH) has shown.

See also: Part 1 – How to understand a bee’s needs when establishing margins

As previous work established that solitary bees have a foraging distance of 300m, imagining each circle with a nest in the middle of it gives them a range of 20ha, explains Marek Nowakowski of the Wildlife Farming Company.

“It is a crude way of looking at how much you need, but the message behind it is to spread the habitat out. That way you will get good coverage.”

All habitats should have a proven delivery pedigree, he believes. “We now know a great deal about practical habitat creation. We also know that the better the habitat, the greater the wildlife response.”

Simply taking land out of production – such as the situation that developed with set-aside – will do nothing for wildlife, including insects, he warns. “There is enough evidence and experience to show that it is what you do with the land, rather than the amount you take out, that matters.”

Where habitats are placed in non-cropped areas – out of the way of farming activities – there is no evidence of any impact of neonicotinoids on insects.

“It is interesting that the Hillesden project, which was done at a time when neonicotinoids were still being used and the rotation was 25% oilseed rape, showed a clear increase in many insects,” reports Mr Nowakowski.

Without the science to provide the answers farmers need, many are being forced to use other products – which may not work as well, he warns.

“To my knowledge, there is only one large-scale field trial being conducted to get us the answers we need. Let’s hope we have enough information for when the two-year moratorium ends.”

That is why habitat delivery can be cost-effective, he stresses, as it often uses land that isn’t farmed. “Low-yielding or difficult areas can be more profitable when they are put into paid habitats, providing everything is done to make them work.”

There are two essential habitats – winter bird food and flowers, he says.

Looking specifically at bees, the most common habitat found on farms is tussocky grass, such as cocksfoot, he reveals. “It is cheap and lives forever. It has a useful role because it is good for overwintering bees and provides nesting sites for bumblebees.”

Placed on the south side of a hedge, where it is warmer, tussocky grass will encourage nesting to take place. On the colder north side, it will be used by bees for hibernating.

“Once you have enough tussocky grass around the farm to provide homes for wildlife, you can boost it and add some flowers to it,” advises Mr Nowakowski. “It does put the cost up, but flowers are important for diversity. If you want insect diversity, you must have a range of different flowers.”

“But it will also benefit small mammals, which will nest in it. That in turn brings owls and other wildlife, creating living corridors.”

Where flowers are being added, they should go into the tussocky grass on the south side of the hedge, he adds. “With flower diversity comes habitat stability.”

There is also a need to supply pollen and nectar from March until September, when the bees are active, he says.

“For this, there are two types of flower mix – pollen and nectar or wildflower.”

Pollen and nectar mixes are legume-based, and don’t have any grass in them, he explains. “They contain species such as red clover, knapweed and mallow and will last for three to four years.”

Most have been modified so that they contain less red clover than they used to, he reveals. “When they contained 35% red clover, it became very dominant and farmers ended up just growing thistles. The other point about red clover is that the mix needs to contain the old-fashioned varieties – the new ones have lost their longevity, which was bred out of them in favour of yield.”

A modified mix should have crimson clover, bird’s foot trefoil, knapweed and mallow, he suggests.

“These are broader based, live longer and are not so dominated by red clover. They were originally designed for the long-tongued bumblebee, which was rare at the time. So they appeal to a narrow range of recipients and tend to flower from mid-June until mid-July.”

Wildflower mixes contain a mixture of grasses and flowers, with 15-20 types of flower which are in bloom from May to September.

“These tend to be the types of flower that you would find in a species-rich hay meadow,” points out Mr Nowakowski. “As a result, they work best in low-fertility soils with a sunny aspect – and of course, flower diversity will decline over time.”

Regular mowing in year one will set up the mix for the next 10 years, he recommends. “It is sacrificial to the flowers in that year, but it pays off. Their enemy is fertility and weeds, so site selection is important.”

Wildflower mixes are much more expensive, at £300-£500/ha, acknowledges Mr Nowakowski. “But they appeal to the widest range of insects and they last longer. One sowing will give you 10 years or more, which is a very good period of delivery.”

A warm, sheltered, sunny location is required for one of these mixes. However, wildflower mixes struggle to be productive in March, April and early May, leaving a hunger gap for insects.

“There is a weakness in March and April, which can be put right by wildflowers such as red and white dead nettle, germanda speedwell and green alkanet. However, seed of these is difficult to get hold of.”

An alternative is to maximise the early flowers that are on the farm already, free of charge. “By this, we mean the hedgerow species, such as hawthorn, blackthorn, goat and grey willow. It is amazing how far half an acre of dandelions and some goat or grey willow will go.”

That is why land that isn’t farmed is so important for wildlife, he says. “Some of this habitat is on the farm already, free of charge. So look after it and make good use of it.”

Mr Nowakowski ends by pointing out that a good rule of thumb is to subtract what you already have on the farm, from what you should have – tussocky grass, both with and without flowers, wildflower mixes and pollen and nectar mixes.

“That tells you what is missing. Then you can go out and introduce those missing components.”