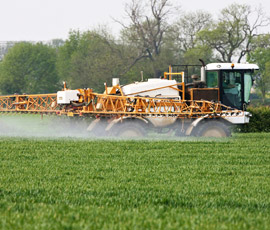 Results from a new range of stabilised urea fertilisers suggest that their application will allow growers to reduce the overall amount of nitrogen applied throughout the season.

Used in a season-long programme, the Delta products appear to act as a precursor for plants to utilise nitrogen in a more efficient way, as well as improving their tolerance to stress and helping to produce a better plant structure.

Manufactured and marketed by Bionature UK, this new range is also available from adviser and distributor Hutchinsons, which is conducting its own trials with the products.

He is convinced of their benefit, having seen positive results across very different growing seasons.

In the dry season of 2011, Mr Lamyman saw winter barley yields increase from 4.2t/ha to 6.5t/ha, as a result of using the product, while winter wheat yields rose from 6.2t/ha to just over 11t/ha.

However, where the urea product was used, the yield rose to 7.9t/ha, with specific weight up to 67kg/hl. A field of Cordiale produced similar results.

“The most noticeable effect is greening, but the plants also have less disease. In general, they have more tillers, thicker stems and a better root system. They are also more even,” Mr Lamyman says.

He is still learning about the best way to use this new urea products on his crops.

“Early applications, made little and often, seem to be the best approach. They can go into a tank-mix without any problems – with the exception of Atlantis – so I tend to add them in the autumn and at T0, T1, T2 and T3,” he says.

They are an additional growing cost, especially in cereals, and have to be combined with standard fertiliser regimes, he acknowledges.

“But there is potential to reduce nitrogen applications, and in potatoes and oilseed rape these can be substantial savings of up to 50%,” he adds.

In wheat, his urea product programmes cost around £135/ha; in winter barley it comes to £95/ha and in spring barley the total is £60/ha.

In potatoes, Mr Lamyman has recorded benefits in yield and quality from the products, as well as better blight disease control.

“We managed to get a Grade 1 packing sample for the first time ever from a sandy land farm. I applied the Delta every seven to 10 days, with the blight sprays,” he says.

Patrick Salmon, director of Bionature UK, points out that the Delta products have been developed to promote the uptake of applied nutrients, by speeding up the metabolic activity of the crop.

Different formulations, depending on the crop’s requirements, are available.

“We have a calcium product and a potassium product, as well as a more general fertiliser known as 1-4-All, which has a marked effect under stress conditions,” he says.

The latter can be used on all crops and has the potential to allow reduced application rates of nitrogen fertiliser, representing an important advance in sustainable agriculture, Mr Salmon adds.

This product is designed as a foliar fertiliser and should be sprayed to ensure a thorough coverage of plants. It contains nitrogen as well as other nutrients such as iron, manganese, zinc, magnesium and copper.