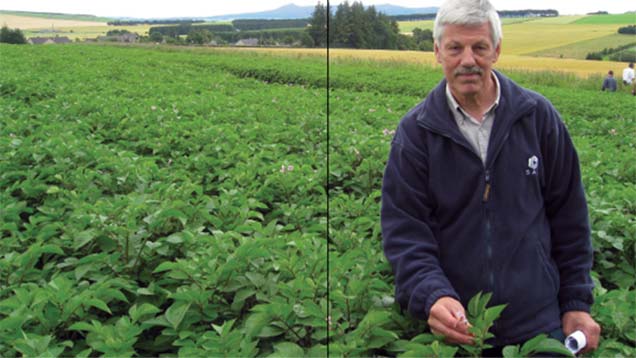 Growers will need to be on their guard to reduce potentially significant threats to crops about to be planted, advises Stuart Wale, consultant and researcher at Scotland’s Rural College.

“Levels of blight in Scottish seed are not overly high, but we did get quite a significant amount of haulm blight in crops last year.

“I think growers were caught out by the rapid growth. However, a good harvest helped potatoes go into store dry, though I did get called out to look at a lot of soft rots in stores, many of which turned out to be blight.”

Seed growers will attempt do as good a job as possible when picking over crops, but he admits it’s impossible to find every blighted tuber.

“Some infected seed will find its way into the ground – it will be at a very low level, but you only need one tuber developing blight on the haulm in the field to potentially initiate an outbreak.”

Denis Buckley of Shropshire-based Highfield Lodge Agronomy adds that the problem is not with those that are obviously infected, because they will rot anyway. It is rather the tubers with very low levels of infection which aren’t showing symptoms.

“These can emerge in the field as primary infectors. We saw that last year with some stocks of Scottish seed – it wasn’t responsible for all the early outbreaks, but was for some of them,” says Mr Buckley.

Farmers purchasing seed should transfer it from bags into boxes as soon as it arrives, says Dr Wale.

“Inspecting seed closely will give a fair idea of what’s present. Then keep it cool and dry.

“It’s amazing how little this is done – most farmers want just-in-time delivery, but it’s much better to have seed delivered at least a week ahead of planting to at least provide enough time to get air through it.”

Greenvale agronomist Denis Walsh believes more growers than usual may look to save their own seed.

“Quite a few customers home-save regularly and all the seed I’ve seen is OK. However, quite a few others who hadn’t planned to are looking at the price of ware and the cost of buying in seed.

“You have to be very wary if you’ve not planned to grow for seed – it’s not something I’d encourage.

He advises to save the best. Tubers must be dry and in good order. Take a representative sample, which means more than the usual 100 tubers if possible, and send it for testing.

“It’s not just tuber blight – we’ve seen some samples with 15-30% virus infection. That would have a massive effect on yield if planted,” he warns.

Dumped tubers are likely to pose a bigger threat than seed, he believes.

“Discarded seed tubers and especially ware could be the biggest problem. Ware stocks are not badly infected, but the Potato Council estimates a 200,000t surplus this season, which is a lot of spuds. Some will end up as stock feed, but a lot will be dumped.”

Potato dumps must be sprayed with glyphosate as soon as shoots appear and retreated as necessary or covered in black plastic, says Dr Wale.

Early protection will be important in crops, with the first blight spray going on as plants meet in the row or before if blight warnings are issued.

“Don’t go too late – start the programme early. Current blight strains are a lot more aggressive and cycle at lower temperatures, so we need to keep intervals tight. Adding cymoxanil to the first couple of sprays will help to eradicate disease in established lesions.”

The current state of the potato market means that seed is not the top concern for some growers, who are finalising their cropping plans for 2015.

“Decision-making is a month behind normal due to the poor ware market conditions,” says Denis Buckley of Shropshire-based Highfield Lodge Agronomy.

“People are wondering what to plant and how much, if at all, and are tackling one problem at a time.

Brush up on potato blight

Late blight is one of the most devastating potato crop diseases, with two aggressive strains that are difficult to control now dominating. In an updated Farmers Weekly Academy, growers can find expert advice on how to protect their crops and gain CPD points.