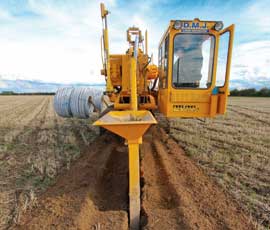 There are plenty of steps growers can take to improve waterlogged soils such as cleaning drains, mole ploughing and creating single furrows to drain surface water.

Surface soils may often be waterlogged due to a combination of over-tilling and heavy rain, while the soil lower down is not saturated.

“I keep hearing that fields are saturated, but underneath they’re probably not – unless they’re in high ground-water areas,” Prof Godwin told a recent soil management workshop.

“Everywhere else, it’s mostly a top problem caused by a nearly impermeable layer of soil near the surface with the water sitting above,” he adds.

The key problem is that in many cases the soil pores in the top six inches are too small because the ground has been tilled too much and it’s been run over too much.

This forms a “perched” rather than true water table and this explains why old permanent ­pasture can absorb 4-5mm/hr of rain, but clean, tilled, bare ground is barely able to cope with these rates.

Offering short-term advice, Prof Godwin showed a picture of a sandy loam field with surface ponding only a few yards from a ditch.

“It’s because the ditch is blocked,” he explains. “Very rarely do you see anyone cleaning ditches nowadays.

“We need to study old drainage plans, walk ditches, clear blockages and make sure the drain outfalls are fully functioning,” he adds.

“Fire-brigade” options to get rid of surface ponding included mini-moling.

“Work as shallow as possible, say only 12-15in, it doesn’t need high power, and don’t use an expander,” he says.

An alternative is to dig a ditch or plough a single furrow to create a groove to take the water away, he adds.

In extreme cases, it might be worth drilling holes to help ­surface water penetrate or even digging soak-aways, he suggests. “By ­sacrificing a small area you could be doing yourself a long-term favour.”

Broadcasting seed via quad-bike, or if necessary by hand, could help by establishing a covering of plants to “pump out water” once the surface layers have dried, he adds.

“This will enable the soil profile to dry out at depth – otherwise it will remain at or close to field capacity for most of the season.”

In the medium term, growers with perched water tables on clay soils should plan to mole drain them to connect to the backfill above field drains in May/June – if necessary through standing crops, Prof Godwin advises.

“The mole’s leg helps get surface water away faster – and think about subsoiling damaged areas after harvest.”

More immediately, wider use of low ground pressure tyres, which add only 50p/ha and £1/ha respectively to the costs of running a combine and ­tractor over their lifetimes, would pay dividends.

“The key is that in the non-trafficked areas rainfall infiltration rates are about 400% higher.”

The effect of compaction caused by wheels was particularly noticeable, he adds.

In a recent trial where water filtered through unmarked soil at 20mm/hr, a single pass reduced that to under 6mm/hr, and after two passes it was down to less than 2mm/hr.