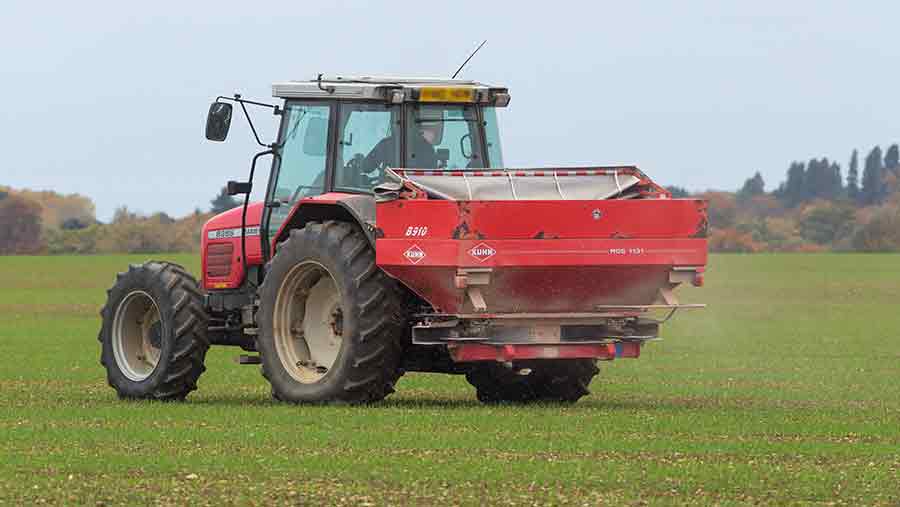 Growers will need to consider increasing their P and K applications this season to replenish soil reserves drained by last summer’s bumper crops.

High yields will have used up nutrient reserves, especially where straw was baled and carted away, putting the yields of the following crop at risk.

To make matters worse, last year a Defra survey of 6,000 farms found that although N-use has remained fairly constant over the last five years, the use of potash and phosphate has decreased significantly.

See also: How to achieve balanced soil and crop nutrition

The figures revealed that potash use had halved since the early 1980s, with the result that only 10% of arable soils were at target indices for both phosphate and potash.

Phosphate (P) is critical for establishment, early growth and rooting in winter cereal crops, while potash (K) is vital for plant nitrogen use and photosynthetic efficiency.

It also helps with plant resistance to disease, frosts and drought and plays an essential role in preventing crop lodging.

NIAB agronomist Andrew Watson tells Crops that a deficiency in potash could dramatically affect the growth and yields of this season’s (2015-16) cereal crops.

“The high yields will be less of a problem for phosphate levels, but it is very important for potash. The effect of removing more P and K is that you need to add more back into the soil and if you remove straw then you double your loss of potash.”

Rothamsted Research trials have shown that around 80% of all applied nitrogen can be used efficiently by a winter wheat crop.

But where potassium is deficient at index 1, N utilisation fell to 70% and where the K was at index 0, less than half of applied nitrogen was used by the crop.

Target soil P and K levels for arable and grassland

Mr Watson says growers’ soil testing routines don’t need to change if a bumper harvest was enjoyed earlier this year, but they should use the off take formula in the RB209 Fertiliser Manual to calculate how much P and K is needed to maintain current levels.

“Most growers will routinely be testing soils every four years and there’s no need to change that if you’ve had high yields this year because you will already have a reasonable idea of levels.”

However, he says that for some crops, notably spring barley, the fertiliser manual’s reference yields for maintaining nutrient levels are slightly low. Therefore, he recommends growers use their own five-year yield average for the crop or even just last harvest’s yield instead.

“The formula reference yields for maintenance in RB209 are a bit on the low side for some crops, like spring barley which is 6t/ha.

“Many growers will be getting more than that and there were quite a lot of cereal crops out there this year yielding 10t/ha or more.”

To illustrate how dramatically straw removal can impact potash levels in soil, Mr Watson used this year’s record breaking wheat crop as an example to calculate the amounts of P and K required as a result of the mammoth yield.

If just the grain was removed from the 16.5t/ha crop, he calculates that an extra 48kg/ha potash and 66kg/ha of phosphate is needed over and above standard rates to maintain soil P and K levels.

On a soil at target indices for P and K, this would mean a total of 93kg/ha of potash and 126kg/ha of phosphate.

But if straw was removed then the potash requirement nearly doubles to 173kg/ha and the amount of phosphate needed goes up slightly to 136kg/ha.

“These figures only apply if the soil is at the RB209 target indices for P and K and will only replace what is removed by the grain and straw.

“If you are removing straw you can be removing significant amounts of potash on top of the effects of a high-yielding crop,” adds Mr Watson.

He notes that lighter soils are more at risk of potash leaching and advises growers to split applications between autumn and spring if large quantities are required as the crop will struggle to use it all in one go, increasing the risk of leaching.