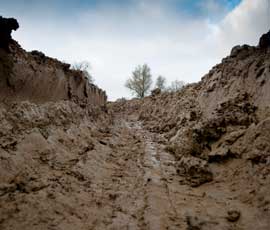 Although lower than the £2.6m figure recorded in 2011, Rural Payments Agency inspections appear to be getting stricter, says Philip Dunn, head of agribusiness consultancy at Brown & Co

“The 2012 figures show that 35% of failures had penalty reductions applied of 5% or more of the business’s single farm payment. That compares with 27% of failures in 2011.”

The most common reason for deductions is failure to comply with livestock identification and registration rules – but that doesn’t mean arable producers can rest on their laurels, says Mr Dunn.

“Livestock failures made up more than 50% of total cross-compliance breaches in 2012 – and I would suggest that a number of those were arable producers who also keep sheep and cattle.”

Often, when livestock make up a smaller part of the overall business, it is easy to lose focus and fall foul of the legislation, he says.

While the proportion of livestock failures is down on the year (from 70% in 2011) there was little improvement in arable compliance, which now accounts for a proportionally larger share of failures.

Of these, one of the most common is not filling in the soil protection review (SPR), says Mr Dunn. “That accounted for 8.7% of all failures, double 2011 levels, and 80% of those farmers lost 5% or more of their single payment as a result.”

To complete the SPR, farmers simply need to record their soil type and field risk, enter any problems encountered during the year, and identify necessary remedial action.

“Last year, many farmers may have driven on waterlogged land, causing soil damage,” says Mr Dunn. “They would need to record that and explain how they plan to alleviate the damage – failure to do so could be seen as a breach.” They should also take account of changes in farmed area, cropping or cultivation methods.

“Penalties do accumulate, so if there are other failures then the cuts could be more severe,” says Mr Dunn.

“And recurrent breaches mean the penalty is tripled the following year, so you could very soon lose a lot of money.”

Penalties depend on the seriousness of the breach, whether it is deliberate, the permanence of the action, and whether the impact is limited to the farm. “Typical negligent penalties range from a warning letter to penalties of 1-5% per breach, with intentional breaches uncapped and upwards of 15%,” he says.

Failure to protect hedgerows and watercourses accounted for 10% of breaches in 2012 – well over twice earlier levels. Sixty-nine percent of those lost 5% or more of their single payment.

“The most common problem is cultivating, spraying or fertilising too close to the boundary,” says Mr Dunn. The protection zone should be at least 2m from the centre of the hedge or watercourse – or 1m from the top of the ditch bank, whichever is greater. “If more than 500m of the protection zone is lacking by more than 0.5m, this could incur a 5% penalty.”

Good manual records or computer packages can help to calculate the correct level of inputs for a field, taking account of any area reductions.

“Beware of anomalies in the records which could flag up over-applications upon inspection,” he adds. “An inspector may go back into your purchase records – an inspection really is comprehensive and can take days on a large farm, so you need to make sure everything is as it should be.”

Most farms already fall within a Nitrate Vulnerable Zone (NVZ), but following a review this year some boundaries have changed, says Mr Dunn. Farmers should, therefore, check the maps carefully, and ensure they comply with the regulations.

“In 2012 10.5% of breaches related to NVZ rules, with more than 70% of those losing 5% or more of their SFP,” he adds. “Make sure you observe margins, and keep records of your fertiliser and manure applications, with particular emphasis on keeping within the maximum nitrogen application for the farm.”