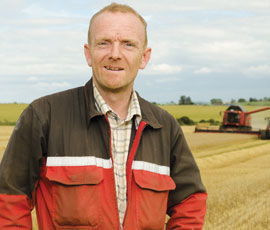 In our final visit, our Scottish and Northern Ireland Barometer farmers reflect on the difficult harvest, as Gus Hartley Russell reports.

Harvest has finally finished for Scottish Barometer farmer Stuart Davidson, being long and frustrating due to the incessant weather.

“I can honestly say that I will be glad to see the back of this year. We have certainly had the worst weather for harvest, but unfortunately the damage to yield and quality was done long before the combines began to roll.

“The frustration is worse when crops looked to have had so much potential coming out of the winter and into early spring. What happened between then and now has been well reported but it’s still very disappointing,” he said.

Delays in harvesting oilseed rape have meant some of the crops had been in the ground for 13 months. “Due to continuing spells of very windy weather we took the opportunity to pull a neighbour in to help us get through the 340ha.

“Final tonnages have not been tallied yet, but yields are expected to be about 2.5-3t/ha, which would be 25-30% less than we would have expected looking at the crop earlier in the season,” said Mr Davidson.

Losses due to wind damage were evident. However, Artoga, a variety known for some resistance to shattering, didn’t disappoint.

In the same vein, winter barley yields have been disappointing with the final yields likely to be in the region of 6.7t/ha. Low specific weights have been the main contributory factor to this poor result. The standout variety was Escadre giving the best yields and quality.

Looking forward to this autumn, the main focus will be to establish next year’s crops.

“At one point getting OSR established in August was looking optimistic because the ground was so wet. We took the risk to cultivate all the ground in the hope of it drying it out and, thankfully, that has paid off and everything was planted by 2 September,” said Mr Davidson.

With OSR planted, attention now shifts to establishing 360ha of winter barley. Varieties to be planted this autumn include Sequel, Escadre, Matros and Cassia.

A change in cropping policy will see winter wheat appear in the rotation for 2013 with 160ha of Grafton and Horatio.

Harvest is seeing contrasting fortunes at Ballyrainey House, Comber, Co Down. The Propino spring barley has yielded well while the potatoes are about 30% down on the average for Northern Ireland Barometer farmer Martin Hamilton.

Although Propino is a malting variety, he grows it for the feed market as it suits his system well. “It is a great variety and it’s not an expensive crop to grow. This season has been very challenging for us weather wise, but the spring barley has stood up and yielded well.

“It has been a pleasure to combine and when something works well you stick with it,” said Mr Hamilton.

The spring barley has been dried down to 14% and will be sold over the coming months. All the barley straw has been round-baled and sold off the field for £14 a bale.

On the vegetable side, 3ha of the Newcastle and Nairobi carrots have been lifted and processed through the factory. Home-produced carrots and potatoes are being supplemented with crops bought in.

Potato yields are about 30% down on their average and this is being reflected through the price. “Last year we were getting £110/t and this year the prices are soaring between £195/t and £225/t. I have the “poacher turned gamekeeper” scenario as I am a producer as well as a buyer of potatoes,” said Mr Hamilton.

“We are still very busy on all fronts, harvesting broccoli and cabbage, as well as our own potatoes. Here we have a team that carry out all the cultivations, spraying, planting and harvesting and then there is a dedicated force that looks after all the washing, cleaning and processing at the plant.

“We have recently invested £200,000 in washing and cleaning facilities to make them more efficient.”

A key highlight this harvest was securing a contract to supply the 2012 London Olympics and Paralympics with mash and dauphinoise potato, totalling 100t. Back in 2004, together with his wife Tracy, he established Mash Direct spurred by 20 years of disappointing potato returns, branching into producing high-quality frozen potato and vegetable mashes. But the highlight to date has been being an Olympics supplier.

Looking ahead, he is looking to launch a new brussels sprout product this autumn. “Brussels sprouts will be cooked and sold whole and so far we have had a very positive feedback from the multiples.”