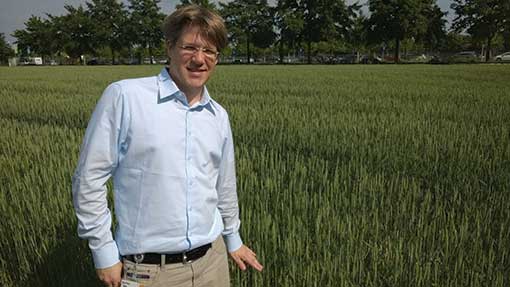 The flow of new pesticides onto the market has dried to a trickle due to a tougher approval process. David Jones travel to Germany to visit one of the world’s biggest producers to see what’s in its pipeline of new products.

Agrichemical giant BASF is warning that it may only develop one new fungicide active ingredient at best by the end of the decade due to tighter regulations.

Marco Moorfield (pictured), BASF’s head of crop management of cereals and corn in Europe, says the gap between major product launches is bound to increase.

Soon after 2000, it was four years between the launch of two major new strobilurin fungicide products by the German group but that timeframe has widened between its last two new launches.

There was a gap of seven years between when it launched boscalid (as in Tracker) in 2005 and its last major fungicide fluxapyroxad (as in Adexar) in 2012, and this gap could widen still further.

“It could be the end of the decade at the earliest before we launch a new fungicide molecule,” Mr Moorfeld tells Farmers Weekly at BASF’s agricultural world headquarters in Germany.

The paucity of new products with different modes of actions will make it difficult to prevent resistance building up for diseases such as septoria in wheat as there are currently only azoles and SDHI which have curative action on the disease.

“The likely timeframe will increase for the whole industry due to tighter regulations,” he adds from the group’s Limburgerhof base, some 50 miles south of Frankfurt in the upper Rhine valley.

Despite the tougher regulatory framework, the group is still confident of adding one new active ingredient in each of its main four business “pillars” over the next seven years.

Horst-Dieter Brix, the group’s head of technical management, says he expects the group will launch a new active ingredient herbicide product with a new mode of action within this timescale.

He also he expects a new fungicide – with an established mode of action but with some newer characteristics – to be launched in the next seven years.

“We are confident we can add one new active ingredient to each of the four pillars by 2021,” says Dr Brix.

He is confident that the group’s new future chemistry will have a better ecological profile.

“Over the next 10 years we are quite optimistic we can bring innovation to the market and are enthusiastic about our new product pipeline,” he adds.

However, Dr Brix warns that the industry is in limbo about how to assess new compounds, as uncertainty still hangs over the future of the key azole group of fungicides.

The EU is currently looking at whether the azoles could be defined as endocrine disruptors and so interfer with hormone levels in humans.

Dr Brix expects the next definition of endocrine disruptors by the EU at the end of this year, but then no final decision made on the azoles until the end of 2015 at the earliest.

The azoles are a major group of fungicides including epoxiconazole (Ignite) and prothioconazole (Proline), and are used in mixtures with the newer SDHIs.

He fears that after the EU assessment of pesticides moved from risk based to hazard based in 2010 some active ingredients will be lost to farming as agronomic factors will not be taken into account.

Dirk Wendel, farm manager of BASF’s commercial farm in Limburgerhof, says his winter wheat crops saw high levels of yellow rust this spring and without azoles the disease would have been difficult to control.

In the early spring he needed two fungicide sprays to stay on top of this rust infection due to the mild winter and dry spring in the Rhine valley.

“At the moment we can control yellow rust, but without epoxiconazole it would be more difficult,” he says.

Despite such uncertainties, the German group, which is the largest chemical group in the world and one of the top five agrichemical producers, is pushing increased investment into searching for new safer molecules.

Agricultural products only accounted for 7% of the group’s nearly €74bn in sales in 2013 but made up 17% of profits while accounting for 26% of the company’s research and development budget.

With growth in agriculture of more than 10% last year the group is projecting annual sales growth of 8% up to 2020.

Still, it is a challenge for crop production innovation, and Dr Brix believes active substances will be lost as agronomic factors are not taken into account.

In addition, individual member states have different focuses with Germany concentrating on water and bees, the UK on birds and mammals while France is looking to cut its overall pesticide useage by 50% by 2018, he says.

“We are very concerned about the political and regulatory environment hampering innovation and leading to lower competitiveness of European agriculture,” Dr Brix adds.