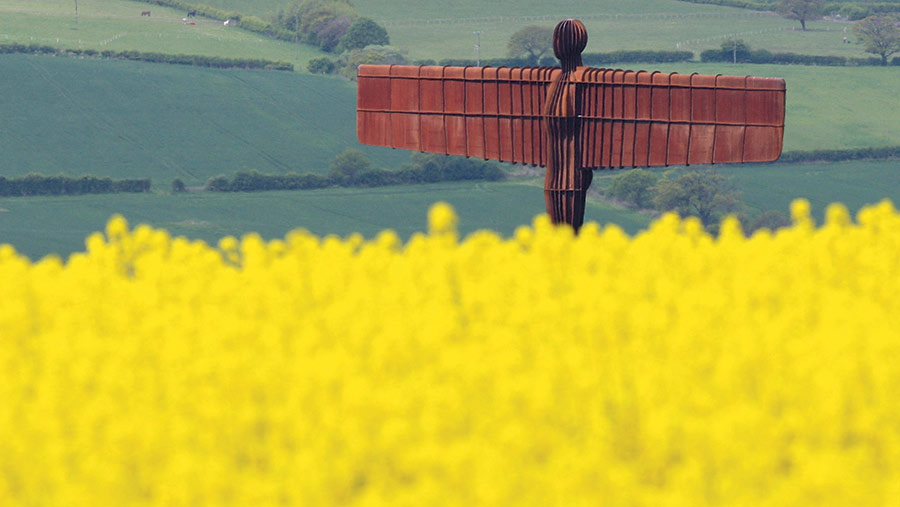 Oilseed rape growers in Scotland and northern England could be set to benefit from the launch of two new varieties, which should deliver consistently higher yields across more difficult terrain.

Both conventional varieties have been bred by independent breeder Mike Pickford who is based in the north Cotswolds and aims for varieties with high yield and consistency over a range of locations.

Mr Pickford believes that his varieties should allow growers to see a rise in their oilseed rape yields.

“There’s no reason why with good soils, correct sowing times, good agronomy, they shouldn’t all be getting on average over 5t/ha, which is significantly higher than the national average,” he says.

Elevation, the first of Mr Pickford’s new varieties, is the joint highest for gross output on the AHDB list in the northern region at 107%, including all hybrids and across different regions. In Recommended List trials, the variety averaged a yield of 5.8t/ha.

Clive Sutton, business development manager at DLF Seeds & Science, the company selling the seed, believes that the figures help to highlight the consistency of Elevation and says the variety offers growers a number of benefits.

“We like to believe it’s a farmer-friendly variety and statistics so far show it has solid all-round characteristics. It has a good, robust agronomic package, produces short straw, good stem stiffness and its pollination provides high gross output,” he says.

In terms of disease resistance, Elevation has a good rating of 6 for light leaf spot, but only 4 for stem canker.

It has a prostrate autumn growth habit, a medium to late flowering pattern, with medium maturity and has a recommended sowing rate of 70 seeds/sq m, for a target of 40 plants/sq m established.

The second variety, Broadway, also in its first year of AHDB recommendation, has a similar gross output yield to Elevation of 107% in the northern region.

Mr Sutton highlights a few of the key benefits that growers could experience with the variety.

“Broadway is a robust variety and has a very strong light leaf spot rating, helping give growers a bit more flexibility, in terms of the timings of their sprays,” he says.

It has a more vigorous and erect growth habit in the autumn than Elevation, which goes down well with growers who are looking for early ground cover over the winter period.

A further benefit of growing Broadway is its medium to late maturity, meaning the variety misses some of the late frosts experienced in the north of the country.

With good resistance to lodging, high oil content and a rating of seven for light leaf spot, the variety has the same recommended sowing rate as Elevation.