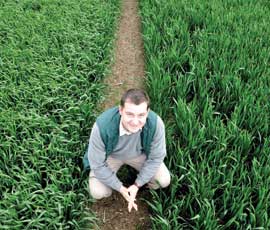 High-yielding winter wheats will continue to form the backbone of KWS’s variety portfolio and growers should target them according to their yield potential in different situations, advised the company at a briefing last week.

“Getting the extra 3-4% yield that varieties such as KWS Santiago, Oakley, Conqueror and KWS Solo have to offer means exploiting their strengths and differentiating between first and second wheat performance, drilling date and soil type,” said UK sales manager, Bill Lankford.

Targeting Group 4 varieties in this way can result in an additional £120/ha, he claimed. “Of course, end use is also a driver. But the latest wheats allow you to have both yield and market suitability.”

KWS Santiago is the right choice for a first wheat on heavier land, his colleague John Miles pointed out. “It will take yields on to a new level at 108%, but it’s a different type to Oakley.”

Its slow autumn development means it’s not an early driller, he warned. “Sow it from mid-September onwards. It doesn’t have the straw strength of Grafton or Scout.”

Spring growth is also slow, he added. “It’s one of the last varieties to need spraying. It produces a big canopy, with broad leaves, so your PGR approach has to be right. It’s slightly taller and weaker than Oakley, so a chlormequat programme with additions is needed.”

For the second wheat position, he suggested KWS Gator, which is the highest-yielding second wheat on the latest HGCA Recommended List. “There will be seed available for autumn 2013.”

An Oakley cross, KWS Gator has performed well on light land. A nine rating for yellow rust makes it a good diversification tool with other Group 4 wheats, he said.

For early drilling – before 6 October – Grafton is ideal, he said. “For late drilling, consider Conqueror, as it is a fast-developing variety.”

“It didn’t make the Recommended List, but we think it will be taken up by growers. It’s given very good second wheat yields, has a longer grain filling period and good straw strength. It suits light, marginal land.”

However, KWS Solo isn’t suitable for distilling, he admitted. “But it performs as well as any hard Group 4 and can go on the feed heap.”

KWS has no fewer than six winter wheat candidate varieties coming up for recommendation later this year, with two of them already attracting considerable interest.

Hard Group 4 KWS Kielder and potential Group 3 KWS Croft both take yields up a step in their market sectors, said wheat breeder Mark Dodds (pictured above), who pointed out that KWS Kielder represented a 4% improvement on KWS Santiago and Oakley, with a yield of 113%.

KWS Croft is a potential Group 3 variety, but with Oakley level yields of 108%, Mr Dodds said: “It’s a very interesting variety and the early indications suggest it will meet export, distilling and biscuit requirements.”

Others include potential Group 3 KWS Rowan, which didn’t perform as well last year as in previous seasons, and Group 4s KWS Cleveland, Leeds and KWS Yaris. Both Leeds and KWS Yaris are being aimed at regional markets, with soft milling Leeds having the distilling capability required by the North and hard KWS Yaris having the septoria and fusarium resistance needed in the West.

Just one of the wheats being grown at Flegcroft Farm, near Whittlesey, this year isn’t a KWS variety, said host grower Philip Bradshaw.

Apart from opting for some JB Diego as a second wheat, he finds the KWS high-yielding feed wheats suit his land. However, with sugar beet in the rotation, he has to make a different variety choice after lifting, depending on when he finishes.

“If we get the beet out in good conditions in November, then we tend to drill KWS Sterling, which is a Group 2,” he said. “It’s always yielded very well for us, but we don’t always get a premium for it.”

If lifting is prolonged, or conditions prevent further fieldwork, he opts for a spring wheat and drills in March.

See these candidate varieties, plus many more for yourself at this year’s Cereals event on 13 and 14 June.