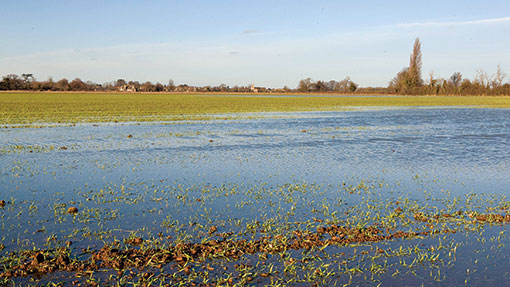 British soils are reaching crisis point and it isn’t being helped by the shortage of soil scientists, says Shane Ward, the first director of the Soil and Water Management Centre. He outlines how the centre can help reverse this.

Why does soil and water management warrant greater attention?

Soil is the fundamental basis of farming and you can argue that nothing can happen without it. But there is a growing problem and many don’t realise its  seriousness.

The trigger was the step change in agricultural mechanisation about 20 years ago. You just have to look at tractors and machinery, they have greatly increased in size and we now we have “super tractors” and “super combines”.

They are not just heavier, these machines have “bigger boots”. Manufacturers and farmers believed they could go anywhere with the modern flotation tyres, but this is simply not true and soils were being damaged.

The technology lulled farmers into a false sense of security because they could not see the damage. But all they were doing was pushing the compaction problem further down.

It’s not just the increased weight, there is a timeliness aspect. Back when tractors were smaller and tyres narrower, you saw them sink into the soil and you kept off. But flotation tyres mean you can still travel and subject soils to loads in unsuitable conditions, without any real visual signs of damage.

It’s all about machine management, but the new generation of farmers are less focused on soil having been sold the concept that modern flotation tyres prevent soil damage.

This has been exacerbated by the collapse of drainage systems that have not been maintained and are coming to the end of their life.

What are the implications and costs of this damage?

The damage to soil is reducing their capability for good drainage and it’s obvious that you get soil pans and structural damage from repeated damage over the years.

I have no doubt that it is reducing crop yields, as well as contributing to increased disease and pest carryover between seasons, because wetter soils are more conducive to pathogens and pests. Blackgrass also tends to favour wetter soils.

Also, you have to ask the question of flooding given the wet weather seen in the past two years.

A lot of the recent flooding problem is due to urban sprawl and the run-off from hard concrete areas. But you have to consider what impact these “concrete soils” are having and whether we would see as much flooding with better draining soils.

The extent infiltration is being impaired is not known, but UK farmed soils are definitely not as free draining as they used to be. This is resulting in more run-off with more water entering watercourses and increasing the risk of floods. There are also concerns on nutrient and soil run-off.

Are you concerned about the declining number of soil scientists?

Soil scientists hold the key, but there are fewer of them right across the universities and research centres in the UK. This is not peculiar to the UK – it has happened right across the western world over the past two decades.

There has also been the loss of key research organisations, such as Silsoe Research Institute which was a world leader in soil and vehicle interactions. The result is a large reduction in the number of soil scientists and facilities at a time when more were needed, with the trend to larger machinery.

This combined with damage to soils is leading to a soil crisis. It is a wake-up call and this is why we established the Soil and Water Management Centre at Harper Adams University, Shropshire.

Shane Ward in a minute 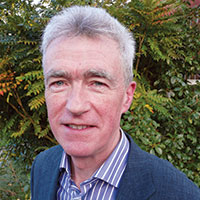 What is your role and what does it involve?

I have dual (part-time) appointments: Professor of biosystems engineering at University College Dublin (Ireland) leading a team of researchers looking at smart farming technologies, such as bio-sensing and big data in agri-food systems. I am also the first director of the Soil and Water Management Centre at Harper Adams University and started this role last April.

What are your interests outside of work?

I have a boat based on the Shannon (Ireland’s main river) and I sail off the West Coast of Ireland in the summer, weather permitting. I have also taken up golf in the past two years – not doing too well: 25 handicap.

Where do you live?

My main residence is in Dublin, but I also have an apartment in Newport for when I am at Harper Adams University.

What is the role of the Soil and Water Management Centre and who is it aimed at?

It is a centre of excellence aimed at helping UK farming make the most of its two most precious assets. It is not just about research, but also a central source of existing information and advice, it offers practical soil and water management education and training and co-ordinates farm-based workshops and demonstration projects.

The centre was established in 2012 by 10 industry partners (GrowHow, Challenger, Vaderstad, Agrii, Basis, Michelin, Cooperative Farms, Agco, Interagro and NRM) and the Rothschild Foundation; and is closely linked with industry.

It also offers benefits far beyond the farm gate, including retailers in relation to food quality, local authorities and water companies in relation to catchment management, agronomists and farmers, and ultimately the public – effectively anyone who is affected by farming.

Research is a key part and there is a team of 20 academics at Harper Adams University. This comprises of a small core of soil scientists, with the rest being engineers, crop researcher and agronomists overseeing projects with a soil and water element.

For example, in the past some projects would have no soil and water element, often being ignored, but this is no longer the case. For example, technology projects looking at irrigation cannot ignore the implications on soil.

How will the centre benefit farmers?

Through the conduct of high-quality research of direct relevance to farming – we place particular emphasis on linking in to the farming community and its practitioners.

We are developing a website allowing subscribers access to information including practical advice, the latest research findings and discussion forums. This will be launched later this year.

Another key route is through face-to-face farmer events and we have a series covering a range of topics, such as controlled traffic farming with expert speakers. Farmers can find out more and book places at events by visiting the Soil and Water Management Centre website.

What is your role at the centre?

My main role is to establish the Soil and Water Management Centre at Harper Adams University. It will focus on soil and water management and there are five key themes.

What are the possible solutions that the centre is investigating?

We have a range of ongoing trials and are also seeking further funding, such as under the European Commission’s Horizon 2020 programme as well as funding from levy boards such as the HGCA.

Controlled traffic farming (CTF) is one possible solution and we have an ongoing project here at Harper looking at the long-term effects: plots that will initially run for 10 years, and probably much longer. Reducing machinery size is not an immediate option and CTF may offer part of the solution.

There is also ongoing work looking at tracks versus tyres and their impacts on crop production and soil structure.

How do you see the centre fitting in with wider efforts such as the government’s Agri-Tech strategy?

Looking further beyond, we are developing a UK network of the key soil and water research players. Under the Agri-Tech programme, there is £90m being spent over five years for a number of centres.

It will include an Innovation Gateway, giving the industry direct access to the national capability in this research area.

Benefits will include a “one-stop shop” to the UK’s soil-water research capability; also, avoiding duplication of efforts and facilities and bringing together resources in terms of buildings, equipment and intellectual capability. It will enable a strategic UK-wide approach to agri-soil research.

I see this network resulting in the UK once again being a world leader in soil and water research and innovation.

The combined group complements each other and has a combined staff of 500 (crop scientists, engineers and agronomists), 20 being soil scientists. It will also include a strong industry partnership, merging the UK research capability in agri-soil research with the needs of the industry.

The capability and impact of this national centre will be far greater than the sum of the capacity of the individual members. This is a major development for UK agri-food industry – a world first.

It will also help us in bidding and getting involved in international research projects. The aim is to have it up and running in 2014.