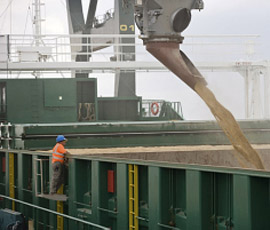 The UK has made good progress in shifting its exportable surplus from last harvest, according to official figures.

Some 329,000t of wheat was exported in December 2011, the highest volume for the month since the 2008-09 season, HM Revenue & Customs data published by the HGCA showed.

That followed a two-year monthly high in November and took total exports for the first half of the 2011-12 marketing season to 1.584m tonnes, out of a surplus of some 2.54m tonnes.

Strong demand has continued into 2012, as buyers around the world look to build stocks against a backdrop of uncertainty about the size of future crops.

“For new crop, speculation about weather damage is rife,” the HGCA report said. Latest meteorological modeling suggested crops in Eastern France, Germany, Western Poland and areas around the Black Sea were most likely to suffer frost kill, although with harsh temperatures continuing in some areas, it was still too early to tell the extent of the damage, HGCA said.

Gleadell trading manager Jonathan Lane said the past week had seen decent buying interest as many key importers in North Africa and the Middle East set up purchases as international tensions returned to the regions.

“The drop in Chicago coupled with low freight rates allowed US to trade into Egypt undercutting more expensive EU/Black Sea supplies. There is plenty of wheat in the world, but the majority is not available.”

Logistical issues in Australia were affecting its ability to export the surplus production and a combination of cold weather and logistics was also limiting availability from Black Sea regions, he said. “As winter weather eases, Black Sea wheat may re-emerge on to the export markets, especially if old crop supplies and new crop prospects don’t decline.”