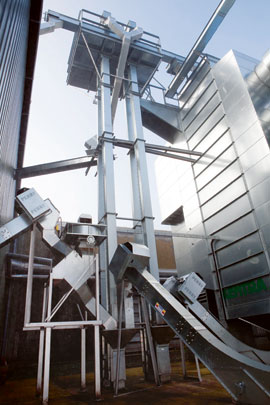 It’s all well and good having a sparkling new grain dryer and gleaming elevators and conveyors to feed it. But what about the capacity to take in grain off the combine and cope with the backlog that inevitably builds up in a wet harvest?

This consideration was high on the list of priorities for two distinctly different crop store projects – a substantial upgrade to an existing 2,930t bin and floor store in Gloucestershire and an all-new 3,000t facility in Buckinghamshire, which has since been extended to 3,800t by converting a lean-to as planned.

“The intake is always a potential bottleneck in a grain store,” says Brian Lear, whose all-new facility completed in 2008 brought centralised storage for the winter wheat, oilseed rape, oats and spring barley grown at Creslow Manor Farm in Buckinghamshire. “Either you have trailers having to wait for the previous load to clear or there is simply not enough handling capacity.”

As luck would have, the new facility was completed in time for the wet harvest that year and the chosen solution – a concrete-lined “tip and go” bunker – proved a success.

“We had a huge wet grain storage problem that year,” he recalls. “The forecourt was covered in wheat because we just couldn’t process it fast enough and that had a big impact on our ability to keep combining when conditions were favourable.”

At Creslow Manor Farm installing the familiar intake pit was ruled out because, says Brian Lear: “They’re never big enough and they never empty fast enough. Also, because they’re difficult to clean out properly, you always end up with a nasty mess in the bottom.”

In contrast, the 140t capacity concrete-lined bunker, which is an integral part of the store, can be cleaned spotlessly at the end of a harvest campaign during which it ensures trailers always have somewhere to tip grain.


The floor space is cleared by two Skandia trench conveyors arranged lengthways in the bunker and spaced to match trailer axle widths. With variable speed control giving the conveyors up to 20t/hr capacity – 40t/hr in total – two “tramlines” quickly clear so that the next trailer can always back in and tip.

“This set-up has worked a treat, providing plenty of floor space to pile up the grain under cover,” says Mr Lear. “Having variable-speed control on the trench conveyors means they can be adjusted to match the dryer or be speeded up to fill two holding bins we’ve added.”


The additional 70t of buffer storage they provide helps the store cope with increased crop acreage and a larger combine, which added about 10t/hr to the rate of incoming grain. The two 35t bins are mounted on steel beams above the concrete wall panels at the inner end of the bunker so they do not reduce the capacity of the bunker itself.

“We’ve had the conveying system modified so that when the dryer is full grain can automatically flow into the bins,” explains Brian Lear. “This helps keep the bunker clear for more incoming grain, and once the dryer is available again, opening a slide drops the bins’ contents back into the system.”

In addition to increasing incoming grain capacity, this set-up has avoided having to add a second dryer. Extending the existing tower dryer was considered, but that would have involved costly modifications to the store roof.

“The dryer used to run out of grain early in the morning, but the extra 70t in the bins is enough to keep it going until we start combining again,” explains Mr Lear. “Last year, we ran the dryer for 24 hours solid over four days. It’s been a simple and relatively inexpensive way of increasing capacity.”

One of the main challenges for store designer and project manager Mike Williams of Tripp Batt was to create a flexible handling system.

It had to accommodate the two intake conveyors while allowing grain to take different routes into the store, be as simple to operate as possible and take up minimum space in the building.