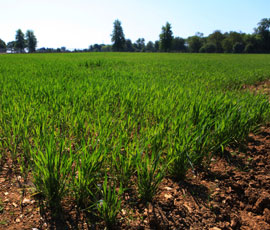 Farmers in the USA pay about an extra $100 per acre for GM seed, and many are questioning whether they will continue to see benefits from using GMs.

“Farmers are paying extra for the technology but have seen yields which are no better than 10 years ago. They’re starting to wonder why they’re spending extra money on the technology.”

One of the biggest problems the USA has seen with GM seed is resistance. While it was expected to be 40 years before resistance began to develop pests such as corn rootworm have formed a resistance to GM crops in as few as 14 years.

“Farmers are paying extra for the technology but have seen yields which are no better than 10 years ago.”
Dan Basse

“Some of these bugs will eat the plant and it will make them sick, but not kill them. It starts off in pockets of the country but then becomes more widespread.

“We’re looking at going back to cultivation to control it,” said Mr Basse. “I now use insecticides again.”

One of the issues if farmers do move back towards non-GMs will be the availability of seed, he said, as around 87% of US farmers plant genetically modified seed.

The top performing countries by crop yield last year were in Asia, in particular China, where farmers do not use GM seed.

Have your say in our GM crops forum.