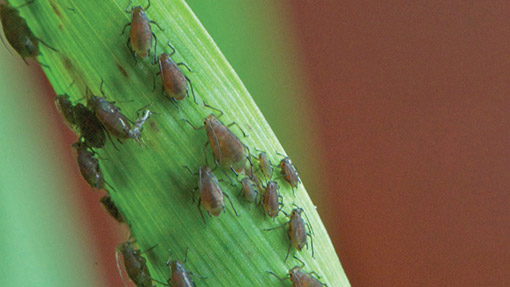 The same technology that helps the police link a perpetrator to a crime is helping scientists understand the reasons why grain aphids are surviving pyrethroid insecticide applications.

High-resolution microsatellite and molecular markers can identify genetic material that may play a role in resistance and track it in individual aphids, explains Brian Fenton of the James Hutton Institute (JHI).

This project aims to understand the genetic background of mutations that have led to grain aphids surviving treatment with pyrethroid insecticides used to control cereal viruses.

“In simple terms, we are testing the DNA of grain aphids caught in traps to pinpoint which mechanisms this species is using to withstand treatment in the field, and how many out there are doing so.

“We know that the peach-potato aphid, Myzus persicae, uses different resistance mechanisms, so we are checking to see which of those, if any, apply in this case.”

So far, the team at JHI and Rothamsted Research have found one modified biochemical pathway common to both the peach-potato and the grain aphid. It is referred to as knockdown resistance (KDR).

Aphids with KDR contain a modified sodium channel protein, insensitive specifically to pyrethroids. The sodium channel is responsible for the passage of signals along the nerve.

In resistant individuals, the insecticide can’t open and overexcite this nerve pathway, causing the death of the insect, says Dr Fenton.

“Fortunately, the sodium channel gene mutation is limited at present to one copy of the gene, which keeps the level relatively low. If both copies of the gene were to carry the mutation, the resistance problem could increase dramatically.”

The latter may happen if interbreeding occurs between individuals carrying the mutation, but generally female aphids reproduce without mating, so the offspring are identical clones, he says.

As yet, there is no evidence for any other type of resistance mechanism in grain aphids. However, of the three others that can be found widely in populations of the peach-potato aphid – elevated carboxylesterase, MACE, and super-knockdown resistance – the latter could develop in grain aphid populations, warns Dr Fenton.

“The only one we can expect where pyrethroids are concerned is super-KDR, but we are hopeful that it won’t appear, at least in the near future.”

Pyrethroid insecticides are typically used prophylactically in the autumn or early spring to control aphids to prevent them spreading BYDV and other viruses. Despite their competitive price, sometimes they are applied at less than the fully recommended field rate, says Rothamsted’s Steve Foster, a partner in the project.

He urges growers to adhere to the advice of the Insecticide Resistance Action Group when managing wheat and barley crops in which grain aphids are surviving treatment.

“Recently discovered cases of KDR resistance to pyrethroids in grain aphid may affect product performance, particularly when sprays are applied at reduced rates. It is therefore important to use full recommended field rates.

“If control remains poor, switch to an insecticide with an alternative mode of action to the pyrethroids,” he recommends.

While the initial beneficiaries of this research will be cereal growers, seed potato producers should also benefit, he says.

Recent work funded by the Potato Council suggests that the grain aphid is very efficient at spreading potato virus Y, and resistance among field populations may have a knock-on effect in that crop.

“In 2011, some cereal growers encountered pyrethroid spray control failures, and by 2012 it was discovered resistance to the pyrethroids in grain aphids was reasonably widespread in England.

“This project looking at grain aphid populations should help to determine whether this form of resistance has the potential to become as virulent as the form in the peach-potato aphid. With this information, we can help cereals and potato growers identify the best insecticide resistance strategy.”

Caroline Nicholls is research and knowledge transfer manager at HGCA