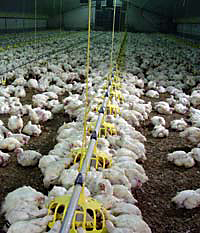 Rocketing fertiliser prices are making farmers much more aware of the benefits of substituting poultry manure for at least some artificial dressings.

That’s the experience of a Kent contractor who took over removing and spreading the output of Cranbrook egg producer Fridays last autumn.

“We’ll be handling about 40,000t a year of poultry manure from several sources, including free-range and organic as well as intensive systems,” says Steve Bryant of Groundscare and General Services.

Having advertised the service, Mr Bryant and brother Andy now supply farmers up to 60 miles from their Rolvenden base, charging £10-20/t for delivery, according to distance.

“We offer to spread it with our Claas 180hp tractor and Bunning rear discharge spreader at £35 an hour. We can apply it pretty accurately at 10m widths, generally at 3t/acre, though I tend to leave the farmers to decide on the rate.”

Having plenty of growers prepared to accept those charges is a sure sign that the materials’ properties are becoming better appreciated, says Mr Bryant.

“It wasn’t so long ago that you could get it almost free. Now it’s seen as a valuable by-product.

“The big advantage is the financial saving. We reckon that, on average, someone growing 10t/ha of wheat should save £127/ha on phosphate and potash alone over three years. That’s with P and K fertiliser costed at £500/t.”

Most poultry manure also contains nitrogen and lime, he notes. “We regard that as a bonus.

“We’ve used it ahead of oilseed rape and had a lot of interest in it for maize, which is a very hungry crop.”

Most applications are planned for late summer and autumn. Under the new NVZ rules, the latest they can be made is 14 October, and on sandy or shallow soils the cut-off date is even earlier, depending on the crop.

“We tried to get most done by 1 October, but the wet weather didn’t help.”

Public reaction must be acknowledged, says Mr Bryant. “When we spread, there’s bound to be a certain amount of smell. But we work to the borough councils’ code of conduct, which is really about using common sense. For example, we won’t spread right next to houses.”