Cameron and Michael Binnie crop 520ha of land in the Borders between Berwick-upon-Tweed and Coldstream, have a farm average yield approaching 10t/ha for their winter wheat, but they warn that growers thinking of taking up the practice need to start planning 12 months ahead.

That’s because making a last-minute decision to cut costs by drilling an already harvested heap could set growers up to fail by using an inappropriate variety or carrying through seed-borne diseases.

See also: Trial shows how to slash the cost of soil compaction

Home-grown seed now accounts for 75% of the 260ha of soft group 3 biscuit wheat and hard group 4 feed wheat varieties grown annually by family run Tillmouth Farming on land joining the River Tweed. They also have home-grown oilseed rape in the ground for the first time this season. 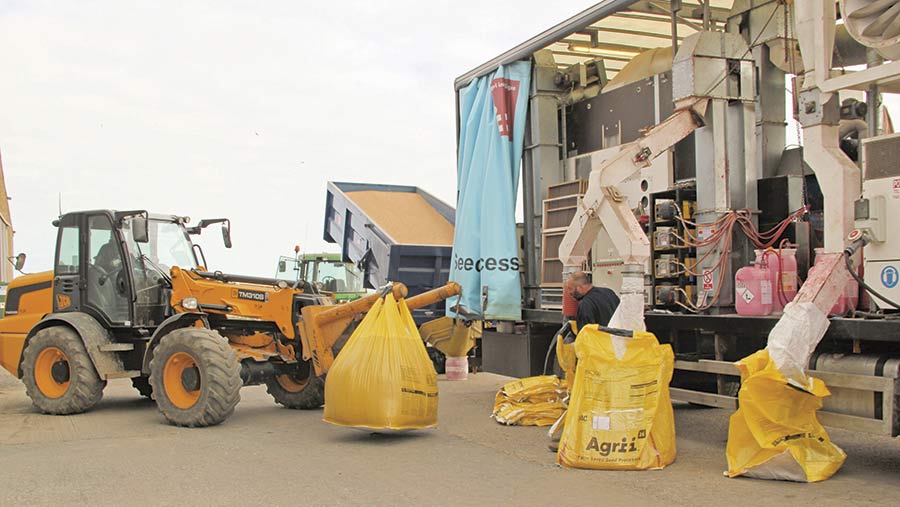 Their strategy is to grow a minimum of 20ha of two new high-yielding varieties each year, and keep seeds for up to two more seasons from one or both crops, depending how they perform on-farm.

They believe this is the most cost-effective way to keep up-to-date plant genetics on the farm, as well as minimising the risk of introducing new weed species, and allowing a quick turnaround between combining and drilling.

This year the two varieties under scrutiny are Barrel and Zulu, both group 3 varieties on the AHDB Recommended List.

The Binnies have previously seen strong performances from varieties such as Revelation and Dickens, with the five-year average wheat yield coming in at a good 9.5t/ha.

Jim Carswell, research and development manager for agronomy group Agrii’s northern region, says that preparation for seed saving should begin even before the parent crop has been put in the ground, with site selection and soil testing.

He recommends choosing a weed-free first cereal slot in a field to minimise the number of volunteers polluting the seed sample, and conducting a broad-spectrum soil analysis to check for micronutrient deficiencies.

Growers should consider getting one-quarter of their farm soil tested each season, he says, as an up-to-date understanding of soil nutrients is the best way to plan a nutrient programme.

He says that over half of soils have more than one micronutrient deficit, adding that without this soil testing work fledgling plants are likely to suffer from the “hidden hunger” gap, which is predominantly a shortage of manganese, copper and zinc.

Mr Carswell highlights two management stages crucial for getting a clean sample, which will likely be familiar to milling wheat specialists – between planting and the three-leaf stage, and during and after ear emergence.

Crops should be carefully monitored for aphids post emergence to allow a timely spray against any barley yellow dwarf virus-carrying aphids – an application that is likely to become even more crucial if the neonicotinoid Deter (clothianidin) is removed as a seed dressing in the future.

While optimal disease control is important throughout the season to protect yield potential, Mr Carswell emphasises that the timing of the T3 spray is critical.

This is to prevent foliar diseases infecting the ear, as well as specific ear diseases, which can affect seed size and quality, lowering specific weights and potentially infecting the subsequent crop.

Foliar diseases that can affect the ear include septoria nodorum, yellow and brown rust and powdery mildew, while specific ear diseases include various types of fusarium and sooty moulds in wet seasons.

Mr Carswell says that an azole application between growth stage 61-65 is essential, and growers protecting crops for seed should get the spray on at this stage regardless of when their T2 application was made.

This can be as little as seven days previously during a good growing season, but leaving the spray until later could let infection into the crop.

If weather conditions prevent spraying at this time, Mr Carswell says that should “really ring alarm bells”, particularly in high risk situations such as following maize or where the ground hasn’t been ploughed during establishment.

A full-scale plant growth regulation programme should also be carried out, alongside further micronutrient monitoring, by taking plant tissue samples through the season.

A micronutrient seed dressing will not keep crops going longer than six weeks, Mr Carswell reminded growers, so if there are soil deficiencies it is highly likely that they will need extra nutritional sprays as part of the early spring workload.

While there is no optimum time of day to take tissue samples, Mr Carswell advises taking them at the same time of day each time to improve accuracy when comparing data.

Michael Binnie says they prioritise the care of crops being used for seed at harvest time, with the combine being cleaned thoroughly to prevent the seed being contaminated with any other variety.

He says that they do one run through the headland of a field being used for seed when arriving after harvesting a non-seed crop.

The combine guards are then opened and the fan run full blast to clear as much seed as possible from the machine before starting to harvest the seed crop proper.

To harvest as dry and even sample as possible, all tramline strips are avoided, with these being cut at the end and kept separate from the seed.

Once seed crops are in the shed, Michael says they get priority treatment to get them down to a moisture content below 16%, something that frequently requires the use of the dryer, particularly as glyphosate can’t be used for desiccation on seed cropping.

Mr Carswell recommends that any grain that is going to be bulk stored over winter and beyond be brought down to 14.5% in order to prevent grain mites breeding and to restrict fungal growth.

While they have the luxury of both a continuous dryer and a batch dryer on the farm, Michael says he favours the use of the batch dryer as a trial sample can go through before the seed to get it fully optimised, whereas the continuous dryer takes some time to respond to the settings being changed.

He recommends sacrificing throughput where conditions permit to allow seed to be cooled and dried over a lower heat for a longer time to avoid any risk of lowering the germination rate.

Before getting seed in the ground, the final stage of management is to get it cleaned and treated with a seed dressing, with Cameron and Michael making use of one of Agrii’s 31 mobile grain processors, co-ordinated in the north by Agrii agronomist Gavin Fleming. 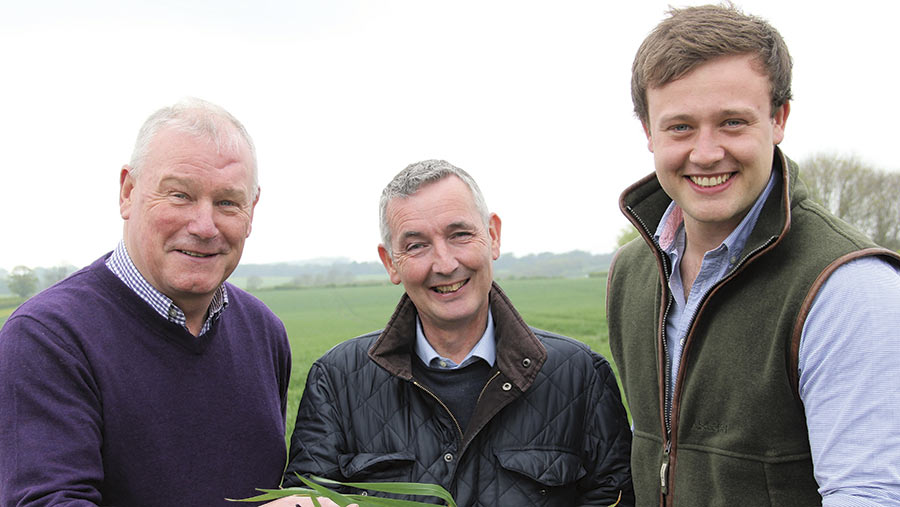 Mr Fleming advises growers who are thinking of using farm saved seed to get a sample viability tested before the lorry arrives on the farm to check that no accidents have occurred during drying.

A tetrazolium viability (“rapid TZ”) test will take as little as 24 hours on freshly harvested seed and will be the best option for growers who need to get the seed in the drill as quickly as possible.

In addition to ensuring that they have the correct varieties on their farm when they want to start drilling, the Binnies point out that getting seed treated on farm allows them greater flexibility to use different seed treatments on a field-by-field basis if required.

Seed that is going to be used as a second wheat is likely to get a dressing of Latitude (silthiofam), while others will receive Redigo Pro (prothioconazole + tebuconazole) for the control of seed-borne diseases.

The majority of seed is also likely to get a nutrient seed dressing such as Take Off ST or I-man (manganese), with cleaning and an application of a single-purpose dressing costing in the region of £70-75/t of seed treated, which works out at £12-15/ha.