Wheat varieties that can be drilled very late came to the rescue for growers struggling to get any winter cereals into the ground last season because of the extremely wet winter, with some fields not being dry enough to drill until March.

Spring wheat seed was in short supply, however, some winter varieties, such as Skyfall, have very wide drilling windows.

We catch up with two growers who planted Skyfall in March and find out whether the crop was a success, along with any lessons for next time.

Third-generation farmer Jamie Stokes of Tithe Farm in Cambridgeshire, near Huntingdon, planted nearly a quarter of his family farm to Skyfall, from 19 March onwards, as he was unable to plant any winter wheat due to 2019’s difficult winter weather conditions.

Usually, Mr Stokes deploys a traditional cropping plan of winter cereals, growing varieties such as Lili from about 10 October onwards, before switching to a later-drilled wheat, such as Skyfall.

“It was the first year that absolutely none of my cropping plans had gone the way that I had hoped.

“We couldn’t plant any winter wheat in the ground and getting hold of spring crop seed was a real struggle. So, in the end we went for drilling plan G!” he says.

It was not until March that there was a small window of opportunity for Mr Stokes and his family to drill the 215ha of Skyfall as a result of continuous rain and waterlogged soils. 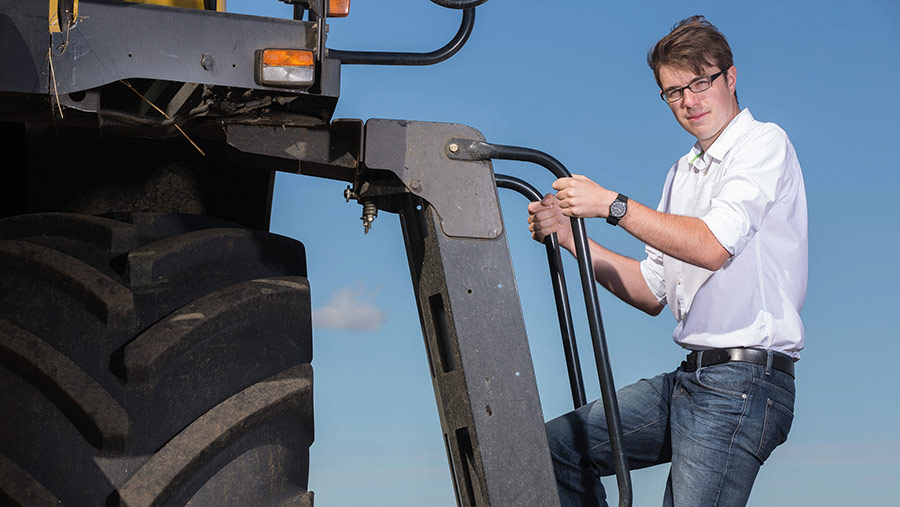 However, after drilling, the weather made a rapid turn for the worse, preventing the crop from being rolled as no machines were able to get on the land, meaning seed to soil contact was impaired.

“By the time the ground was safe to travel on, the soil had completely dried-up and gone rock hard, meaning we would have done more harm than good.

“There was just no right answer. If we had waited longer for the weather to dry up before drilling, there would have been no moisture in the seed-bed for seeds to germinate,” he admits.

Harvest was completed on 13 September, yielding 4.5t/ha. Mr Stokes explains that poor weather conditions, a sub-optimal seed-bed and consistent rain at harvest that prevented the crops from being cut for two to three weeks, limited yield.

However, he points to the 2018 harvest, where his Skyfall – which was planted on the same date as last year’s crop – yielded a very impressive 9.5t/ha, making it the highest-yielding crop on the farm, due to the perfect spring growing conditions that season.

This was the first time the variety was grown on farm, as Mr Stoke’s wanted to try a new method of spreading workload throughout the year, going against the advice of his breeders and agronomists, which highlighted that trialling new ideas can pay off.

Skyfall benefits
Skyfall, therefore, was just the ticket as it provided the family team with a wider drilling window from November until the spring, providing flexibility and releasing pressure off busy times of the year.

“As we have one drill and a small, four-man team, minimising workload and reducing pressure during busy periods of the year is a priority.

“We try to ensure that when we do something it’s at the optimum time, rather than just mauling something in to the ground and regretting it a couple of weeks later,” he says.

Another advantage of using later-drilled wheat varieties is for blackgrass control, as the hard-to-control grassweed is a prominent issue on their 1,000ha farm.

“If given the chance, blackgrass can grow better than anything else on the land,” admits Mr Stokes.

Drilling later is, therefore, a key objective as planting crops earlier would only interfere with blackgrass control.

“Just because there is a weather blip, we still need to do what’s best for our fields and not base our reasoning on the sole experience of last year,” he says.

This year, Mr Stokes plans to get back to his normal rotation, of winter wheat, winter barley, spring cereals, followed by rapeseed, leaving just 40ha of Skyfall to be planted that will be kept for seed.

He aims to use up all the leftover winter seed from last year that was never used, with 300ha of winter wheat to plant.

However, no oilseed rape has been planted as the family team only direct drill rapeseed into winter cereal stubble, after discovering this technique significantly reduced flea beetle attack, and with no winter cereals planted last year, no OSR will be grown.

Farmer and contractor James Lee, of Lee Farm Services near Crediton, Devon, also planted Skyfall last season and highlights the ability of the variety to produce a successful crop, despite being drilled after its recommended safe sowing date. 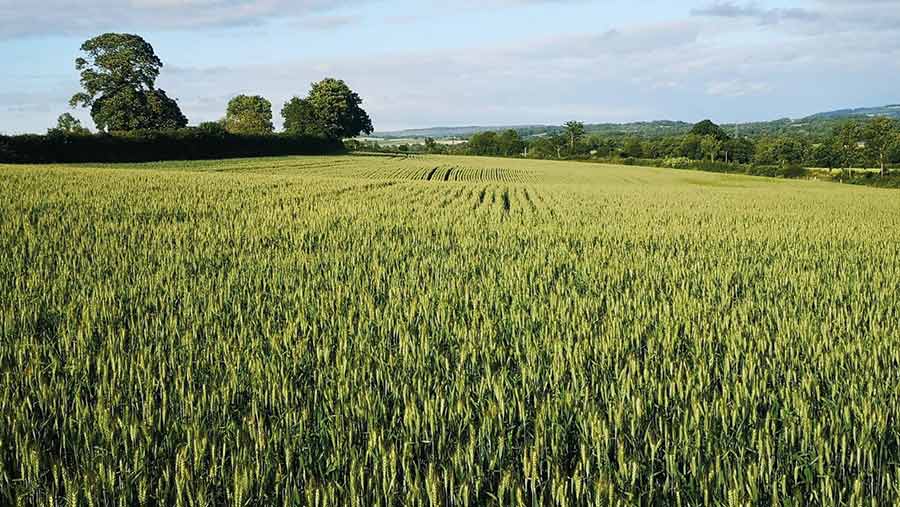 He planted the variety for the first time, on 28 March, where it was later harvested at the beginning of September, with yields of more than 5t/ha.

“The Skyfall yield was on par with rest of the cereals grown, but admittedly the spring barley and spring oats did yield better,” says Mr Lee.

He talks of the many benefits of planting a later-drilled wheat variety such as Skyfall, with the main positive being its flexible drill date, allowing it to be successfully planted at the end of the drilling season and still yield well.

“It is a useful and reliable variety that spreads workload, with last season showing just how flexible it can be with drill dates. It acts as a safe bet for us – it does what we want it to do,” he says.

Mr Lee adds that as the West Country is a predominately livestock area, Skyfall also has good potential for wholecropping due to its wide drilling window from October until March.

This season, however, he isn’t intending to plant Skyfall as he wants to condense his wheat varieties grown on farm, with Saki, Graham, Extase and Sundance now selected.

He explains that he still has some home-saved Skyfall seed from last year, which he plans to use as a back-up in case of another prolonged wet autumn, which will, once again, force his original plans to change.