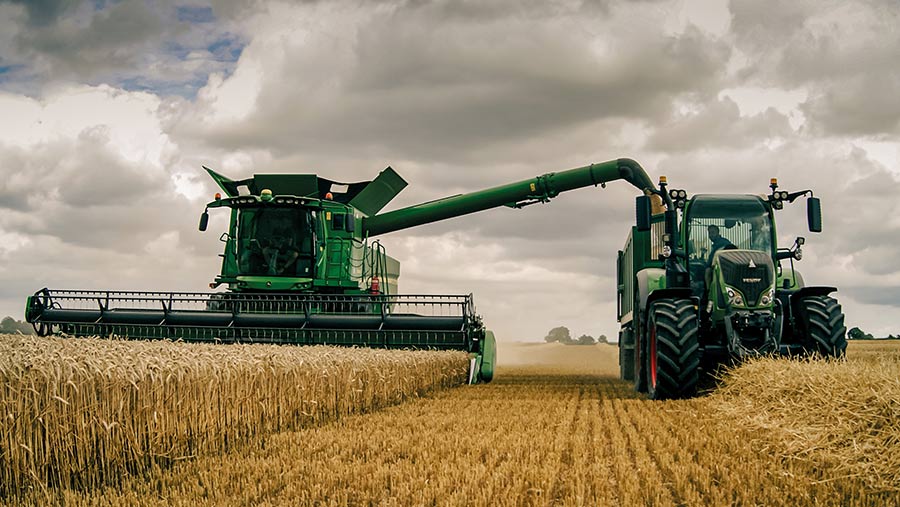 The combination of plants already under stress and a disease explosion that hit crops in late spring and early summer is thought to be behind the discrepancies seen in wheat variety performance in 2021.

A wet winter, followed by a cold, dry spring, then a wet May and dull June, meant that crops had very little time to recover and adapt as they developed before septoria made its presence felt.

Where the disease came in rapidly, there were detrimental effects on both yield and specific weight, highlighting the importance of fungicides and appropriate spray timings in high-pressure situations.

Starting with specific weight, he mentions Firefly and Wolverine as at the bottom end, with Group 1 choices Zyatt and Skyfall also showing huge variation.

“Specific weight is an innate feature of a variety so some will always start from a lower base, but it is also hugely impacted by disease,” he notes.

“Even varieties that look good on paper were vulnerable in 2021 if fungicide programmes went awry.”

Clare Leaman, Niab Tag’s cereal variety specialist, agrees that one of the growing season’s trends was low specific weight, with some varieties being very disappointing, although wheat yields were only slightly down on the five-year average.

“Disease played its part, but growers underestimated the impact of the tricky season on plants,” she recalls. “It was a high stress and high disease pressure year.”

In terms of yield, the top performers in the Frontier-replicated trials among the current variety line-up were Insitor and Extase, which broadly reflect the findings of the Recommended List trials, with Zyatt also doing well.

As previously covered in Farmers Weekly, Extase didn’t perform as expected everywhere, with growers reporting variability. Mrs Leaman points out that its five-year average RL yield figure of 101% held up, making it the highest yielding of the bread wheats.

“We know that some sites of Extase didn’t do well, but it has to put into the context of the year,” she says.

“It isn’t one of the highest-yielding varieties on the list and its development isn’t suited to early drilling.

“When you think about the environmental conditions that some applications were made in, there are any number of reasons why things might have gone wrong.”

Mr Knight accepts that Extase has dipped in some instances, but notes that it accounted for 10% of the winter wheat area in 2021 and suspects that some of it was drilled at the wrong time.

“It had a very good year for most growers and its disease resistance is still intact,” he stresses.

Insitor is named by both commentators as having performed well in 2021. New to the RL last year, it has always shown high yield potential, reports Mr Knight, and has only been beaten by candidate Champion in Frontier’s trials this year.

“It came in under the radar in 2020 and has stormed ahead this year. It’s put Skyscraper in the rear-view mirror.”

The hard feed types Champion and Dawsum are still creating most of the interest in the candidate group, after another solid performance in both treated and untreated trials.

While Champion offers slightly more yield at this stage with a figure of 106%, Dawsum brings both yield and specific weight.

The two potential breadmakers, Mayflower and Palladium, are both considered to be Group 2 types. Neither add yield, but they do bring disease resistance.

Other hard feed wheats that have been consistent are Gleam, Graham and Costello, says Mrs Leaman, which she believes is good news for growers who value that reliability.

Less good were newcomer Cranium and barley yellow dwarf virus-resistant Wolverine – the latter of which was 5% down in 2021.

The Group 3 wheats were generally disappointing as septoria was aggressive on most of them, especially where Cougar parentage was involved, with many being a couple of percentage points down on their five-year average, Mrs Leaman continues.

“There’s a whole range of resistance scores in this group, and if you use the one-year rating, you can start the new growing year with the right information.”

Mr Knight points out that the drop in septoria rating in this group has not been uniform, with varieties such as Astronomer still having a good score.

“We have to avoid broad-brush approaches and over-simplification. There are both major and minor genes involved in resistance.”

He adds that the septoria situation is very regionalised, so suggests that growers make good use of local trials information alongside the new ratings if they are in any doubt.

Another variety with Cougar parentage is the soft Group 4 Saki, which was 2% down on its previous performance.

“It wasn’t a disaster, although septoria did have an impact. Saki can still be managed and will have a place on farms.”

High levels of septoria seen in the 2021 growing season on unexpected varieties have prompted AHDB to issue septoria ratings for 2022-23 earlier than usual, with many of the scores declining.

Following concerns about the breaking of genetic resistance in varieties with Cougar in their parentage, the new ratings have been prepared using the standard three-year dataset, with each year weighted equally, as before.

In addition, the decision to publish a one-year dataset was made to help reveal the influence of the 2021 season, as those ratings are based on 2021 data alone.

As Paul Gosling of AHDB explains, the one-year dataset may help to indicate the level of resistance in the coming 2022 growing season and guide the fine-tuning of fungicide programmes, even though it does introduce some volatility.

“We just don’t know how septoria populations will evolve,” he says.

“The Cougar-virulent isolates could become more common, or their frequency could reduce.

“Disease ratings are only able to reflect recent pathogen populations – they can’t predict the future.”

The septoria explosion in June on varieties with a Cougar pedigree means that these now have lower ratings than before and have suffered the largest falls, although almost all varieties have seen a drop.

Cougar, which was introduced in 2013, had the highest septoria rating of 7 on the Recommended List at the time.

By 2015, its resistance had declined and a Septoria tritici variant that was able to cause disease on the variety was identified. 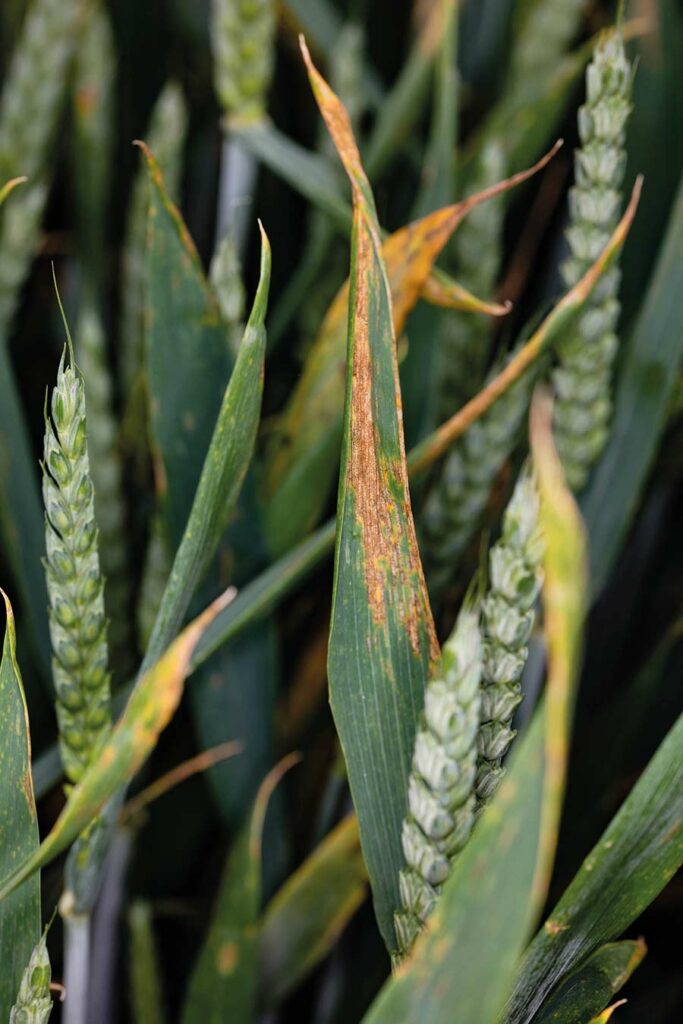 As a result, Cougar was removed from the Recommended List in 2016.

However, its use in breeding programmes means that the current edition of the RL includes eight varieties with Cougar genes in their background.

Not all of these varieties have been affected equally, stress Mr Gosling.

“Resistance is based on the cumulative impact of many minor disease-resistance genes, as well as the Cougar resistance.

“In addition, the problematic septoria variants are not distributed uniformly across the UK. It seems these varieties are holding up better in Scotland.”

Of greatest concern is that all of the five new Group 3 varieties are affected, with all of them having lower septoria ratings than before.

Two other notable casualties of the new ratings are Firefly and Saki.

Winter barley yields were down in 2021, slipping to nearly 0.5t/ha below the five-year average.

With no clear pattern to the results, both high-yielding and low-yielding trials were spread across the country, as well as by drilling date and soil type.

The six-row hybrids had a good year and remain the highest-yielding option, with Thunderbolt topping the trials on 108%.

“There’s a good choice of hybrids and seed of some is still available,” says Jim Knight. “They will be needed more than ever this year for their competitiveness against blackgrass.”

Otherwise, the two-row feed variety Tardis has performed well on 105% and is showing consistency.

The other two newcomers, Bolton and Bordeaux, are slightly back on their previous performance.

Of the candidates, conventional six-row Feeris is picked out for its yield and barley yellow dwarf virus tolerance combination, which is a significant step on.