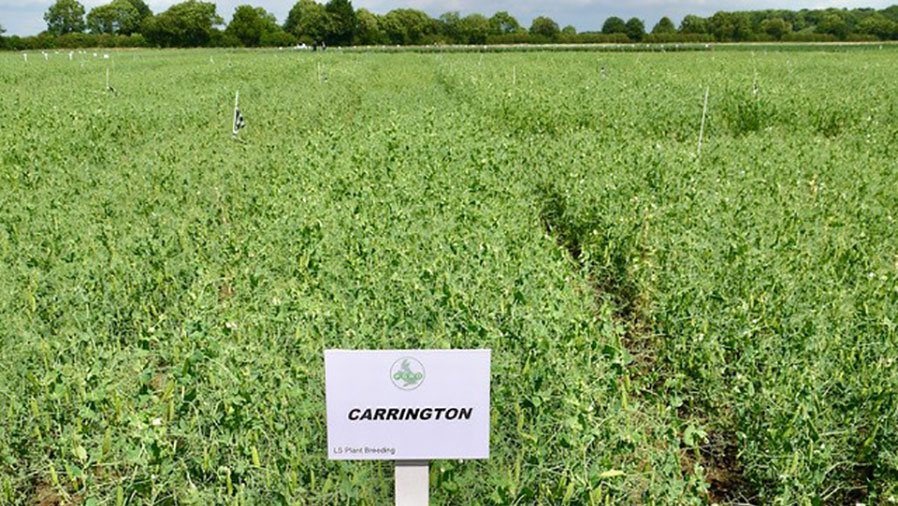 The Processors and Growers Research Organisation (PGRO) has added three new varieties to its 2022 Descriptive Lists for pulse crops.

The three additions include a green pea that is now the top-yielding combinable variety, a yellow pea with the highest downy mildew disease rating, and an early-maturing winter bean.

PGRO principal technical officer Stephen Belcher says that while Pantani’s yield is a bit lower than the top-yielder Vespa, growers should really compare it with Honey from Senova because of its earliness of maturity, for which it scores 7.

Vespa, also from Senova, continues to perform well in trials, with top yields of 108%, and is closely followed by Vincent, from the same breeder, at 106%.

With peas, the green category saw the addition of Carrington from LS Plant Breeding, which is the top-yielding combinable pea at 117%.

In addition to yield, Carrington also has a very good rating for downy mildew (8).

The second newcomer is Senova’s yellow pea Rivoli, which has very good standing ability (7) and a protein content of 22%.

Mr Belcher says while it is lower-yielding at 103%, it offers the best downy mildew rating in this group (yellow) with a score of 8.

He points out that growers now have nine pea varieties that score 8 for downy mildew:

This is particularly valuable given that no seed treatment will be available in 2022 after the loss of metalaxyl, which was widely used to manage the disease

“Genetic resistance is now the main line of defence against downy mildew, as there are no effective foliar fungicides,” says Senova seed sales manager Tom Yewbrey.

“Used alongside rotational measures and cultural control, variety choice can make a difference.”

However, Mr Belcher adds that varietal resistance to downy mildew can vary depending on the races present in the soil.

There were no new additions to the spring bean list, but Lynx from LS Plant Breeding is now ahead of its competitors with a yield of 106%, having been second on last year’s list, with Ghengis and Stella following at 105%.