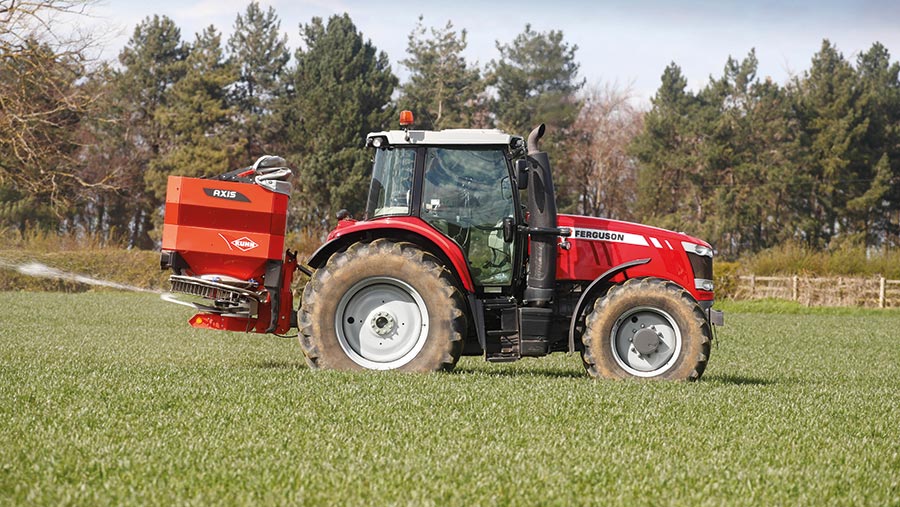 Growers looking to cut back on fertiliser rates next spring because of the high prices are being advised to take a field-by-field approach.

Last year, fertiliser costs averaged about 65p/kg of nitrogen and the best-case scenario for those who ordered earlier this year is 80p/kg of nitrogen (June price), says Ceres Rural partner and agronomist Jock Willmott.

However, those who put off buying this summer thinking prices would ease are now looking at more than £2/kg, he says.

See also: How one Yorkshire direct-driller is tackling a drainage problem

“This is a significant hit,” he says.

“So unless farmers have bought all their fertiliser at under about £1.10/kg of nitrogen, we are probably looking to reduce rates, especially if grain prices come under pressure and spring nitrogen prices either remain high or delivery is an issue.”

Yield will be a key factor, he says, highlighting that farmers cannot afford to have a poor harvest in 2022.

Looking at the projected gross margins with fertiliser costed at £2/kg, the difference between a low-yield harvest (such as 2020) and a high one (sush as 2019) equates to a £463/ha difference in gross margin.

How much to cut by

Looking at the Niab economic optimum table, if farmers bought fertiliser at £1.05/kg, they are only looking at a 10-20kg/ha reduction in nitrogen at current wheat prices, so they really don’t need to do anything unless commodity prices drop.

For those who bought at higher prices, they will need to trim rates. But to deliver a significant cost saving, he says rates will need to be reduced by 30-60kg/ha of nitrogen.

Rather than making blanket cuts, he believes the best strategy is to target nitrogen where it is best used, thereby maximising responses.

Looking at nitrogen response curves for 25 sites in wheat, there is considerable variation in response, as utilisation within the crop is influenced by so many factors – drilling date, soil structure/fertility, temperatures, moisture etc.

For example, the curves show that trimming rates in lower yielding fields will see less impact on yield than those fields with the big yields.

Therefore, he believes farmers should target less-responsive fields and varieties.

Timewise, he advises against doing it for the first pass, as this one is important for building the canopy and mitigating against potential early drought.

“Then later in season when we know what the wheat and fertiliser prices are doing, this is when to make the decision.”

Also, farmers will then know if a field is going to be 8t/ha rather than 12t/ha, so are able to prioritise trimming rates on these lower potential fields.

Sulphur assists nitrogen entry into the plant, so adequate levels are important in helping farmers get the most from nitrogen fertiliser applications.

Sulphate is not readily held in soil, as it leaches at a similar rate to nitrate, says Jock Willmott. Regular use of organic manures may mean there is more in the soil.

If farmers do have a limited amount of sulphur fertiliser, he advises prioritising oilseed rape and light land crops for sulphur. Also prioritise milling wheat and high nitrogen use crops/sites.