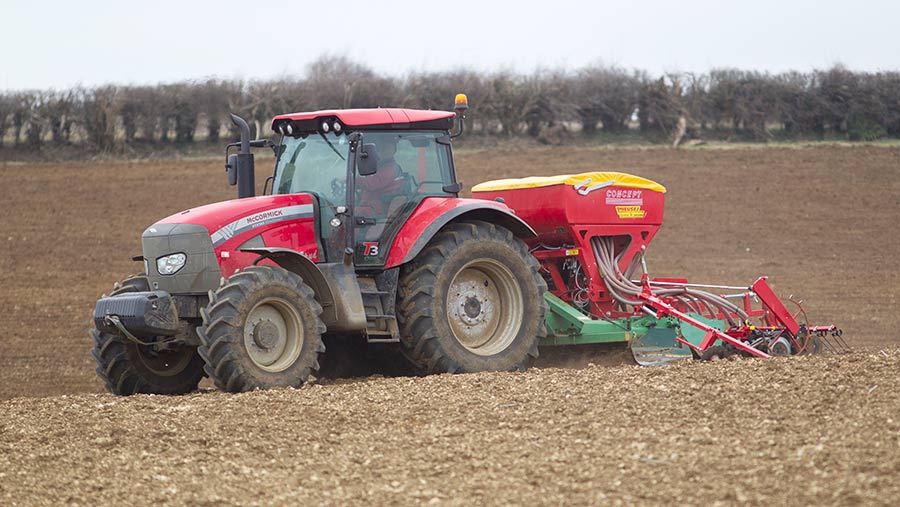 The drilling window flexibility offered by spring wheat has never been more appealing, after the most difficult autumn conditions that many can remember disrupted winter cereal plantings and root crop harvesting.

With just one addition to the Recommended List for this year – Group 2 Giraffe from KWS – the range of varieties means spring wheat has something for everyone who finds themselves drilling from November onwards – whether they planned to or not.

Newcomer Giraffe differs from the two varieties to join last year’s Recommended List, Hexham and Talisker, as they are both hard Group 4 types.

Their main advantage over the Group 1 and 2 varieties in such an unexpected season is that there is no need for separate storage at harvest or specialist management in the field.

Newly recommended Group 2 variety Giraffe is lower yielding than Cochise on 103%, says Paul Gosling, AHDB Recommended List manager, but it has a better grain quality and is slightly earlier.

“It has shown variability in baking tests, which is why it is a Group 2,” he says. “And despite its name, it is one of the shorter spring wheats.”

However, Hexham from Senova is the only one of the two to have had any seed availability this year, after KWS decided to concentrate on others in its spring wheat portfolio.

With a treated yield of 103% when sown in the spring, Hexham is the best-performing spring wheat from late-autumn sowing, where it yields 106%.

Its other in-demand characteristic is a high untreated yield of 93%, which is reflected by its good disease resistance scores of 9 for yellow rust and 7 for septoria.

Spring wheat has a clear advantage over late-drilled winter wheat as there is no pressure if you miss your target drilling date, says Niab Tag cereals specialist Clare Leaman, or if soil conditions restrict your following crop options.

“After sugar beet and potatoes, for instance, spring wheat is a good fit, especially if you need to do some remedial work to soils or it’s still too wet to travel. Where possible, it can be sown in late autumn, but it also gives the option to drill in the spring.”

Lower growing costs and its ability to fit into a blackgrass control strategy are further benefits – things that are often overlooked in a kind autumn, when winter wheat drilling is in full flow and herbicide programmes are already under way.

“Hexham offers the best yields of any spring wheat from late autumn sowing, so it is likely to find a place in this slot,” Ms Leaman says. “With a 9 for yellow rust and a 7 for septoria, it is also one of the more resistant types.”

It is a later-maturing spring wheat, she adds, but that characteristic will be less pronounced if it’s sown in late autumn. “It has the same maturity as another Group 4 choice, Kilburn.”

Interest in Hexham has been centred on its late autumn-sown performance, confirms Jeremy Taylor of Senova, but there’s also attention being given to its untreated yield, as that suits the current mood.

“With fewer agrochemical choices, greater scrutiny of farming practices and recent political uncertainty, there is a desire to keep costs down without sacrificing performance. Hexham meets those criteria.”

Other varieties include the Group 1 wheat Mulika and Group 2 choice Cochise, which together account for almost 70% of the spring wheat market, thanks to their premium earning potential. Both also offer orange wheat blossom midge resistance, but they differ on yield.

Mulika, which remains the spring variety of choice for most millers, was recommended in 2011 and has a yield of 94%. Cochise, which came along in 2017, has a yield of 105%, but more variable baking performance.

Will Compson of KWS confirms there is more Cochise seed available this year, after there were limited supplies for its first two years. “Cochise is a true spring wheat,” he says.

“If you want a late autumn-drilled Group 2 variety, then Giraffe and Chilham are better options.”

Mr Compson adds that the spring wheat market shrunk last year and was just 4% of the total wheat area. “In good years, when the weather is behaving, it tends to be seen as a last-resort crop,” he says.

“That can’t be said of it this year – it’s likely to get some growers out of a tight spot.”