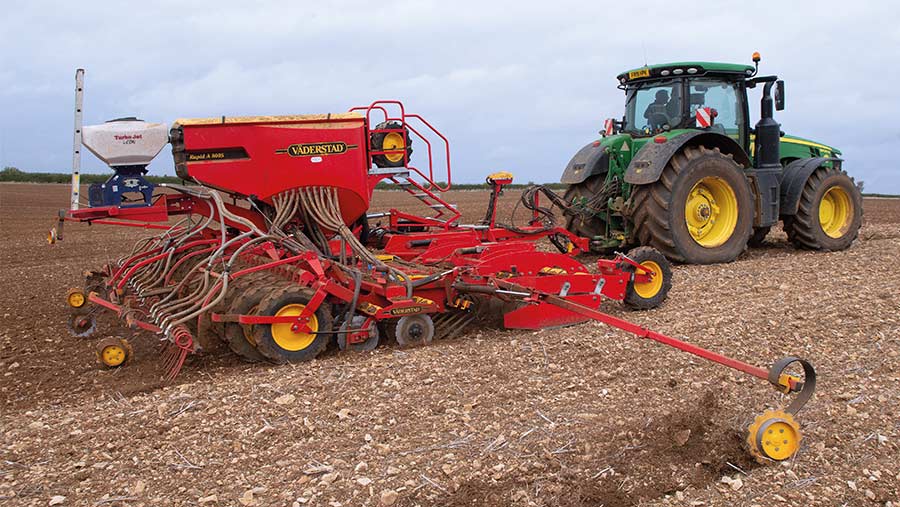 A season-long problem with yellow rust is threatening to unseat some popular winter wheat varieties as growers make their choices for harvest 2021.

Finding the disease at the juvenile or seedling stage need no’t be a concern if adult plant resistance kicks in later, usually at or around stem extension in the spring.

This year, however, that adult plant resistance has failed to come to the rescue in some varieties, as new strains of yellow rust make their presence felt.

As Lee Bennett, head of seed at Openfield explains, this very dynamic situation means that a variety’s yellow rust rating may not reflect its behaviour in the field, making it essential for growers to remain vigilant.

He names Zyatt, Skyfall, Spotlight, Insitor, Kinetic and Kerrin as particular problems, with both Gleam and Firefly carrying infection at the juvenile plant stage before fighting back later in the season.

Others have been more affected by the drought, he notes, with the stalwart hard feed variety Graham seemingly finding it tougher than others in very dry conditions.

“With yellow rust, growers should take a risk management approach,” he advises.

“Have a balance of rust susceptibility in your variety mix, heed any warnings and stay up-to-date with resistance ratings changes.”

His view is that the risk/reward situation must be considered carefully given the current economic climate and loss of fungicide chemistry.

“There’s no appetite among growers for spraying more often or having to resort to fire engine treatments.”

Clare Leaman, cereals specialist with Niab Tag, agrees: “In such a difficult year for growing crops, there’s potential to confuse whether it’s the variety or the season that is to blame.”

Newer varieties – even those that have already seen their ratings fall by a point or two – are particularly difficult to be confident about while race changes are occurring, she adds.

There is no change to the Group 1 category of bread-making wheats, with three established varieties – Zyatt, Skyfall and Crusoe – all having end-market appeal with millers.

Of these, Zyatt is one having an issue with yellow rust, says Mr Bennett, even though its rating fell by a couple of points last year to a 7.

Skyfall, too, is carrying yellow rust this year, but a 5 rating means that it has always been more susceptible to the disease.

It is also the only milling variety with resistance to orange wheat blossom midge.

Crusoe, while retaining its excellent 9 rating for yellow rust and the best record for hitting the milling specification consistently, has a 3 for brown rust.

“It’s the varieties that have come from Hereford crosses that are most affected, so that includes Zyatt, Insitor, Gleam, Shabras and Firefly.”

Extase is now finding its feet in the Group 2 bracket and the millers are expected to take a much closer look at it this year, reports Mr Bennett.

“Agronomics are having a big pull with varieties, and Extase has those in abundance,” he says.

Siskin is still in the game in this sector, he continues, where it tends to be grown as a feed wheat.

The huge interest in Extase won’t change for good reason, comments Mrs Leaman, who points out that it takes away some of the current uncertainty with its septoria score of 8.1. “It’s a low-risk but high-performing option.”

Having said that, brown rust was its talking point in 2019, while yellow rust has reared its head on the variety in 2020, she says.

“Samples have been sent in and testing will be fast tracked.”

The other Group 3 varieties have distinct weaknesses, with all of them being a fair bit lower than Firefly for septoria, points out Mr Bennett.

“Again, it’s about the risk/reward balance and the value of the overall package.”

Skyscraper continues to impress and is one of Mr Bennett’s favoured varieties, describing it as a “window box wheat”.

“It’s a great choice, looks good and has been selling really well.”

Its 5 rating for septoria is not a deal breaker, he adds, as it brings other attributes, including early maturity.

“It’s got a high yield of 104% and the agronomics are brilliant, with a 6.8 for septoria and a 9 for yellow rust, as well as midge resistance.”

Saki has a +3 for maturity, which he disputes.

“I don’t think it’s as late as that. Even so, it may not be an obvious choice for the North.”

Mrs Leaman is similarly impressed by Saki, pointing out that it solves the septoria issue present in the other two top-yielding soft feed wheats, Skyscraper and Spotlight.

“Its maturity is the same as Revelation, and growers have found ways to work round that.”

Both sound a note of caution about Spotlight, having seen it suffer from yellow rust this year.

Whether to stick with a stalwart performer or change to a risky newcomer is the main dilemma facing feed wheat growers this year.

Both Mr Bennett and Mrs Leaman believe there are good reasons for growers to stick to what they know, especially where flexibility and ease of management are required.

Joining the Recommended List this year at the top of the hard Group 4 category with yields of 105% and 104% are Insitor and Kinetic, respectively, while Theodore comes in towards the tail-end on 100%.

“Insitor is all about high yields,” says Mr Bennett. “But it might give you sleepless nights trying to achieve them.”

It’s a tall variety with questionable straw strength, while its yellow rust rating of 7 is under pressure.

“On the plus side, it has a septoria score of 6.6 and good grain quality.”

Kinetic is another variety with very high yield potential, along with early maturity.

However, its disease resistance profile is less impressive, warns Mrs Leaman, who suggests it is a higher risk choice.

“With an untreated yield of 79%, it isn’t necessarily taking growers in the direction that they want to go.”

Next come Gleam, Gravity and Kerrin, all of which have a loyal following.

However, the loss of chlorothalonil will make varieties with lower septoria scores more of a handful from now on, believes Mr Bennett, who picks out Gleam from the trio.

“Gleam had a good year in 2019 and is a flexible variety, suiting a range of soil types and sowing dates. It has a good septoria score of 6.3, stiff straw and midge resistance.

“If it holds itself together in terms of rusts, it will continue to be a good option.”

After four years, Graham remains popular and has been reliable, although it found the very dry conditions of spring 2020 more difficult than others and the leaves rolled up quickly, he adds.

Newcomer Theodore, with its lower yield, has the best septoria score on the Recommended List and should be recognised for that, says Mrs Leaman.

“It’s not quite the finished article though, and you do have to question why you wouldn’t grow Extase instead,” she remarks.

“It has a very low specific weight, which may be a problem if we have a poor grain fill period.”

Last, but not least, is Costello. “What a good starting point for any grower, who should have some Costello in the mix,” advises Mr Bennett.

“It’s not demanding, helps to manage risk and works as a cornerstone. It may not be the hero, but it’s never the villain.”

Winter wheat variety choice at the AHDB’s Taunton Monitor Farm for harvest 2021 will reflect the economic and environmental pressures being felt by the wider arable farming industry. 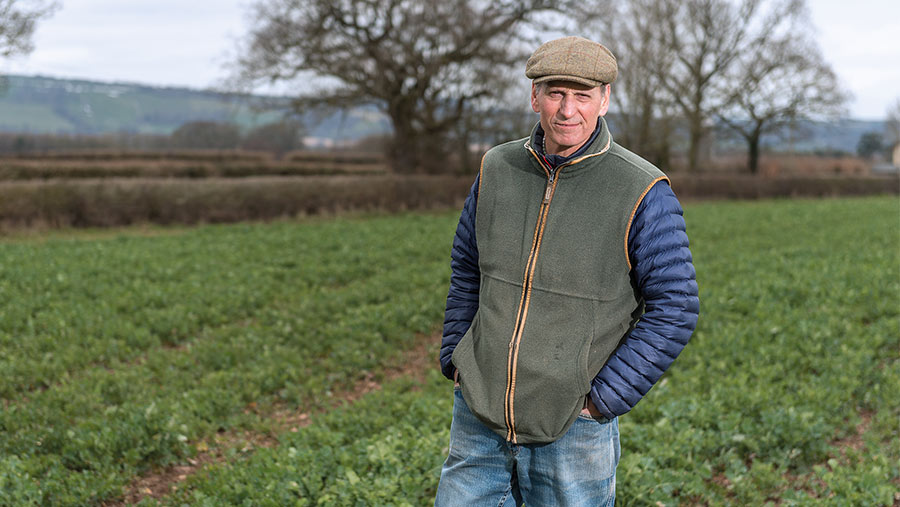 For grower Richard Payne (above), opting for robust varieties with good disease resistance ratings and agronomic characteristics is far more of a priority than chasing yield, as he strives to keep a lid on costs and reduce the need to spray.

“We don’t see the yield differences on farm that the Recommended List figures on different varieties suggest,” he says.

“As we can’t keep chasing yield at any cost, we look for robust varieties that have performed well in the South West.”

This year, he has Graham and Extase being grown in the first wheat position, with Skyfall and Gleam as second wheats.

Having initially been very pleased with the look of his September-drilled crops, they went backwards in the spring drought, losing biomass.

The remainder, which were drilled in “fits and starts” until mid-November, are more pleasing to the eye, he reports.

All are being grown for feed, after the decision was made not to make a late application of foliar nitrogen.

Mr Payne’s plan is to multiply up the Extase and the Gleam, growing more of both varieties next year.

“Extase has an 8 for septoria, whereas Graham has a 6, so it’s a move in the right direction. Gleam has done well in the region and could become our Skyfall replacement.”

He won’t, however, drop Graham completely. Having grown it for two years, he has been pleased with its consistency and has found it suited to the farm.

Yield expectations for this coming harvest vary from 8.5t/ha up to more than 9t/ha – below the farm’s 10t/ha five-year average.

A low disease pressure year has allowed him to keep fungicide costs in check, with about £65/ha being spent on disease control.

“The rain that arrived in mid-June made it warm and damp, so that decision was right. Without it, we would have lost grain specific weight.”

Oilseed rape is being dropped from the rotation for the next two to three years, after 60ha failed in 2019.

“Given the flea beetle pressure, it’s just too risky,” he says. “It’s a shame because it’s such a valuable break crop and we had some of our best yields with it the year before.”