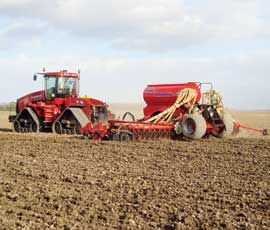 Precision farming is coming under close scrutiny at Velcourt. Two of the company’s farm managers share their findings with Louise Impey

Autosteer precision guidance has been in place for the last three years at Velcourt-managed Stamford Farms in Lincolnshire and manager Jason Turnbull is clear about the benefits.

“This business has a huge geographical spread – about 45 miles – and encompasses a range of soil types across 3,400ha (8,400 acres),” he explains. “So the accuracy that it brings to our field operations has been very valuable.”

The resulting reduction in overlap has been responsible for the use of less fuel and fewer crop inputs, he says. “The benefits have been financial and environmental, as well as easing the management burden and virtually eliminating operator error.

“Due to our geographical spread, too many repeaters were required from the base station, making RTK too expensive. To combat this, we have been using VRS RTK since last year, taking its signal from the phone modem.”

The same can’t be said about some of the other precision farming developments being used, he explains, as it’s harder to link them with results. But all have helped to streamline the farm’s paper trail and demonstrate accountability, neither of which should be under-estimated, he notes.

“There’s a great deal of paperwork involved in a modern farming business, all of which takes up a manager’s time and often involves duplication.”

Mr Turnbull is part of the Velcourt steering group on precision farming, so he’s had the opportunity to look at various options and compare different systems. He is also using variable nitrogen rate applications and yield mapping on the farm, but it is variable seed rate technology which he believes offers the most potential.

“We’ve got most soil types and almost every agronomic challenge – from resistant blackgrass to high slug populations,” he says. “So the seed rate technology, which is used in conjunction with soil type scans, is of interest.”

Being able to alter seed rate on the move is not a new concept, he comments. “We’ve always done it manually. But the electrical conductivity scanning of fields to produce soil type zones has made it more precise and means that human error can be taken out.”

He adds that matching seed rate to field zone potential should give more even crops. “It also allows us to overlay our weed maps and increase seed rate, where there’s bad blackgrass, for example, or to try and combat pest damage issues. Variable rate application of slug pellets is an exciting prospect and will seriously help us reduce our use of metaldehyde.”

Three different systems are being tested this year, reveals Mr Turnbull, with invited companies all scanning a field and producing a variable seed rate map. The fields have since been drilled according to the results.

Variable rate nitrogen applications are also being investigated at Stamford Farms, for mainly economic reasons. “We use £500,000 worth of fertiliser on this farm, so it’s very important that it’s being applied in the right place.”

Yara’s N-Sensor, SOYL and Agleader are in the line-up, all of which have comparable costs. “But the back-up and support varies, as does their ease of use,” comments Mr Turnbull.

Getting the crop canopy right by measuring it and then applying the optimum amount of nitrogen is the aim, he explains, as that should lift yields. “This technology isn’t necessarily about using less nitrogen, but it is about improved targeting.”

It’s also important to know when the land is not going to respond to more nitrogen, he adds. “That sort of detail can be picked up from yield mapping. There’s no point pushing an area which has underperformed consistently.”

At this stage, the issue he has with variable rate fertiliser applications is that he can’t guarantee that good results are due to the technology. “There are so many variables involved in growing a wheat crop, that a higher yield can’t be attributed to precision farming alone.”

Down in Wiltshire, from his base at Fonthill Estate near Salisbury, Velcourt manager Ed Whitton has also seen clear increases in efficiency with the use of autosteer precision guidance.

With responsibility for 3,400ha of combinable crops, the need to work long hours at peak times means that accuracy is greatly improved, he explains.

“With autosteer guidance, we’re always using the full widths of the machines and the operators have more time to concentrate on the task. It makes a real difference to quantity and, more importantly, quality.”

But, like Mr Turnbull, he is less convinced about other precision farming technology, mainly because it will take several years to quantify the benefits.

As a result, Mr Whitton has deferred the use of variable P and K fertiliser applications. “The soil testing cost is prohibitive and it has to be repeated. I’d rather invest in manures for P and K, and have the benefit of the organic matter.”

But he has been using Yara’s N-Sensor for the last few years. Sloping ground on chalky soils means that there is plenty of variation within the fields, so there is a clear case for varying fertiliser applications.

“Variable rates have been done for years by the operators,” he says. “But as scale has increased and greater demands are put on the staff, there is a benefit from automating operations where possible.”

The sensor scans the crop as it passes through, estimating the nitrogen content of the canopy and adjusting the nitrogen rate accordingly. “We’ve had a sensor working here for a while and this year we’ve equipped the other sprayers. So, in 2011, all of our nitrogen is going to be variably applied.”

The fact that it can be used to keep an accurate, spatial record of applications is a bonus, which could become more relevant in the future, he remarks.

One observation is that yield mapping should be the starting point. “I would advise any grower to begin with yield maps. Only by knowing if yield varies with a flat rate approach to inputs will you realise if varying rates is likely to have an impact on output or costs.”

Variable seed rates are of interest and he intends to make use of the technology this autumn. “It’s the same story as nitrogen rates. Our operators have been doing it for ages, but having the technology makes it more accurate and consistent.”

He plans to trial the technology before committing to it completely. “I can see its potential because we do suffer from variability, both within and across fields.”

Velcourt’s technical director Keith Norman believes variable seed rate technology is the most exciting, but points out that the huge cost of nitrogen fertiliser to the farming company means that applying the optimum dose is essential.

“We are doing some work this year to try and validate the recommendation that the N-Sensor gives, by comparing it to the results of strategically sited, small plot nitrogen dose response trials, where known differences in soil type exist.”

At Cereals held on 15 and 16 June, the Velcourt stand will feature wheat being differentially treated with nitrogen, with a motorised sensor on an overhead gantry scanning the crop.