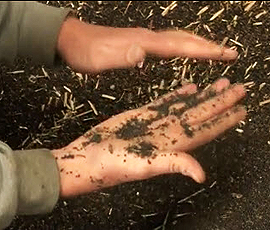 Harvest has finally finished on Andrew Brown’s farm in Rutland with the last of his oilseed rape showing a disappointing yield after 13 months in the ground.

It has been a mixed harvest for Mr Brown who only had wheat and oilseed rape to cut this year, but he says that considering the winter, the majority of his crop has performed better than expected.

The first 50% of his oilseed rape performed relatively well, achieving over 3.75/ha, however, the second part proved less successful.

Having spent so long in the ground suffering from the slugs, pigeons and weather, Mr Brown predicts it will yield between 1.25-1.8t/ha after being cleaned.

Drying and cleaning it will be the main focus now, however, he may not go down the conventional route to get his OSR in suitable condition.

“With 23% moisture and 29% admixture obviously, we have to dry it then we’ve got to have it cleaned.

“I have successfully cleaned beans by putting it in a JCB bucket and emptying slowly into a trailer on a windy day. Whether it will work with oilseed rape I don’t know.”

Mr Brown says with a lot of the admixture consisting of light fat hen seed it should theoretically blow away.

“It’s something we will try before paying money for getting someone in to clean it.”

The wheat crop however performed relatively well on Mr Brown’s farm with Santiago yielding just above 10t/ha and Viscount yielding only slightly less.

“I was quite happy with the wheat yields, however, I’m not so happy about the price. Being around £ 140/t.”